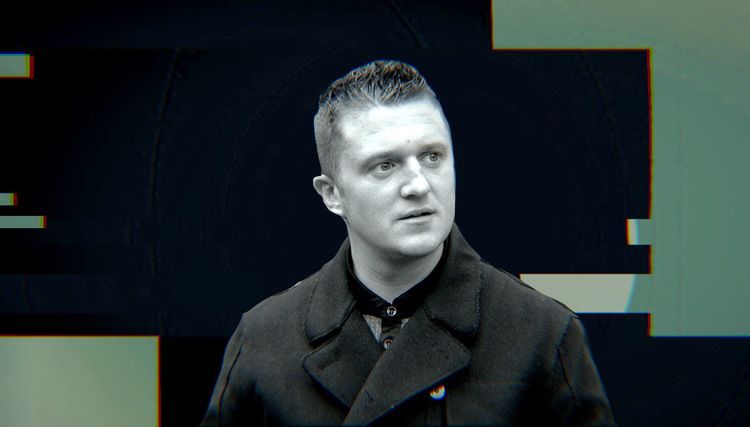 John Derbyshire: The “Dark And Dangerous” Side Of Anti-Nationalism Comes For Tommy Robinson—In Britain AND America

Yoram Hazony, author of the book The Virtue of Nationalism (and sparring partner of VDARE.com Editor Peter Brimelow) felt obliged to go on Twitter the other day to note that, quote:

For a look at what we have in store as the ideologues tighten their grip, glance across the Atlantic and consider the case of Tommy Robinson.

Tommy is an Englishman, 36 years old, from the town of Luton, thirty miles north of London. I remember Luton from my London days; it's on the main road from London to my home town of Northampton, and I passed through it often. Back then, in the sixties and seventies, it was a nondescript light-industrial town, the population white working-class English and Irish.

Later in the last century, when Tommy Robinson was in his teens, Luton was afflicted with mass immigration of Muslims from Pakistan and Bangladesh. Today the town is close to one-third Muslim.

So it's not very surprising that Tommy, in his twenties, became a nationalist. Tommy's a working-class lad with not much education, and he's a keen supporter of his town soccer team, so it's also not surprising that he came in at the rough, street-fighting end of nationalism.

He's cleaned up his act considerably the past few years, though, and focused his activism, sometimes a bit erratically, against the efforts by Britain's political and cultural Establishment to suppress all criticism of multiculturalism, of Islam, of anti-white policies, of mass immigration, of the European Union.

For this the Establishment and their Goodwhite stooges have targeted Tommy as an Enemy of the People. This week he got a prison sentence on a patently trumped-up charge of contempt of court. You can read the details in excellent reporting by Jack Montgomery and James Delingpole at Breitbart.com, or Ezra Levant at The Rebel Media.

You can fault Tommy for all kinds of mis-steps. You can even suspect he's a bit of a publicity hound.

I don't care: speaking as a working-class English boy myself, I say his heart's in the right place, and offer him my best wishes for surviving incarceration in a prison system run by homicidal Muslim gangs whom the British authorities are too cowardly to deal with.

Media personality Katie Hopkins, bless her, feels the same way I do. And then some: here she was telling us about going with Tommy to the courthouse for his sentencing.

Just for one moment in time I suddenly felt like Britain was alive again. Britain was surrounded … I was surrounded by people who thought like me, who missed the old country we used to know, who know right from wrong, who want to keep our daughters safe.

It felt like … I don't know, I felt like I was surrounded by the thing I most want back, which is real British spirit. And that's why I was so proud of for [sic] Tommy, even though he's the sort of sacrificial one, as we walked through the streets, just seeing people desperately reaching out to hold his hand, to touch him, to tell him to keep going, people trying to put money in his hand so he can buy snacks if he goes to prison …

Just, all of the faces, just faces of people desperate to have something to believe in, in a country that they don't really believe in any more …

He said to me—I was just talking to him just before he got sent down; and he really is, literally, sent down—he said: "You know, there's twelve murder cases here today in this court. I'm the thirteenth case, and I will wait till the end of the day. I'll be put in a van with twelve murderers and I'll be taken to prison."

All right, it's a little over-wrought. Lower the volume a bit on the Christian imagery there, Katie.

It touched my old English heart, though. And that warning to America at the end should touch yours. The nation-wreckers are arrogant and mighty, and they won't stop with England.

I know I've told this story before, but it bears telling again. I can't forget it, and I don't want it forgotten.

Twenty years ago, my mother was bedridden and near death. It was one of the last times I was with her, perhaps the very last time—I'm not sure. She was drifting in and out of awareness, sometimes just saying things out loud—random things, clear and coherent but not connected to each other.

So I was sitting there by the bed and heard her say: "I don't mind dying. At least I knew England when she was England."

Just, all of the faces, just faces of people desperate to have something to believe in, in a country that they don't really believe in any more …

Late breaking development: you don’t have to glance across the Atlantic to see Cult Marx repression of Robinson any more—our very own YouTube has just removed a video of Robinson addressing his supporters from Cassandra Fairbanks’ channel for, guess what, “Hate Speech,” and is threatening her with a permanent ban. [YouTube Removes Video of Tommy Robinson From TGP Reporter’s Channel, Says it Violates ‘Hate Speech Policy’, by Cassandra Fairbanks, GateWay Pundit, July 14, 2019]

Land of the Free.