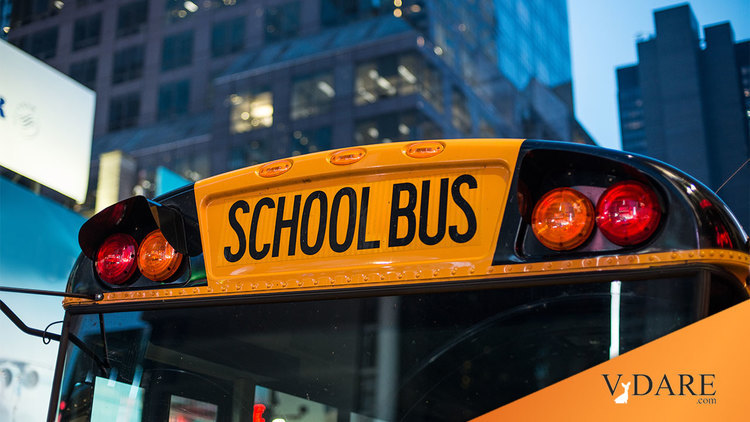 Busing Is Back, But White Kids Aren't

Sen. Kamala Harris leaped upward in the polls by denouncing Joe Biden for opposing racial school busing in the 1970s, citing how she was bused in Berkeley as a child.

Harris has since doubled down on busing, stating:

I support busing. Listen, the schools of America are as segregated, if not more segregated today than when I was in elementary school. And we need to put every effort, including busing, into play to desegregate the schools….

Ironically, Harris’ old Berkeley school district has today, despite its high level of integration, the worst test-score racial gap in the United States, with its median black student testing at only the fifth percentile of its white students.

As I pointed out in my 2016 Taki’s column “Crevasses in the Classroom,” a vast database assembled by Sean Reardon of Stanford’s Center for Education Policy Analysis demonstrates that the biggest racial divides in school achievement are found in highly liberal districts. By Reardon’s measure, the school districts with the biggest white-black gaps in test scores are: Berkeley, Calif., Chapel Hill, N.C., Evanston, Ill., Asheville, N.C., Washington, D.C., Atlanta, Ga., and University City, Mo., all intensely Democratic. …

In general, highly liberal school districts, whether in college towns, woke suburbs, or big cities, are worse for racial equality.

Amusingly, San Francisco is the opposite of Frisco, Tex., a sprawling Dallas exurb that has grown from 33,000 to 188,000 in this century. In contrast to highly gay San Francisco, Frisco, the weekday home to the Dallas Cowboys, has been called “the Best Place to Raise an Athlete.”

Ironically, while everybody in San Francisco hates when you call it by its unloved nickname “Frisco,” Republican-voting Frisco is much better at narrowing racial divides than is liberal San Francisco. Frisco has a white-black gap of only 1.4 years.

Frisco is San Francisco’s friendlier, less dysfunctional right-wing opposite. While San Francisco occupies perhaps the world’s most perfect spot for a city, Frisco is randomly plopped down on the prairie. San Francisco is an adult Disneyland with the lowest percentage of children of any city, while Frisco specializes in raising the next generation.