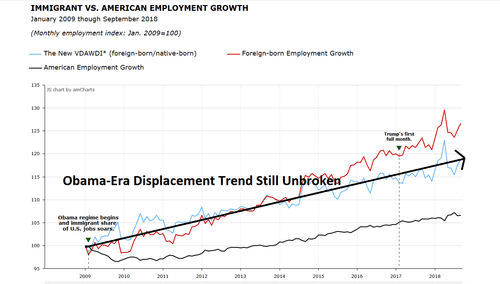 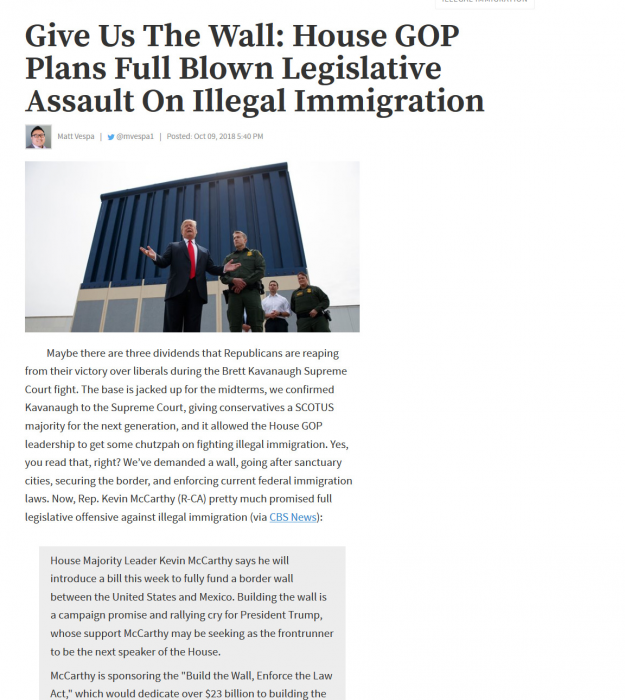 Finally, GOP House Majority Leader Kevin McCarthy says he will introduce a bill next week to fully fund President Trump’s border wall—with no Amnesty attached [Give Us The Wall: House GOP Plans Full Blown Legislative Assault On Illegal Immigration, by Matt Vespa, TownHall.com, October 9, 2018]. Not a moment too soon. September’s jobs data released shows that the “Trump Effect,” parrying immigration through a combination of jawboning and administrative tightening, has again flickered out—immigrants, legal and illegal, seized three-quarters of the month’s new jobs and the immigrant population soared by 1.5 million over the year, far in excess of estimated legal immigration and evidence that a new illegal surge is developing.

As usual, you wouldn’t know this from conventional commentary. The unemployment rate fell to nearly a 50-year low (3.7%), and employment rose for the 96th straight month. The MSM could not contain its pleasure:

By nearly any measure, today’s labor market is the strongest since the dot-com boom of the late 1990s and early 2000s. Job growth has repeatedly defied economists’ predictions of a slowdown. African-Americans, Latinos and members of other groups that often face discrimination are experiencing some of their lowest rates of joblessness on record.

If there were complaints, they concerned wage growth that is too low to lure marginal workers off the couch and into the labor force. “The strong job market is not yet pulling workers in off the sidelines, at least not enough to offset the exodus of retiring baby boomers,” writes the New York Times’s Casselman. [Email him]

Implication: We face a potentially crippling labor shortage. Jobs are rotting on the assembly lines!

Well, workers may not be coming off the couch, but their replacements appear to be crossing the border: the immigrant workforce population rose by 1.470 million in September year-over-year—the second consecutive month of 1 million+ growth. With legal immigration running at about 1 million per annum, this implies an illegal worker influx potentially in the hundreds of thousands. (See below.)

Payroll Survey job growth was only 134,000, well below the Wall Street consensus projection of 168,000. However, the “other” employment survey, of households rather than employers, found a robust 420,000 job gain for the month.

The overwhelming role of immigrants in filling those slots is clear. In September:

Relative to their immigrant competitors, September and August were dismal months for native-born Americans. While accounting for 82% of all workers in September, native-born workers received less than one-quarter of jobs created that month. In August they lost jobs while immigrants gained them.

By contrast, in May, June, and July all job growth went to native-born American workers.

Thus Trump has not undone the damage done by eight years of Obama. Native-born American workers lost ground to their foreign-born competitors throughout the Obama years. And, as seen in the chart above, this trend accelerated significantly in the months leading up to the 2016 election.

Trump has barely even broken the trend. Since taking office in January 2017, he has presided over a labor market in which immigrants have gained 1.444 million jobs, a 5.6% increase, while native-born Americans gained 2.437 million jobs—a rise of 1.9%. As far as the labor market is concerned, “America First” has not (yet) translated into Americans First.

The immigrant workforce population’s gain of 1.470 and 1.065 million in September and August is less than it might have been given the economic expansion—as recently as April. the influx was at 2.2 million. But immigrant workforce growth is still high in absolute terms: in contrast, it actually shrank in the last five months of 2017 when the Trump Effect seemed to be really taking hold.

These are net figures. Over a 12-month period an average of about 300,000 immigrants die and an equal number leave the U.S. voluntarily. So September’s 1.470 million net rise (year-over-year) in foreign-born population implies that an astonishing 2.070 million foreign-born individuals may have actually settled in the country over those 12 months. (This excludes tourists and other short-term entrants.)

Immigrants accounted for 17.6% of total employment in September. While below the all-time high of 18.1% recorded in April, the September figure is third highest among the 117 months for which we have data. 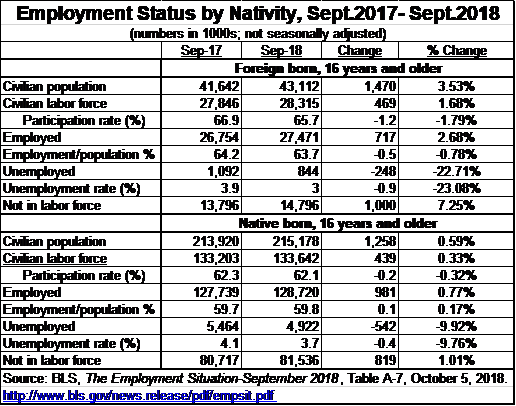 In August the Border Patrol apprehended 46,560 individuals attempting to enter the country illegally. (As noted above, September data is not yet available.) The good news: 2018 apprehensions through August are still below Obama’s catastrophic last years. The bad news: it’s clear that the collapse in the early months of Trump’s presidency was temporary.

We repeat: Over the long haul, only legislation, including a border wall to stop the illegal alien flow; a second Operation Wetback and E-Verify, to get the illegal alien self-deporting; and above all, a moratorium on legal immigration, can secure the fruits of the current economic expansion for Americans.

Which is why Rep. McCarthy’s bill is such good news.