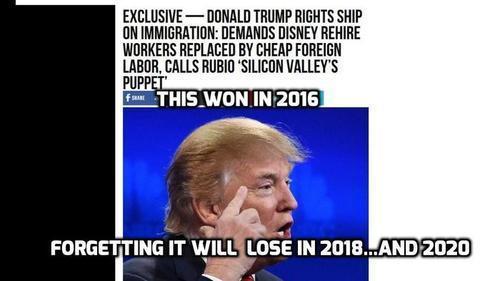 At a rally in Michigan last weekend, President Trump promised to bring in lots of guest workers to—I quote—"do your jobs."

Once, long ago, Trump was against replacing American workers with cheap foreign labor.

Back when Trump was invincible, he sounded more like this:

Breitbart News: "Hundreds of workers at Disney were forced to train their foreign replacements. ... [Rubio's new bill] has zero protections for American workers. ... Rubio's bill is even endorsed by the CEO of Disney. What do you think of Rubio's bill?"

Trump: "It's a disaster. It would allow any company in America to replace any worker with cheaper foreign labor. It legalizes job theft. It gives companies the legal right to pass over Americans, displace Americans, or directly replace Americans for good-paying middle-class jobs. ...

"I am calling TODAY on Disney to hire back every one of the workers they replaced, and I am calling on Rubio to immediately rescind his sponsorship of the I-Squared bill and apologize to every Floridian for endorsing it."

To paraphrase Ray Donovan, where do I go to get my Trump back?

Now that he's president and could actually implement all those great things he ran on, Trump sounds like Liddle Marco.

Liberals love to sneer about the bovine idiocy of Trump supporters, who are allegedly incapable of processing basic information. (See Evan Osnos, [Email him] every week in The New Yorker.) The dead silence that greeted Trump as he blathered about replacing Americans with guest workers proves that Trump voters are listening quite closely.

The president needs to understand, unless he drops his bizarre and totally uncharacteristic desire to bring in people to do your job, the voters might just bring in someone else to do his.

The plus side of the midterm elections is that liberals have gone mad. The minus side is that voters intensely hate Republicans. Liberal insanity is not going to save a GOP dead set on pleasing the donor class by screwing over ordinary Americans. As usual.

It was hatred for Republicans that drove millions of voters to Trump in the first place.

The same conservative talking heads who think the GOP is going to be fine by focusing on those great tax cuts – we'll get to immigration soon, promise!—spent the first six months of Trump's candidacy indignantly informing us that he was "not a Republican."

They said it was "unhealthy" for the party to be debating mass deportations. Trump "hasn't really stood for Republican things." The "summer of Trump" would come to a quick and deserved end. The danger, standard-GOP conservatives told us, was what Trump's candidacy "can do to the GOP brand." 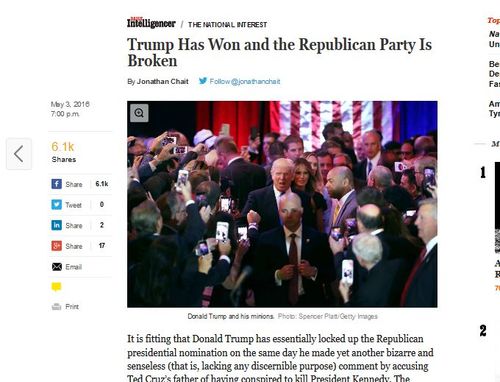 I thought the 2016 election would finally be enough to convince everyone that the Republican "brand" is not worth saving. It's like trying to buy the rights to the name "the U.S.S.R."

Trump won by making the election about all the things Republicans would never talk about. Principally, this was immigration. (Duh.) Trump also had a refreshing new approach to dealing with ISIS: Don't bring them here. This is what happens when you run around the world kicking over hornets' nests.

The cowardly GOP was too terrified of the media to ever run on any awesome issues. Only Trump did, and, for that reason, nothing could stop him.

But now he seems to think he can win the midterms by hewing to the loser wing of the Republican Party. We've got to save the GOP "brand"! What does Marc Short say? RUN ON TAX CUTS!

Yeah, that'll do it.

There's still time to hold the Democrats to a blue eddy this fall. All it takes is Trump keeping his promises on immigration and not starting a war. (Who could have guessed it would be so difficult for a president not to start a war?)

Every journey begins with a small step, and this one begins with Trump firing everyone in the White House. They're the ones who have encouraged him to ignore his promises for so long.

Even the "3-D chess" lunatics don't say, It's great that Trump is screwing over his voters, like Republicans always do! What they say is: Through some innate sixth sense, a higher vision, a third eye, Trump has an immensely complicated plan that you can't understand to make things come out exactly the opposite of the way they are currently headed.

Maybe. But if Trump doesn't do something major on his central campaign promise—not repainting border fences and telling us it's the wall—see you on Nov. 7.