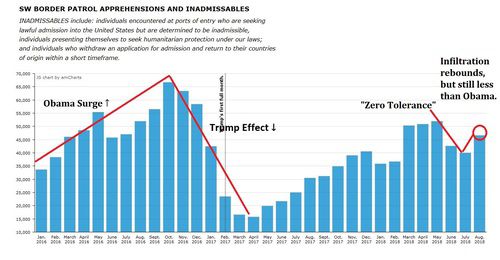 It is now clear that a quiet crisis is developing on the Southwest border. A September 12 Department of Homeland Security statement notes that, while the August jump in apprehensions was “consistent with an expected seasonal increase”—itself disappointing after President Trump’s election seemed to have broken the  pattern—the sharp increase in family units was “a clear indicator that the migration flows are responding to gaps in our nation’s legal framework” a.ka. judicial sabotage. Moreover, the recently-released jobs data revealed that August was not kind to native-born job seekers. The unavoidable conclusion: administrative remedies and jawboning—what we have called the “Trump Effect”—can only slow, not reverse, America’s immigration disaster. Ultimately, legislation is essential.

The Household Employment Survey, which unlike the more commonly cited Payroll Survey records the nativity of respondents, reports a total job decline of 423,000 in August. This, of course, is a jarring departure from general Payroll Survey euphoria—it reported job growth of 201,000—and calls into question the notion that incessant efforts to thwart Trump’s power have not diminished our economic mojo.

Three good months do not a trend make. Neither does one bad month: we expect the Trump Effect to reassert itself in coming months.

But Trump has not yet even begun to repair the damage done by eight years of Obama. Native-born American workers lost ground to their foreign-born competitors throughout the Obama years. And, as seen in the chart above, this trend accelerated significantly in the months leading up to the 2016 election.

Trump supporters have reason to be restless: Since taking office in January 2017 President Trump has presided over a labor market in which immigrants have gained 1.124 million jobs, a 4.3% increase, while native-born Americans gained 2.3 million jobs—a rise of 1.9%. As far as the labor market is concerned, “America First” has not yet translated into Americans First.

Another troubling sign: after growing by less than 1 million in June and July, the immigrant workforce population rose by 1.065 million in August (year-over-year). As recently as April the influx was at 2.2 million, so the short-term trend is still favorable. However, immigrant workforce growth is still high in absolute terms: in contrast, it actually shrank in the last five months of 2017 when the Trump Effect seemed to be really taking hold.

These are net figures. Over a 12-month period an average of perhaps 300,000 immigrants die and an equal number leave the U.S. voluntarily. So August’s 1.065 million net rise (year-over-year) in foreign-born population implies that about 1.665 million foreign-born individuals may have actually settled in the country over those 12 months. (This excludes tourists and other short-term entrants.)

Immigrants accounted for 17.4% of total employment in August. While below the all-time high of 18.1% recorded in April, the August figure is ninth highest among the 116 months for which we have data.

The renewed illegal alien surge that began last year seemed to be abating. Border Patrol apprehensions peaked at 51,905 in May 2018, then fell to 42,838 in June, and 39,953 in July. But in August they rebounded to 46,560. The good news: this is still below Obama’s catastrophic last years. The bad news: it’s clear that the collapse in the early months of Trump’s presidency was temporary.

Over the long haul, only legislation, including a border wall to stop the illegal alien flow; a second Operation Wetback and E-Verify, to get the illegal alien self-deporting; and above all, a moratorium on legal immigration, can secure the fruits of the current economic expansion for Americans.