Latino Border Agent Is Accused Of Being A Race Traitor, Despite His Lack Of interest In US Sovereignty

The whole idea of America’s autonomy as a nation gets zero attention in a recent New York Times article about Francisco Cantu, author of The Line Becomes a River: Dispatches from the Border. Instead, the focus is on the anger of fellow Hispanics who see him as a snake who works for the evil American government, foiling the illegal aliens’ pursuit of free stuff in the welfare office to the north.

Despite being a “third-generation Mexican-American” as characterized in the piece, Cantu is expected by Hispanics to be loyal to his race, not to his nation of citizenship. This attitude should alert us to a strain of disloyalty among Hispanics who come for the dollars and little else. According to a 2012 Pew poll, only 21 percent of Hispanics say they frequently use the term “American” to describe their identity:

Interestingly, Cantu is an unlikely target of Mexican racists, since he is not a great enthusiast for the border, US sovereignty or anything American. A February 12 PBS Newshour report (How this former Border Patrol agent learned to see through the eyes of those trying to cross) revealed him to be more an academic observer than a friend of law enforcement:

CANTU: “I still have a lot of the same questions that I came into the Border Patrol with. I really see the border as, like, a microcosm for all of these huge issues that we’re grappling with as a nation and as a global society. And so I have no urge to look away from the border.” 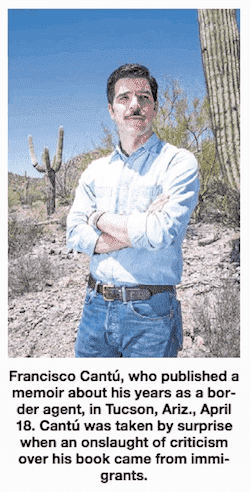 What is completely missing from Cantu or the Times is any concern with the mission of the Border Patrol, namely to protect the United States from enemy jihadists and an invasion of job thieves. American workers have suffered decades of lowered wages and outright job loss because of excessive legal and illegal immigration — where’s the sympathy for them? There’s none at the New York Times, where traditional Americans are regarded as an inconvenient block to a diversity utopia run by Democrats.

The New York Times title for the piece is “Border Patrol Memoir Ignites Dispute: Whose Voices Should Be Heard From the Frontier?” while the reprint below emphasized the tribal angle — which reflects how liberals have so many complaints about borders and sovereignty.

TUCSON, Ariz. — Writer Francisco Cantú, who spent years as a Border Patrol agent, braced for the fury of anti-immigration figures and his former colleagues when he published a haunting memoir this year delving into authorities’ frequent abuse of immigrants in the Southwest borderlands.

But when such reactions were muted, Cantú wasn’t prepared for the onslaught of criticism he received from the other end of the political spectrum, including undocumented writers and artists around the United States who view the Border Patrol as a paramilitary force inciting fear and destroying families.

Some called Cantu, 32, a third-generation Mexican-American, a “Nazi” and “traitor” for joining the Border Patrol in the first place. Others appeared at readings of his book in California and Texas, drowning out the events by screaming “vendido” — sellout — in his direction. Critics suggested boycotting Cantú’s book, “The Line Becomes a River,” branding him a quisling who profits in others’ blood.

“I don’t see why Cantú gets to be absolved and celebrated by saying he paid witness to the tragedy he was complicit in upholding,” said Jesús Valles, 31, a playwright and public high school teacher in Austin, Texas, who was among those protesting when Cantú recently traveled to Texas for book signings.

“It’s hard to even explain the fear that the Border Patrol instills in people like me,” added Valles, who was smuggled into Texas as a child before obtaining, years later, legal authorization to remain in the country. “It’s a dread of being hunted down like an animal, of seeing your siblings deported. And Cantú gets a fancy book deal after being one of the guys holding the guns.”

The simmering tension around Cantú and his book is igniting an energetic debate over who gets rewarded for telling stories of life along the border, highlighting quarrels between Latinos born in the United States and those who were brought illegally to the country as children as President Donald Trump’s polarizing border wall starts to take shape in the Chihuahuan Desert.

In a twist to the wrangling over his book, Cantú has caught some of his most strident critics off guard by thanking them and siding with them. In public appearances, he has asked that protesters be allowed to speak derisively of him and his book. And in an interview here in Tucson, where he lives, Cantú said he agreed with some of the charges leveled against him.

Still, an overriding influence for Cantú was his own mother, a former park ranger in the Guadalupe Mountains near El Paso. She tried to dissuade him from joining the Border Patrol, and when that didn’t work, she questioned her son about the cruelty of agents who allow migrants to die in the desert.

“She was concerned for the health of my soul,” Cantú said.