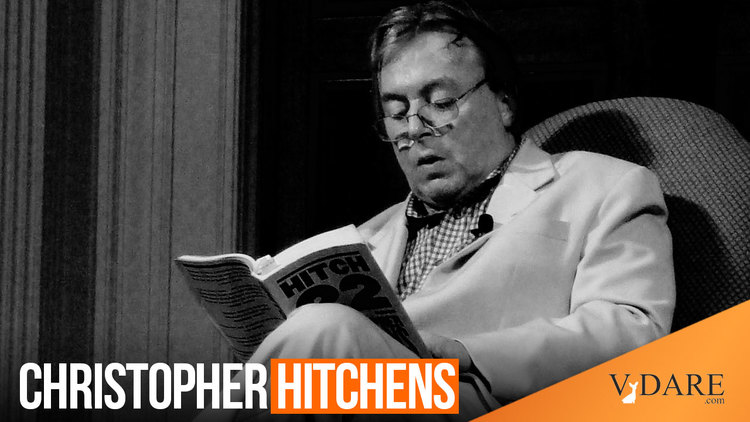 Hitchens And Us: Memories of Christophers Past

Back before Hitchens gave up Trotskyism, (something he never really renounced or apologized for) for neoconservatism, he reviewed Alien Nation for the LA Times,  and Peter Brimelow reviewed Blood, Class,  and Nostalgia for National Review.

"Christopher Hitchens is perhaps the most notable contemporary specimen of what has been called the Bollinger Bolshevik. An English leftist now immigrated to Washington, D.C., he nevertheless has his work published in the most fashionable American glossies, and his new survey of the Anglo-American relationship sports a dust-jacket biography (invariably author-supplied) carefully pointing out that he was educated not merely at Oxford but at Balliol, perhaps the most patrician college there. As with Alexander Cockburn, this combination of socialism and snobbery—backed, it must be said, by talent and a Protestant work ethic both would affect to despise—has quickly established him at the top of American liberaldom. " [Anglo-American Ironies, National Review, August 6, 1990 ]

“The first requirement of any person commenting on immigration is, it seems, that he or she say what is really on his or her mind. Peter Brimelow meets this requirement very early on in his book. Reviewing the case of the Pakistani who opened fire outside the CIA headquarters in Virginia, of the Muslim militants charged in the World Trade Center trial and of Colin Ferguson, loony of the Long Island Railroad, he says:

"The fact cannot be denied: if Ferguson and the others had not immigrated . . . 14 Americans would not have been killed."

This is like Thornton Wilder's literary meditation on the fall of the bridge of San Luis Rey. You could equally say that since the Pakistani suspect in the CIA case was an applicant for political asylum, the United States ought to cease offering political asylum, or that since the World Trade Center gang were mostly rogue CIA elements brought to America as a consequence of the Afghan civil war, the answer would lie in the shutting-down of overseas covert operations.” [From Melting Pot To Potpourri, May 21, 1995]

Both the bit about calling Arabs in the first  World Trade Center attack “rogue CIA elements”—not provable or even credible, as far as I know—and even more, the fact that he called the Russian invasion and occupation of Afghanistan the “Afghan Civil War” represent the old, unreconstructed Hitchens.

When I archived that review, I saw that and thought “What in the world was he thinking of?” I still don’t know, but Daniel Pipes, in a blog update he  titled Christopher Hitchens dies, feud ends, reminds us that Hitchens insisted on believing in Gary Sick’s “October Surprise” theory, that “in October 1980, Ronald Reagan conspired with the Islamic Republic of Iran to beat Jimmy Carter in the U.S. presidential elections on 4 November.”

A man who could believe that could believe anything, and has no business making fun of Mormons for believing the plates of gold story.

Hitchens was, like a lot of British immigrants, an enthusiastic American. Like Peter Brimelow, he was an admirer of that earlier British immigrant Tom Paine. But he lacked the appreciation that Brimelow, John O'Sullivan, and John Derbyshire have that America is more than an idea, it is in fact a nation. In the 1995 Alien Nation review he wrote that

"Speaking for myself, I didn't come to America in order to join another Anglo-Saxon condominium. My rather odd neighborhood in Washington would be dull as rain, as well as economically unworkable, if it were not a multinational community. The stresses are there, and I must admit that I recognize some of them in Brimelow's pages. But I'm willing to bet that some of the consequences of an ill-designed haphazard policy, no less unintended, will turn out to be an agreeable surprise."

I'm afraid that even if he had lived a lot longer, he would still have lost that bet.