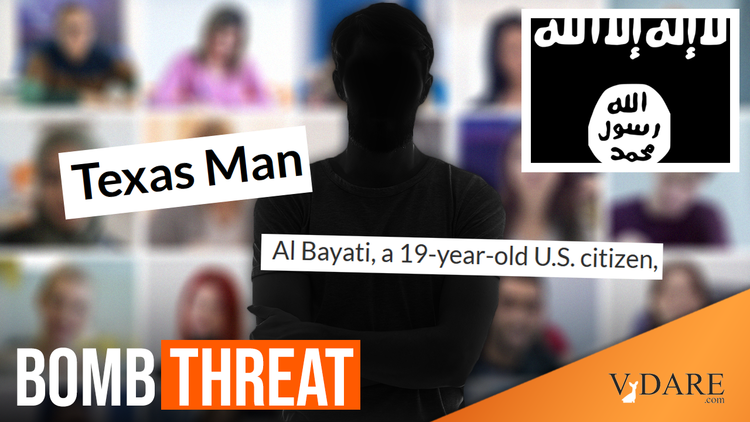 The CBS/Dallas-Fort Worth headline today is

HOUSTON (CBSDFW/AP) – A man was arrested after he was accused of making a bomb threat against the University of Houston during a Zoom lecture.

Al Bayati is accused by federal authorities of joining a university lecture on Zoom on Sept. 2 and interrupting it by saying “what does any of this have to do with the fact that UH is about to get bombed in a few days?”

Al Bayati, a 19-year-old U.S. citizen, told investigators the incident was a joke devised by him and a friend, according to a criminal complaint.

When an illegal alien kills or rapes someone, it's very hard to find out what his citizenship status is. When a Muslim born in the US commits any kind of terrorism, it's immediately announced that he's a US citizen. This is a pattern (right, a screenshot Steve Sailer took of an NYT story about the Orlando Massacre):

Al Bayati, who identified himself as Abu Qital al Jihadi al Mansur on the call, was also accused of uttering an Arabic a phrase that means the “Islamic State will remain,” according to a criminal complaint. Investigators allege his discussion about the “Islamic State” was a reference to the terrorist organization.