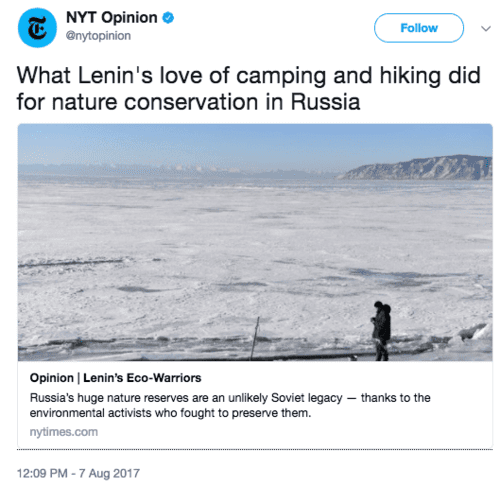 Newsflash from The New York Times: Women may have starved under socialist regimes, but their orgasms were out of this world!

That's the creepy gist of one of the Grey Lady's recent essays this summer hailing the "Red Century." The paper's ongoing series explores "the history and legacy of Communism, 100 years after the Russian Revolution." When its essayists aren't busy championing the great sex that oppressed women enjoyed in miserable Eastern Bloc countries, they're extolling Lenin's fantabulous conservationist programs and pimping "Communism for Kids" propaganda.

Since this is back-to-school season, it's the perfect time to teach your children about faux journalism at the Fishwrap of Record. As the publication's pretentious own new slogan asserts, "The truth is more important than ever."

While the Times hyperventilates about the dangers of President Trump's "art of fabrication" and "Russian collusion," this is the same organization whose famed correspondent in Russia, Walter Duranty, won a Pulitzer Prize for spreading fake news denying Joseph Stalin's Ukrainian genocide.

An estimated 10 million men, women and children starved in the Stalin-engineered silent massacre between 1932-1933, also known as the Holodomor. Stalin had implemented his "Five Year Plan" of agricultural collectivization—confiscating land and livestock, evicting farmers, and imposing impossible grain production quotas. At the peak of the famine, about 30,000 Ukrainian citizens a day were dying. Untold numbers resorted to cannibalism.

But you wouldn't know it if you perused all the phony ground reports filed by Duranty at the time. Based in Moscow since 1921, Duranty gained access to Stalin for a rare interview in 1930. Two years later, Duranty won the Pulitzer Prize for 13 typewritten tongue baths with titles including, "Stalinism Solving Minorities Problems," "Industrial Success Emboldens Soviet in New World Policy," and "Stalinism's Mark is Party Discipline."

And the rest is whitewashed history.

"There is no actual starvation or deaths from starvation, but there is widespread mortality from diseases due to malnutrition," Duranty asserted in March 1933.

Five months later, he wrote: "Any report of a famine in Russia is today an exaggeration or malignant propaganda."

Meanwhile, Duranty "had all the Beluga caviar that he could eat," Lee Edwards, a distinguished scholar and chairman of the Victims of Communism Memorial Foundation in Washington, D.C., told my CRTV.com show, "Michelle Malkin Investigates."

Historian Ron Radosh of the Hudson Institute added: "What (Duranty) did is file totally false, fake stories about how the people were thriving and doing well under Bolshevism and nothing was wrong and any rumors you hear of a famine in the Soviet Union were totally false, made up by enemies of the regime who wanted it to fall."

Robert Zapesochny, a New York writer and historian whose own grandfather survived the famine, blasted Duranty's pursuit of the prize over pursuit of the truth: "As long as there was an award that he could get for his coverage he would do anything." Zapesochny minces no words about Duranty:

But Robert Conquest, the whistleblower who chronicled Duranty's agitprop in his book The Harvest of Sorrow, noted that the Times still clung to their Commie correspondent and his lethal lies, lauding his "dispassionate, interpretive reporting of the news from Russia" a half-century after being debunked.

Now, 85 years after Stalinist tool Duranty snagged his Pulitzer (which the journalism pooh-bahs refuse to withdraw and the Times' editors refuse to renounce), the paper has the gall to lecture everyone else about truth, lies and accountability. And it's still shilling for collectivism.

The Red York Times: First in fake news and progenitor of alternative facts.