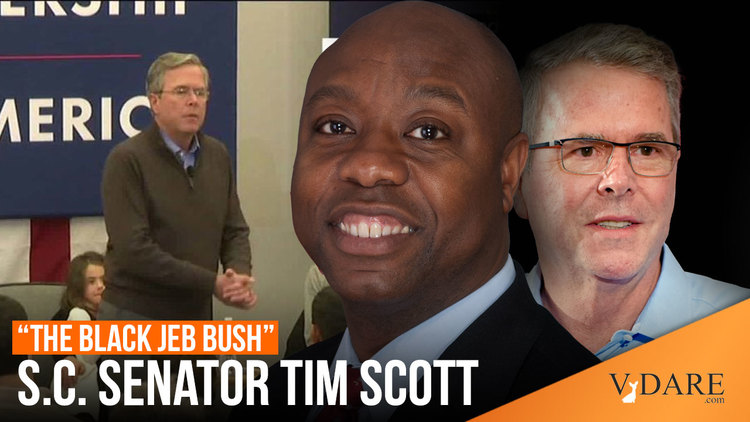 I've been expressing my boredom and disgust with the State of the Union speech (yeah, yeah, I know: Joe Biden's Wednesday speech wasn't billed as an official State of the Union address, but I don't see how you can say it wasn't one) for, according to my archives, at least fourteen years, and I don't feel like repeating myself. As now ritually performed it is, as I sputtered in my 2009 classic We Are Doomed, a Stalinesque extravaganza, and a disgrace to a commercial republic of free men.

Biden's speech was an incoherent sprawl of stitched-together clichés. I think the only one Joe missed was "coming out of the shadows," the usual way—he's used it before—to promote Amnesty for illegal aliens. I was waiting for it, but it never came. Perhaps Biden just forgot.

More interestingly, in a typical display of moon-booted virtue signaling, the Republican Party put forward their only black senator, Tim Scott of South Carolina, to respond to the president.

I knew nothing about Senator Scott, and I now, after ten minutes internet browsing, know only a little more than nothing. That browsing included the transcript of his Wednesday night speech, which I didn't sit through live [Sen. Tim Scott’s plea to the nation — ‘America is not a racist country’, NY Post, April 29, 2021].

If there's a Republican who comes to my attention nowadays, the main thing I want to know is: what kind of Republican is he? Is he an Open-Borders, neocon, front man for the Cheap Labor lobbies? Or is he a principled patriot willing to buck the party bosses and spit in the eye of the Regime Media?

The key issue is of course immigration. I did Ctrl-F for "immigr" on Scott’s speech transcript: no hits. Hmm. Try Ctrl-F "border." That got one hit:

Weakening our Southern borders and creating a crisis is not compassionate.

Compassionate? That sets off a whole carillon of alarm bells … and excuse me while I pause here to mark up my bonus points for being the first VDARE.com contributor to use the word "carillon" … thank you.

The only proper object of the federal government's compassion is the American people. I don't want my government to practice cruelty, certainly not on children; but if foreigners and/or their children violate my country's laws by entering illegally, or remaining illegally after their visas have expired, I want them repatriated swiftly and humanely. Private persons who feel compassion towards these trespassers should by all means be allowed to offer them private relief, but not in any way that interferes with the repatriation process.

I'm guessing Senator Tim Scott doesn't agree with that. But let's give the guy a fair chance; let's go over to NumbersUSA and look up his report card on immigration legislation.

OK, what are his congressional report card grades on immigration? When I go to the NumbersUSA website and look up his "Career" grade, it's A-plus, with As and A-pluses all the way down on particular immigration-related sub-issues.

But then, when I click on the "Recent" tab for his votes in the Senate, 2019 to 2021, he's a D-minus! There are just three grades on particular sub-issues: a D on "Reduce Unnecessary Worker Visas," another D on "Reduce Illegal Jobs and Presence," and, oh dear, an F-minus on "Challenging the Status Quo."

I haven't yet been able to make much sense of that. Is the fact of his senior colleague in the Senate being Lindsey Graham something to do with it? Senator Graham is a career C-minus, also a recent C-minus.

I don't know, and shall reserve full judgment until I do. Meanwhile I have tagged Tim Scott in my mental file as definitely not a black Josh Hawley (who is both a career and a recent A-minus on the NumbersUSA report cards).

Tim Scott, unless I turn up evidence to the contrary, is probably more like a black Jeb Bush.