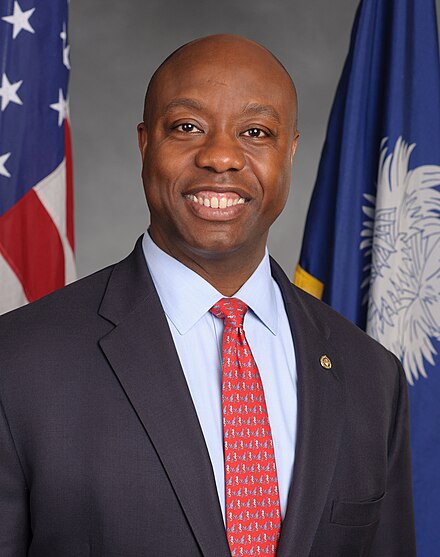 In the first instance, of course, naming this profoundly under qualified one-term  Black Congressman to be Senator is an exploitation of yearning for the “Magical Negro” phenomenon – the product of the endless Hollywood/MSM evocation of brilliant Black Heroes/Geniuses/Mentors who simply do not exist in real life.

The GOP Establishment - and some of the electorate - appears very susceptible to this ridiculous infatuation – as seen the Michael Steele fiasco, the Colin Powell humiliation and the Herman Cain crush. Also, in of course, the protracted campaign to exclude white men from the RNC Chairmanship – until needed to cover up.

Scott attended Presbyterian College from 1983 to 1984, and graduated from Charleston Southern University in 1988 with a Bachelor of Science in Political Science.

This is the Stupid Party in action.

Unfortunately Negromania not actually the real explanation. Governor Nikki Hailey is a non-white Neocon Protégé. So was Tim Scott: according to Wikipedia (until they change it)

The Club For Growth is a Die-Hard NeoCon Front. Cantor is simply bad news. Naturally, this abrasive rejection of the Affirmative Action issue will simply drive away white voters more

The sad reality is that the South Carolina GOP apparatus has been taken over - or bought. How else to explain Lindsay Graham (RINO-MSM)?

In fact, the combination  of two Senatorial races in 2014 will probably effectively protect Graham.

And alas, unless Jim DeMint does something serious with the Heritage Foundation, in my opinion his reputation will have been destroyed. Without his abrupt retirement, this issue would not have occurred. Every man, it seems, has his price.

What Patriots have to recognize is that the preventing White Leadership emerging has been central to the objectives of their enemies, for a long time. Scott is just another step.