Does Tim Scott's Numbers USA `A` Ranking Mean Anything? 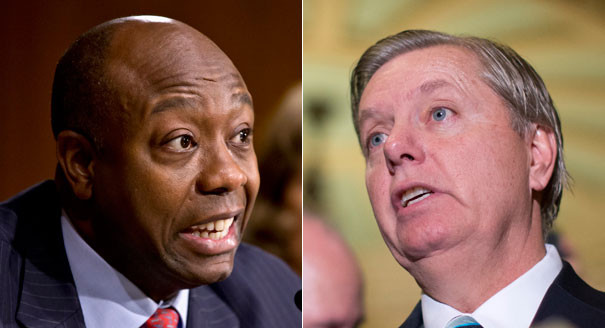 S.C's Lindsey Graham and Tim Scott: Two of a kind?

Shortly after posting Senator Tim Scott - "Magic Negro" Mania Gives SC Two RINO Senators? I received an angry email from a credulous reader outraged that I had dared to be skeptical about this latest iteration of the GOP's “Magic Negro” infatuation. Also complaining that I did not mention that Scott in his two (2) years in Congress has acquired an ‘A” rating on immigration from NumbersUSA.

I should have dealt with this—which actually only puts Scott in the middle of the excellent South Carolina GOP delegation—because the objective evidence is that it is probably a fraud perpetrated by the Scott groomers. Not having an acceptable NumbersUSA ranking would have been a dangerous red flag.

The House leadership in the 112th Congress of course betrayed those who put them in power and did nothing on Birthright Citizenship, Official English and E-Verify—even the probably impeachment-worthy Administrative Amnesty went unchallenged. “As”, alas could be earned by actually doing very little.

But some brave men like Mo Brooks and Lou Barletta did speak up, repeatedly. Scott did not. Neither did he sign the  amnesty blocking Bills proposed by Congressmen Schweikert, Quayle and Lamar Smith, an acid test of seriousness.

What he did do was snuggle up to  the House Leadership, as gushingly recounted in House GOP Favorite Tim Scott Is Ready For What Comes Next By Ben Terris National Journal March 29, 2012 (subtitled "Tim Scott has become a favorite of the House GOP leadership")

He is a deputy whip and a freshman-class liaison to the leadership, and he sits on the powerful Rules Committee…

“Tim is closer to leadership than we are because he is at the table,” said Rep. Jeff Duncan, another freshman Republican from South Carolina. “He has more of an opportunity than we’ve had because of his role.

“His role” of course is to be a Professional Black. The 112th House Leadership absolutely hates Patriots and if that “A” ranking was more than a fraud Scott would be an outcast.

The fact is that all the GOP Magical Negroes—Colin Powell, Michael Steele, Herman Cain - have been embarrassing disasters or at best ciphers like Condi Rice. The outstanding exception has been Clarence Thomas. It may not be an accident that he has a strong white wife.

Tim Scott on the other hand, at 47 is unmarried. None of the publicity pieces about him have any specifics of women in his life. He shares this characteristic with South Carolina’s prize RINO, Senator Lindsey Graham. You might say they make a couple.

The problem with all this is that South Carolina is a really conservative state. It could be a safe base for a serious leader for the Generic American party. Preventing such a leader emerging is a top Neocon priority. That is why Tim Scott is being foisted on the electorate, and no doubt (alas) why Jim De Mint after a peculiar silence in the 2012 Primary season is going off to earn a reputed 7 figures at the Heritage Foundation.