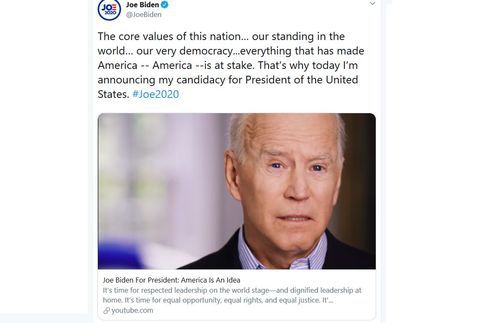 Former Vice President Joe Biden is set to announce his third presidential run this week. He currently sits atop the national polls and is often seen as a relatively moderate and safe candidate—even Rush Limbaugh says he’s the Democrats’ “best chance” although the party is now too radical to nominate him. [Rush Limbaugh: Biden is Democrats' best chance at beating Trump ... but he has no chance because of Dems, Foxnews.com, April 24 2019]  Even if nominated, however, Biden would have to contend with his long record of disastrous weakness on immigration.

Biden is an old white guy with a past record that offends woke Leftists. As a senator, Biden pushed tough-on-crime bills that Leftists argue led to mass incarceration and allegedly racist policing. He championed three-strike rules that put more minorities in prison and championed the death penalty for drug dealers. [In the Space of One Minute, Joe Biden Defends the Death Penalty for Drug Dealers, Asset Forfeiture, and Mandatory Minimums, by Christian Britschgi, Reason, April 4, 2019]

He even attacked Republicans for being soft on crime. [Democrats Criticize the Drug Plan As Lacking Toughness and Money, New York Times, September 6, 1989]

Here's the national 1989 speech Sen. Joe Biden gave where he attacked President Bush 41 for being soft on crime and drugs, & demanded more prosecutions & prison for drug dealers & *users*: led not only to the 1994 Crime Bill but major escalation of the Drug War & Penal State: pic.twitter.com/sg36rV30Zz

In the 1970s, then-Senator Biden led the fight against busing and was instrumental in passing Senate legislation that defanged school integration efforts. He claimed busing was racist because if assumed blacks and Hispanics could only learn if a certain number of whites were in class with them. He said forced integration led to racial hatred among “people who aren’t racist”.

Furthermore, he said whites don’t owe blacks anything. “I do not buy the concept, popular in the ‘60s, which said, ‘We have suppressed the black man for 300 years and the white man is now far ahead in the race for everything our society offers. In order to even the score, we must now give the black man a head start, or even hold the white man back, to even the race.’ I don’t buy that,” he told a Delaware newspaper in 1975, according to The Washington Post. [Biden’s tough talk on 1970s school desegregation plan could get new scrutiny in today’s Democratic Party, by Matt Viser, The Washington Post, March 7, 2019 and Transcript of then-Sen. Biden’s interview with The People Paper, March 7, 2019 (PDF Full Text)  ]

These are opinions that are just not going to play well in the modern Democratic Party. He’s already apologized for his old criminal justice views and more groveling will certainly come. [Biden: 'I haven't always been right' on criminal justice, by Arlette Saenz, CNN, January 21, 2019]

But while Biden may have once been sensible on crime and busing, he was never good on immigration.

The only good things he did are a few votes over a nearly 40-year Senate career and a past belief in border security. NumbersUSA gave him a D for his career voting record.

The two immigration achievements of Biden’s long Senate career were voting for the Illegal Immigration Reform and Immigrant Responsibility Act of 1996 [IIRIRA ] and the Secure Fence Act of 2006 [SFA].

IIRIRA made it easier to deport criminal aliens and made it harder for illegal aliens to gain legal status. SFA beefed up border security and constructed some wall (funding was inadequate) along the U.S-Mexican border. Both of those bills garnered bipartisan support.

That’s it for Biden’s highlights. The rest of Biden’s Senate career is a series of votes against the American people. In 1983, he voted against a bill that would have denied state benefits to illegal immigrants. In 1986, Biden voted for Ronald Reagan’s Amnesty. He voted for the catastrophic Immigration Act of 1990 that dramatically increased immigration and accelerated America’s demographic transformation. That same year, he also voted to count illegal aliens in the census. In 1996, he helped water down IIRIRA to ensure it did not limit legal immigration in any way. In 2006, he voted for Amnesty (again) and against making English the official language. [Joe Biden, Anti-Immigrant Enabler, by Branko Marcetic, Jacobin, April 4, 2019]

As Barack Obama’s vice president, Biden dutifully championed the liberal immigration policies of the administration. He supported the DREAM Act and the failed Gang of Eight amnesty of 2013. He said that the Amnesty was a “tough decision” America had to make. “In the United States, that means reforming our immigration system—11 million undocumented men, women and children being able to come out of the shadows and be full participants in American life,” he said at the time.

Biden also claimed Amnesty was necessary in order to show respect to the countries where most illegal aliens come from. [Biden: Immigration 'about dignity', by Kevin Cirilli, Politico, May 8, 2013]

The then-vice president celebrated white demographic replacement on multiple occasions. This triumph, which he incorrectly thought would happen in 2017, would be a sign of America’s strength.

“Whites will be an absolute minority in America… that’s not a bad thing. That’s a source of our strength,” he said at a 2015 meeting with then-Brazilian President Dilma Rousseff.

"Ladies and gentlemen, in 2017, the United States for the first time, Caucasians of European descent like me will be in an absolute minority in the United States of America,” he said during a 2014 visit to Morocco. “The secret that people don't know is our diversity is the reason for our incredible strength." [Biden says whites a minority in 2017, Census says 2044, by Paul Bedard, Washington Examiner, June 30, 2015]

Biden has not released a formal immigration policy yet, but recent statements indicate he will be no moderate.

Biden thinks the solution to immigration is U.S. taxpayer-funded aid to Central America. “Unless we address the root causes driving migration from this region, any solutions focused solely on border protection and immigration enforcement will be insufficient,” he wrote last summer [The border won’t be secure until Central America is, by Joseph Biden, The Washington Post, June 25, 2018]

The former vice president said last September that immigration is America’s defining characteristic. “The reason why we’re the country we are is because of immigration,” he said at an Irish heritage event. He added that all immigrants express an “enormous sense of drive, enormous sense of purpose” [Joe Biden says immigration key in emergence of modern US, Suzanne Lynch, Irish Times, September 18, 2018]

We can expect Biden to  amp up the Leftist immigration rhetoric as he campaigns. It’s likely he’ll express support for Amnesty, demand an end to serious immigration enforcement, and claim the real border problem lies in our attempt to secure it. If he’s now willing to put an end to “white man’s culture,” one can only imagine what he will propose on immigration. [Biden criticizes 'white man's culture' as he talks violence against women, by Arlette Saenz, CNN, March 27, 2019]

There are some Democratic candidates who have been more reasonable on immigration. Bernie Sanders once said Open Borders was a “Koch brothers proposal” and voted against the 2006 Amnesty--the same bill Biden voted for. Sanders has cucked on the issue since then, but the democratic socialist still thinks open borders is a ridiculous idea and that America can’t take in the entire world.

Sen. Bernie Sanders campaigns in Oskaloosa, IA: "If you open the borders, there's a lot of poverty in this world, and you're going to have people from all over the world. And I don't think that's something that we can do at this point. Can't do it." pic.twitter.com/INF9GopzIe

Kirsten Gillibrand ran as immigration hawk in her congressional campaigns and supported making English the official language--an idea Biden voted against. But unlike Bernie, Gillibrand no longer shows any sense on immigration. Andrew Yang has advocated for a strong border and believes securing the border must come before any legislation on illegal immigrants.

So, oddly enough, the radical socialist Sanders is more moderate on immigration than the Establishmentarian Biden.  Even so, while Biden may seem weak on immigration by any rational standard, it may not be enough. Some Leftists (like the ones at Jacobin, above) think his support of Obama’s (much exaggerated) deportation policies and belief in border security may be too much for their tastes.

If that proves damning in the 2020 primary, the Democrats will have shown they’ve gone completely mad.