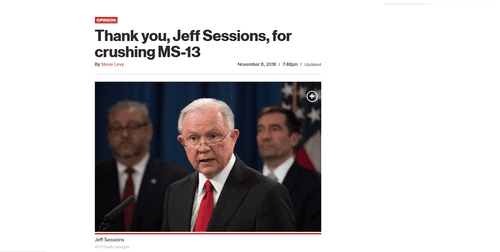 So farewell then, Jeff Sessions. President Trump fired his Attorney General on Wednesday, to the surprise of nobody at all.

We've kicked the Jeff Sessions issue around here at VDARE.com, with myself and Lady Ann broadly pro-Jeff and our border law-enforcement expert Federale quite firmly anti-Jeff.

The gravamen of Federale's case is that Jeff failed to take on the Deep State operatives in the Justice Department, and failed to confront the domestic terrorism of groups like Antifa and Black Lives Matter.

Okay, but with what was available to him—I mean, with no support for changes to the law from a timid and corrupt Republican Congress, and operating under a President who was not merely unsupportive but fiercely hostile, Jeff Sessions at least did things—things that no-one in the administrations of Barack Obama or George W. Bush or Bill Clinton did.

Here's an example from close to home. My actual home is in Suffolk County on Long Island. Suffolk County was for years plagued by Central American gangs, especially MS-13. High-school kids were being murdered. Nothing much got done about it. It didn't help that in 2012 the County Executive declared us a sanctuary county and ceased co-operation with ICE.

I'll let Steve Levy continue the story. Steve served two four-year terms as our County Executive, stepping down at the end of 2011. He was, by the way, a Democrat for those two terms, although he's since changed parties.

Okay, here's Steve Levy picking up the story in an article published in the New York Post November 9th, quote:

Then someone new took occupancy of the White House and tapped Jeff Sessions as AG.

Sessions visited Suffolk County personally and promised a different approach. He channeled massive federal resources to the area and flooded it with FBI agents, tackling the problem primarily as a law enforcement issue. It worked.

Eventually, the county wised up and reversed its horrible decision to not work with the feds. But it was Sessions and his commitment to weed out MS-13 that produced the results.

One gang member after another was brought to justice. The gang has been neutralized and the community has been given back to the people.

There has not been a single murder of a Brentwood or Central Islip student since Sessions took charge.

"Speak as you find" is the rule I was taught for judging people. Here in Suffolk County we've found Jeff Sessions a friend and a vigorous enforcer of the law. Sorry to see you go, Jeff.