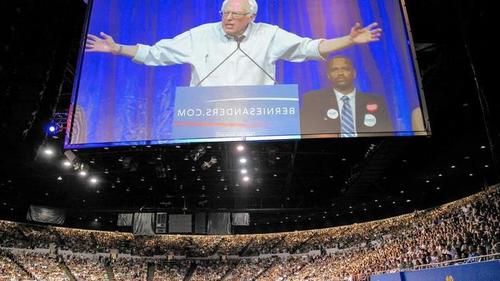 Bernie Sanders, the presidential candidate of white gentry liberals, held a huge rally in Los Angeles last night.  He spoke for an hour.

Along the way Sanders dispelled any illusions we might have had that he is an old-left patriotic defender of American workers, out of tune with new-left identity fads and ethnomasochism.  To the contrary, he is fully on board the Cultural Marxist express.

Sanders, who has been interrupted several times at previous rallies by Black Lives Matter demonstrators calling on him to address police shootings, invited the group to open his rally in Los Angeles. "There is no president that will fight harder to end institutional racism," he told the crowd.

He also gave time to an immigrant rights activist, and pledged to bring the millions of immigrants living in the U.S. illegally "out of the shadows."

"Institutional racism," "out of the shadows," "eleven million," ... Bernie has internalized the whole dreary CultMarx catalog of lies.

He's lost my vote for sure.