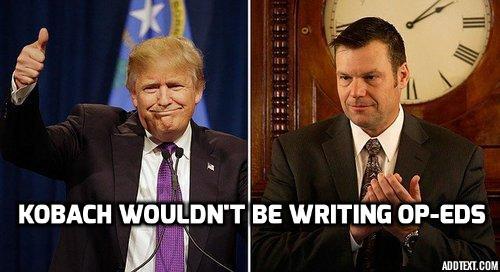 Headliner of the week was the anonymous op-ed published in the New York Anti-White Times on Wednesday by—from the byline—"a senior official in the Trump administration whose identity is known to us and whose job would be jeopardized by its disclosure."

From the tone of the thing, the respectful references to tax cuts and "a more robust military" and total lack of reference to immigration, the author is a Never Trumper, a Jeb Bush-Paul Ryan GOP type. He tells us that

Many of the senior officials in [Trump's] own administration are working diligently from within to frustrate parts of his agenda and his worst inclinations.

There is an underlying systemic problem here.

A new President, coming into office, has to staff up the White House apparatus and the Cabinet departments. That's a lot of personnel slots to fill. Where are you going to find all the people?

The problem is more than usually acute for a new President like Trump, who's an outsider, not a member of the political Establishment.

That's actually putting it mildly: Trump is the outsiderest outsider since Andrew Jackson. In fact he's even more of an outsider than Jackson, who'd served in Congress and been defeated in a previous run for President before his 1828 victory. And the federal government and the White House Establishment were far, far smaller in Jackson's day. Trump, coming in after November 2016, had a colossal staffing problem.

How to solve that problem? My own preferred solution would have been a mass cull of federal office positions, a drastic trimming of the organization chart; if not down to 1828 levels, as close as could be done. Who thinks we need all those Assistant Under Secretaries to the Deputy Undersecretary? Not me.

I realize, however, that that's over-idealistic. More on that in a segment or two. Trump's problem on coming to office was that there weren't enough Trumpists to staff a Trump administration. He had perforce to fall back on holdovers from the next best thing: previous Republican administrations.

So the White House, and the big cabinet Departments, are addled with cucky Jeb Bush / Paul Ryan clones who like missionary wars and who lie awake at night trembling with fear that Rachel Maddow or Al Sharpton may find a reason to call them racist.

The President himself, bless him, seems to have no great enthusiasm for trying to turn Niger into Denmark, and couldn't care less if anyone thinks he's racist.

That's Trump; that's Trumpism; trouble is, there aren't enough Trumpists to staff up the huge, creaking edifice of federal government. So there are Bush-Ryan-Romney types all over, doing their best—as the anonymous New York George Soros Times op-ed writer frankly admitted—to thwart Trump's program. That would be the program 63 million of us voted for in 2016.

Trump himself isn't completely blameless. Yes, Trumpists with enough of a résumé to be useful as staffers were thin on the ground in 2016, but Trump none the less ignored some of those who were available. Could he really not have found a slot for Kris Kobach? For Tom Tancredo? For Pat Buchanan?

And the President himself could be more forceful in resisting these siren voices from the George W. Bush era whispering in his ear.

Trump's instinct is that we need to defend our southern border but we don't need to defend Lithuania's border with Belarus, as we are currently committed to do by the NATO charter. Those "senior officials" that Anonymous is writing about hold the contrary opinions, and Trump has gone along with them; so the southern border is wide open and the Lithuania-Belarus border is under the stern protection of the U.S. military.

Why did he go along with this? He didn't have to. Why didn't he tell the "senior officials" to go boil their heads?

Part of the answer, possibly all of it, can be found in those disastrous televised White House meetings with congresscritters earlier this year, the one on immigration January 9th and the one on gun control February 28th. As I reported after the earlier of those two cuckfests, "If the President's performance on-camera was a sample of his negotiating skills, his next book should be titled The Art of the Kneel."

Allowances should be made, though. At some point in the last few years we—we, the Western world—crossed into new, uncharted political territory. If we haven't found our bearings yet—if even some of those who led us into this new territory are still not totally oriented—it's really not surprising.

So should we anticipate a soft coup? Will the Never Trump cucks wrest back control of the GOP?

I don't think so. They're a nuisance, but they're conducting a rearguard action. As I just said, sometime in the past decade or two we passed from an old politics to a new politics. This is one of those irreversible changes; there's no going back. 木已成舟, as the Chinese say: "The wood has been made into a boat."

The old politics, the politics we had through the middle and later decades of the twentieth century, was a consensus of sorts. There were of course two factions, with different ideas about what the country's priorities should be, but there was consensus on the way things should be done: on how congressional business should be conducted, how the media should cover politics, how we dealt privately with colleagues, neighbors, family members whose views were different from ours. There was even a fair consensus on big geopolitical issues up to the end of the Cold War.

Now it's all changed. Well, not all; these things happen gradually, and this particular thing is not through happening yet. 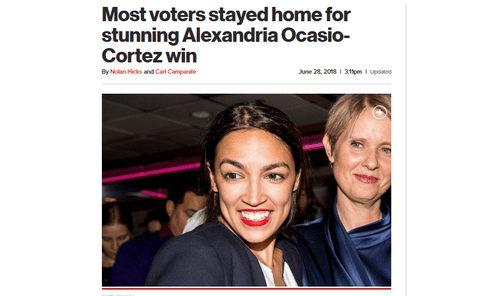 The old politics is still with us, looking a bit dazed and baffled as the new politics rises. I commented a couple of weeks ago, in reference to the New York State gubernatorial race, how old-politics Democrats like Andrew Cuomo feel the ground moving under their feet as they see new-politics Democrats like lesbian socialist Cynthia Nixon and La Raza socialist Alexandria Whats-her-name steal the headlines.

It's the same for old-politics Republicans. They're having trouble getting their bearings in this new political territory. While Nancy Pelosi, Chuck Schumer, and Andrew Cuomo are shaking their heads and frowning at these upstart socialists, Paul Ryan, Lindsey Graham, and Mitt Romney are rolling their eyes and clicking their tongues at the Trumpists.

The symmetry's not perfect. The Alt-Left is culturally way more powerful than the Trumpists. They control the media, the universities, Silicon Valley, and so on. Alt-Left ideas have seeped into the flesh and marrow of the ordinary, not-very-political American public at a scale we Trumpists can only dream of.

Consider for example Mollie Tibbetts, the young Iowa woman murdered by an illegal alien in July. She was a very normal young white Midwesterner, so far as we can judge; yet she thought there was nothing odd about tweeting "I hate white people." Alt-Left is the new normal.

Still, the 2016 election showed us that tens of millions of Republicans, invited to choose between, on the one hand, the full span of conventional GOP orthodoxy as represented by Christie, Huckabee, Santorum, Bush, Rubio, Cruz, Kasich, and Co., and on the other hand, someone else, chose someone else.

It's an interesting question, in fact, which like a good math instructor I shall leave as an exercise for listeners, which is losing market share faster: the old-politics Democrats or the old-politics Republicans.

The other interesting question is whether new-politics Republicans, who we might as well just call Trumpists (although personally I think Donald Trump is only a transitional figure), whether we can recover some of the cultural ground lost to the Alt-Left these past few decades.

It shouldn't be impossible. I hang out with Trumpists—new-politics Republicans—and plenty of them are young and very smart, just the types to lead a march through the institutions like the one the Left pulled off through the later twentieth century—which is why the Trump Administration’s recent sacrificing of Darren Beattie and Ian M.  Smith to JournoFa attacks was such bad news.

It's the same all over. Next to the U.S.A., the country whose politics I should know best is Britain, where I grew up and lived continuously for 26 years, thereafter on and off for an aggregate eight more years. When I read news from the old country, though, I'm lost. Talk about new political territory: I don't know where I am at all.

The way it used to be, the Tory Party was the party of toffs. If you were a toff yourself, or were a non-toff but thought toffs were the right people to have in charge, you voted Tory. If you didn't like toffs, or if you didn't mind them but thought non-toffs should get a shot at running things, you voted Labour.

Outside those odd corners, though, people know it's all changed. Brits know, for example, that the BBC, which in my childhood was the cultural epitome of toff-ness (toffitude, whatever) is now staffed wall-to-wall by Cultural Marxists, who vote Labour only when no Communist Party candidate is on the ticket.

Similarly in the States here. You have to be pretty detached from reality not to notice that the movie stars, Silicon Valley moguls, and corporate HR departments are all Alt-Left. Even billionaires who are not socialists promote issues that we Trumpists oppose. Poster boys here are the Koch Brothers, who are under steady fire from both old-politics Democrats, for being plutocrats who grind the faces of the poor, and new-politics Republicans, for favoring open borders.

Whatever the answers to those questions, the change has come upon us. It’s Anglosphere-wide and it's permanent. "The wood has been made into a boat."

At this point I may as well go full Boomer and bring in Bobby Dylan. Sing it, Bob.