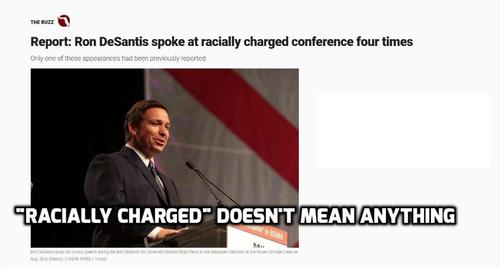 Unless The GOP Learns To Handle Anti-White Race-Baiting Attacks, It’s Done—And So Is The Historic American Nation

The “Restoration Weekend,” of course, is no fringe event, having hosted such eminently mainstream Republican politicians as Newt Gingrich, Mike Huckabee, and Rick Perry over the years. Nonetheless, the Main Stream Media has made an astonishing escalation against the conference, with the local Miami Herald printing an article baldly describing it as an “Alt-Right” event [Florida GOP candidate for governor Ron DeSantis spoke at alt-right events, by Beth Reinhard and Emma Brown, September 10, 2018] (something which must threaten David Horowitz with a heart attack).

Horowitz does seem to be a particular target of Leftist vitriol lately, as he, along with Robert Spencer, were both recently cut off from using credit card companies to raise funds, though the companies later backed off. Steve Bannon was also recently disinvited from an event hosted by The New Yorker after a massive campaign mobilized against giving him a platform. Thus, even groups or individuals who specifically denounce racial supremacism and/or organizing on racial grounds are not protected from digital deplatforming or being casually labeled as “white supremacist” by mainstream publications.

Elizabeth Fusick, a spokesperson for DeSantis, dismissed the attacks only because they represented what she called a “’six degrees of Kevin Bacon’ notion that he is responsible for the views and speeches of others”. [Ron DeSantis spoke at racially charged David Horowitz events, by Beth Reinhard and Emma Brown, Orlando Sentinel, September 10, 2018]

But, of course, this is an implicitly apologetic defense. It only encourages JournoFa enforcers to find more connections to “racists.” DeSantis’ Fusick should directly have said 1) that Horowitz is a hero of the American Conservative Movement, 2) that under the First Amendment he is allowed to have Politically Incorrect opinions, and that 3) he is completely correct that current immigration policy is a disaster.[See Prosecute the Sanctuary Secessionists, March 20, 2017 ]

DeSantis himself was accused of racism when he used the phrase “monkey this up” to describe his opponent’s economic policies. Gillum accused DeSantis of “taking a page directly from the campaign manual of Donald Trump” and using “bullhorns” instead of “dog whistles” when it comes to racial issues. [The Florida Governor’s Race Is Suddenly About Race, by Bob Moser, Rolling Stone, September 4, 2018]

Of course, the MSM aircover provided to Gillum helps him to avoid having to explain why he’s under an FBI investigation for corruption [FBI investigation looms over Democratic nominee for Florida governor, by Dan Merica, CNN, September 3, 2018].

But DeSantis’ response (or that of his consultants) was to try desperately to reorient the race to the economy in the hope that this will win over Latinos, even though there’s little evidence that a non-populist economic appeal to them will be effective [In Florida, DeSantis Hopes to Woo Latinos—Not Just Cubans—by Denouncing ‘Socialism,’ by Patricia Mazzei, New York Times, September 10, 2018].

Not surprisingly, according to a recent poll, Gillum has a small lead despite his far-Left economic views [Poll: Gillum leads DeSantis by 3 points in Florida governor race, by Michael Burke, The Hill, September 4, 2018].

And these kinds of anti-white race-baiting attacks are tripping up Republicans nationwide. For example, Oregon House Rep. Mike Nearman is under attack for serving as vice-president of Oregonians for Immigration Reform, with The Corvallis Advocate doing the usual trick of reprinting SPLC press releases to caterwaul about “hate” [Benton State Rep Tied To Hate Group, by Jay Sharpe, September 5, 2018]. Once again, rather than forthrightly defending the group, Rep. Nearman quibbled about the details of his position, thus allowing gleeful reporters to catch him in a contradiction [GOP Lawmaker is a leader in hate group that calls immigration ‘assault on our culture,’ by Kelly Weill, Daily Beast, September 11, 2018].

Which is especially remarkable because Oregonians for Immigration Reform has already proven that it is politically effective, gathering more than 110,000 signatures for a referendum to repeal Oregon’s “sanctuary” status for illegals. Previously, it triumphantly passed a 2014 anti-illegal alien driving license referendum, from which (as usual) GOP candidates ran away.

And, alas, the White House itself is also not immune from PC paranoia. Arguably all of this started when the White House terminated Darren J. Beattie for the crime of having once spoken at the H.L. Mencken Club.

This triggered a predictable witch hunt which then led to Larry Kudlow being attacked for having VDARE.com Editor Peter Brimelow over at a birthday party. Connecticut GOP gubernatorial candidate Bob Stefanowski similarly disavowed the crime of being in the same room as Peter Brimelow—not that it seems to be doing him any good in the polls. [Ned Lamont Leads Bob Stefanowski In Quinnipiac Poll Of Governor’s Race, by Matthew Kauffman, Hartford Courant, August 23, 2018]

Similarly, Colorado GOP gubernatorial candidate Walter Stapleton has groveled because his grandfather was in the Second Ku Klux Klan         . But of course all that does is increase JournoFa pressure for him to disavow Tom Tancredo because Tancredo has defended VDARE.com. [Gubernatorial candidate Walker Stapleton Talks About Dark Family Past, by Shaun Boyd, CBS, August 28, 2018]

What Republicans don’t understand: the Left will always move the goalposts to find new definitions of racism and sexism—even if it means probingly ludicrously into family history. That is because they are arguing in bad faith. Thus, if Republicans disavow one person or another, it simply enables the next attack rather than stopping it.

Republicans need to act more like Democrats and stop disavowing their own supporters in a misguided attempt to win Main Stream Media sympathy.

Of course, there is another tactic, which is to avoid all controversial issues. That leaves only the economy. But if the only thing Republicans feel permitted to talk about is the economy, they will never do anything but pass tax cuts and point pitifully about strong growth [Trump has set economic growth on fire. Here is how he did it. By Jeff Cox, CNBC, September 7, 2018].

Yet polls suggest Economic Man does not determine elections. Thus the Democrats are still favored to recapture the House and some are even beginning talking about taking the Senate [Eight weeks out: Dems see narrow path to Senate majority, by Lisa Hagen and Max Greenwood, The Hill, September 11, 2018].

Much of this Democratic enthusiasm derives from the sense of righteous indignation they obtain from driving “racists” out of public life—a campaign GOP cowardice is enabling.

If the GOP wanted to fight back, it could do something—anything!—about immigration, Affirmative Action, flag burning, digital deplatforming, and other issues that would energize the base and help crack the Democrat coalition.

But instead of using an issue that can turn out white voters, the GOP has busied itself with yet another push for unpopular tax cuts [House Republicans unveil plan to make individuals’ tax cuts permanent, by Siobhan Hughes and Anne Tergesen, The Wall Street Journal, September 10, 2018]

I voted for a Muslim ban and a wall and all I got was this lousy tax cut.

Like immigration, race is not an issue that Republicans can “get past.” It will always be with us. Slow motion retreat is not a sustainable strategy. It won’t work to win elections in the short or long-term.

If Republicans want to be taken seriously a political organization, they need to learn to “wheel and fight” on issues or race and immigration.

If they don’t, they will lose their majority and their long-term electoral viability—and the rest of us will lose our country.