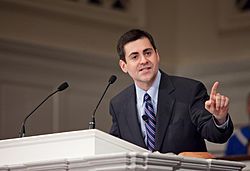 Russell Moore’s official title is President of the Ethics and Religious Liberty Commission of the Southern Baptist Convention, but he seems to view himself as the Pope and Grand Inquisitor of all Evangelicals. Moore has been campaigning against the heresy of Trumpism for some time, claiming in the New York Times back in September that “to back Mr. Trump, these [evangelical] voters must repudiate everything they believe.” As an evangelical Christian myself, and a local church deacon, I strongly disagree. I believe Moore’s attitude is arrogant, hypocritical—and, ultimately, blasphemous.

Moore just hurled another NYT anathema against Trump’s evangelical supporters [A White Church No More, May 6, 2016]. It got him on “Face the Nation” (May 8), where he said evangelicals shouldn’t vote for Trump or Hillary. (So….?) The next day Donald Trump tweeted that “Russell Moore is truly a terrible representative of Evangelicals and all of the good they stand for. A nasty guy with no heart!” 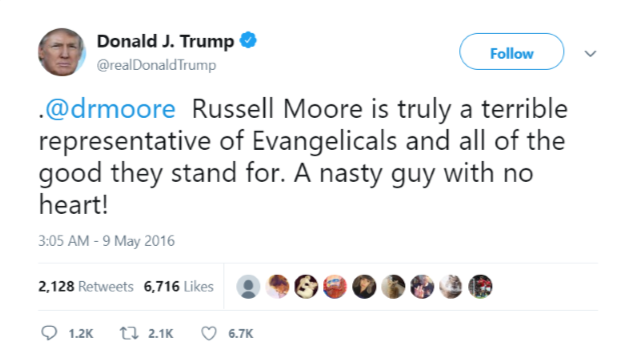 Moore’s NYT article is a real piece of work: mean-spirited, incoherent, full of double standards, haughty and self-righteous, and anti-white. It’s not very heavy on Scripture and Christian doctrine, but it is heavy on the condemnation of white evangelicals, who he orders to celebrate their demographic dispossession as a Christian virtue or be condemned.

Note too where it’s published – The New York Times. I don’t see Russell Moore publishing New York Times op-eds defending traditional Christian morality. For example, a more recent (and OK) Moore article, What the Transgender Bathroom Debate Means For You, is published only on his own website. That might upset his MSM buddies.

Moore begins with an anecdote about “a Southern Baptist church in suburban Birmingham” which he claims (it might be helpful to hear their side of the story) failed to condemn violence against blacks in the Civil Rights era, Later the neighborhood changed from white to black, the church couldn’t get black people to join it, and dwindled away.

After thus wrapping himself in the mantle of the Civil Rights movement, Moore pontificates that Trump’s “campaign is forcing American Christians to grapple with some scary realities that will have implications for years to come.”

Let’s take it point by point:

Moore is short on concrete examples. But knowing he is an Amnesty fanatic, I would guess that simply being against Amnesty would be “nativism and bigotry.”

Of course, here Moore is sending some “not-so-coded messages” himself. His linking “African-Americans and immigrants” is intentional. Though the two groups are totally different, he tries to use the historical sympathy relating to the former to condemn those who question the current status of the latter.

I don’t really see how “basic religious freedoms” of U.S. citizen Muslims are being questioned. If he’s talking about non-citizen prospective immigrants, Americans have every right to allow or deny entrance to any foreigner on any grounds whatsoever.

Well, I’d have to see Moore’s examples of “threats and intimidation”— nowadays just disagreeing with somebody can land you in trouble. But has Moore condemned threats and actual violence against Trump supporters—in Chicago, California, etc.? Would his New York Times buddies let him?

Moore also brings up the tweeting of “racially charged comments” of “a major presidential candidate”, though he didn’t include the comments he was referring to. (See why VDARE.COM’s hyperlinks are so useful?

Then Moore gets to the real heart of the article, self-righteous gloating over America’s demographic transformation as reflected in the church:

That is indeed a basic definition of evangelicalism, but it would be valid in any culture. Why bring race and ethnicity into it?

Well, because for Moore, that’s the important thing. He goes on at length explaining that there are many non-white, non-Anglo evangelicals, which is of course true, but irrelevant:

I don’t know any white evangelicals who think  Jesus only works with “white, suburban” churches. In fact, white evangelical churches tend to be very involved with cross-cultural church work, and generous in their giving to charity and mission work. I know that my local congregation is.

But that’s not enough for Russell Moore. Demographic transformation in both the society at large and the church must be celebrated as a Christian virtue.

Moore takes it even further, presuming to speak for God in condemning white American Christians who don’t support his political agenda of multiculturalism and demographic transformation:

So Moore is calling on evangelicals to accept a political agenda of support for Amnesty, mass migration and the demographic transformation of the United States. Where is that in the Bible?

Will Moore tell Hispanic activists to identify as Christians first, and not as La Raza activists first?

Why is the “Christians first”  advice only applied to traditional white conservative Christians?

Then Moore cites the Bible:

That’s from Galatians 6:2. In context, it has nothing to do with government-imposed multiculturalism. But Russell lays it on ole Whitey some more:

By “nostalgia” I assume Moore is referring to positive memories about how America used to be. Moore wants you to feel guilty about that.

And he slams on “Mayberry” as a symbol of a quiet, peaceful Southern town. That’s something else to feel guilty about too.

(Russell Moore is a Southerner himself. I’ve noticed that when Southerners go PC, they really go PC. It’s as if they think they have something to prove.)

Moore closes out with this atrocious logic:

Just take that, you white Christian Trump-supporter. Moore wants you to believe that a “dark-skinned” Jesus is going to punish you for voting for Trump.

Bunk. In the first place, for what it’s worth, Moore can’t even prove that Jesus Christ was “dark-skinned”. The New Testament never describes his complexion. Middle Eastern peoples show a wide variety of skin complexions, some are no darker than a typical white European. So Moore shouldn’t get dogmatic about it.

But here’s what’s really offensive from a Christian point of view: Moore is saying that, on Judgment Day, Jesus Christ is going to condemn white Christians who voted for Trump back in 2016. And why? Because, Moore tells us, Jesus is “dark-skinned”.

Christianity teaches that Jesus Christ is God in the flesh, the Savior of mankind, the Second Person of the Trinity.

But for Moore, Jesus is reduced to a racial activist who judges us on a 21st-century Cultural Marxist political agenda

Sorry Brother Russell, but that idea is just blasphemous.

Despite his talk about being a “Christian First”, Moore has no problem being part of an organization, the so-called Evangelical Immigration Table, receiving money from global atheist (and light-skinned Jew) George Soros—part of a AstroTurf group VDARE.com calls “Soros Evangelicals.”

When Moore gloats over “White Church No More,” he’s really gloating over the end of the historic American nation. That’s a political agenda not a Christian agenda – and it’s not part of the gospel.