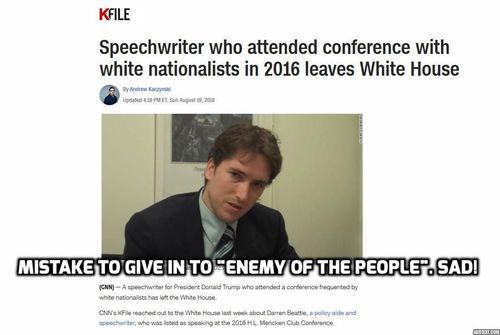 See, earlier Brimelow At Mencken: The “American Conservative Movement” Has Ended. The American Right Goes On.

It’s the best of times and the worst of times for supporters of President Donald Trump concerned about free speech. President Trump recently blasted the conduct of social networking companies that censor conservative-leaning views based on subjective standards, correctly labeling it “very dangerous” [Trump says it’s ‘very dangerous’ when Twitter, Facebook self-regulate content, by Sara Salinas, CNBC, August 20, 2018]. At the same time, the shameful decision by the Trump Administration to terminate speechwriter Darren Beattie , just for speaking at a conference at which VDARE.com Editor Peter Brimelow also spoke, shows the president still doesn’t understand the nature of his political opposition. Beattie was fired not because of anything he did, or even because of anything he said, but because of sensationalism by a deeply dishonest media. Needless to say, President Trump’s own supporters have stood by him even after President Trump actually said things that are far more controversial. If President Trump does not begin returning such loyalty, he will find himself politically isolated—and powerless to resist the drive for impeachment being agitated for by the Main Stream Media.

Beattie was fired because he spoke at the H.L Mencken Club in 2016. For those reading this waiting for the punchline, you’ve already heard it—that’s it. That was all he did. Andrew Kaczynski of CNN breathlessly reported this as “having attended a conference frequented by white nationalists” [Speechwriter who attended conference with white nationalists in 2016 leaves White House, August 19, 2018] This is an example of what can be termed a wrist-flapping piece, in which a journalist points-and-sputters at people he doesn’t like. It’s an attempt by journalists to dictate what people are and are not allowed to say, read, and do. And such a tactic only has power if people succumb to it.

The Trump White House just did succumb. Needless to say, this won’t end the “controversy”—it will simply mean that the hunt will continue for more people who can be forced out, culminating in the POTUS himself.

Thus, the Washington Post’s Robert Costa cheerleads Beattie’s firing and links it to his own article in which he quotes various Republicans accusing the president himself of racial insensitivity.

The exit of a WH speechwriter linked to a white nationalist event comes as the GOP is all but silent on race. https://t.co/zQvwECVCnm

In this case, Costa accuses Trump of having made a “racially charged insult” by calling Omarosa Manigault a “dog.” Costa almost certainly knows that he is lying, as this is a term Trump has used against all his enemies for years and is as characteristic of his speech as the word “huge” [Nolte: Nine times ‘racist-sexist’ Trump described white men as ‘dogs,’ by John Nolte, Breitbart, August 15, 2018]. George Wallace, the Southern Strategy, and Ronald Reagan’s references to states’ rights are also ritually invoked in Costa’s article [“I’m not going there”: As Trump hurls racial invective, most Republicans stay silent, by Ashley Parker, Seung Min Kim and Robert Costa, Washington Post, August 18, 2018]. Of course, such an expansive approach shows that any attempt by Republicans to “prove” they are not racist is doomed to fail. After all, the preferred Never Trumper self-description of “classical liberal” was just described by the Huffington Post as simply “fancy racism” [For fancy racists, classical liberalism offers respect, intrigue, by Zach Carter, August 19, 2018].

During the 2016 election, journalists looked on in baffled fury as President Trump easily moved on from one “disqualifying” pronouncement to another—from his first speech about illegal alien criminals to his proposed travel ban. However, President Trump’s victory did not inaugurate a new era of Political Incorrectness, but the imposition of a more virulent orthodoxy. Since journalists failed to take President Trump down, they have increasingly turned on random, hapless people, destroying lives and careers by widely promoting relatively trivial incidents and turning them into national controversies.

This is also why it is literally true to describe journalists as the “enemy of the people.”

In the latest episode of "Not An Enemy Of The People," a news anchor uses her verified Twitter account to try to start a dox/harassment campaign against a private citizen over some petty interpersonal dispute she only provides her version of. pic.twitter.com/uuLzjEYGNo

An individual citizen has several forms of redress against government officials or law enforcement if he is targeted. For all the hysteria about Russian “meddling,” no foreign enemy poses an appreciable threat to individual citizens. However, if a citizen is targeted by the Main Stream Media, he has no real way to fight back against what the late Joe Sobran appropriately termed “The Hive.” Alternative media and the Internet could potentially provide a way for citizens to push back. But journalists have made a priority of shutting down such outreach and funding for political enemies. For example:

In each of these cases, reporters may argue they are simply opposing “hate speech” or “extremism.” Yet this is absurd at a time when the overtly hateful Sarah Jeong is rewarded with a spot on The New York Times editorial board, stripping former Communist supporter John Brennan of his security clearance is treated like a constitutional crisis, and we have the likes of Al Sharpton, Van Jones, and Spike Lee held as moral exemplars. One only has to look at verified accounts at Twitter to see over the top hate speech in terms far more virulent and extreme than anything on supposed “white nationalist” sites.

This is left wing hypocrisy! There is an institutionally supported hatred of white people in the media!https://t.co/8yoko8PEZqhttps://t.co/wzWUSZTkS7https://t.co/5OGwP7qid7 pic.twitter.com/WL02c0q81T

The entire moral crusade by journalists is self-discrediting. It is best understood as a crude exercise of power, not as a display of real ethical concern. Journalists clearly regard themselves as a kind of guild, and are moving to ensure only those within their closed network have access to the financial and communications infrastructure needed to connect with the mass public.

Let it be said plainly—if America were not saddled with today’s “journalists,” we would be better informed, have more freedom of speech, and have a greater potential to mobilize against government abuses. Today’s journalists are simply activists in the service of established power. It is the First Amendment right of such journalists to work on behalf of their policy preferences, but there is no reason for Americans to treat them any different than the shrieking lunatics of the Revolutionary Communist Party or the masked radicals of antifa reporters so often work with [Journofa: Daily Beast “Journalist” Kelly Weill Follows Multiple Antifa Accounts On Twitter, by Hunter Wallace, Occidental Dissent, August 16, 2018]

As Steve Bannon accurately said many months ago, this is the real “opposition party” to President Trump. The Democratic party currently enjoys an almost seven point lead in the generic party ballot [2018 Generic Congressional Vote, RealClearPolitics, August 20, 2018]. Yet the Democrats have no real policy agenda, are deeply internally divided, and are barely keeping the kid on what is likely to be a full-scale intra party civil war along both racial and ideological faultlines [Midterms exposing divide in Democratic Party, FoxNews, August 9, 2018]. President Trump isn’t facing the Democrats so much as he is facing the MSM and its ability to create new Narratives that he needs to respond to every day. His war with the reporters that are quite openly trying to take down his Administration is his most important battle.

In that battle, President Trump keeps being undermined most by the people supposedly on his side. His former African-American aide Omarosa Manigault is telling Al Sharpton that the president wants a “race war” [Omarosa: I believe Trump wants to start a race war, by Brett Samuels, The Hill, August 19, 2018]. His lawyers seem to be working for the enemy. He keeps being betrayed by aides who are more eager to make friends with the press than to do their jobs [The Firings And Fury: The biggest Trump resignations and firings so far, by Sam Morris and Francisco Navas, The Guardian, July 5, 2018]. It’s easy to imagine that he is frustrated and that, as his son Eric fumed, he must “truly hate disloyal people.”

Yet loyalty is a two-way process. President Trump hired many people who opposed him during the primaries and turned his back on many of those who supported him all the way. Now, his administration is firing a loyal soldier at the behest of open enemies.

If Trump wants to complete his term, he needs to give people a reason to stick by him. And if he truly wants to defeat the enemies of the people, even the President of the United States needs to realize he can’t win this battle by himself.