“DIE!”: The Unlimited Radicalism Of Antifa—Enforcer For Democrats (And, Tacitly, Conservatism Inc.) 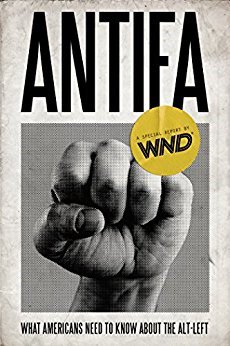 The mind of a rational person rebels at the suggestion of such an unlimited, existential conflict. After all, reasonable people should always be able to come to a compromise, some settlement which will avoid violence and chaos. But there are some people who cannot be reasoned with, whose objectives are so unlimited and irrational that not only compromise, but even co-existence with them, is impossible.

Americans face such an existential threat in the form of the Leftist vigilante group that calls itself "antifa." And now Americans have the first examination of the so-called “anti-fascists” from a patriot perspective in a new book Antifa: What Americans Need To Know About The Alt-Left. (Published by the eccentric but basically orthodox conservative website WND, the book oddly lists no author).

Antifa have been plaguing immigration patriots for many years. But it’s only recently that the average American has become aware of their existence. The attacks on Trump supporters during and after the presidential campaign have made Americans aware of what the president eventually termed the “Alt-Left.”

Of course, most Establishment conservatives were using the term “Alt” as simply a synonym for “bad.” And their typical criticism of the black-clad thugs was that they were “the real fascists.” The huckster Dinesh D’Souza has built an entire career in presenting this alternate history to the gullible and well-meaning [America: Imagine A World Without Her, by Gregory Hood, Counter Currents, July 17, 2017].

Structured as a “Special Report,” Antifa rejects this Conservatism Inc. cliché and provides an accurate history of the rise of fascism as well as anti-fascism. It argues the entire debate about fascism and “anti-fascism” is essentially backwards: Fascism arose as a reaction to the Communist revolution in Russia and the attempted Communist revolutions in Hungary, Slovakia and parts of Germany:

“Without communist revolution and without the vanguard leftist parties that launched those revolutions, there would have been no reason for fascism ever to exit,” the anonymous author writes. “Essentially, the communist revolutionaries and their ‘direct action’ tactics had created their own nemesis capable of defeating them in the streets and willing to compete with them for the loyalty of the workers.

Similarly, instead of arising as a response to fascism, the modern antifa movement was “just a brand for already existing communist and anarchist activists”—yet another “front group” in the long line of “front groups” the Reds have cobbled together throughout their bloody history.

In some ways, the brand hasn’t even developed since the 1930s, as contemporary antifa still use the “flags within flags” and “three arrows” logos first created by the German Communists (KPD) and Socialist (SPD) parties.

“Anti-fascism,” as the author details, has been a remarkably consistent slogan of the Totalitarian Left in all its manifestations. From the Berlin Wall (the “Anti Fascist Protection Rampart”) to the British “Anti Nazi League” (a creation of the Socialist Workers Party), this Left (including left-anarchists such as the “autonomists”) always frames itself as the only defense against “fascism.” Of course, by “fascists,” it means everyone else in the world. 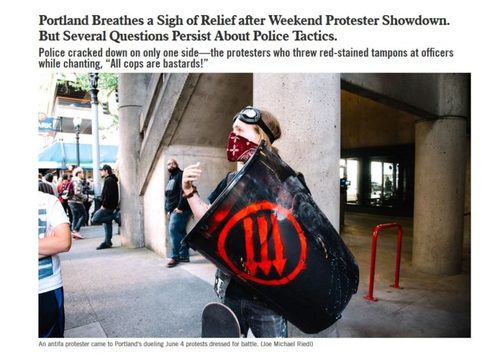 Given current events, it’s worth noting most of Orwell’s Homage To Catalonia is about the vicious infighting between various Spanish leftist factions, all ostensibly at war with Francisco Franco. And as Antifa: What Americans Need To Know About The Alt-Left points out, Spanish Republican heroine Dolores Ibárruri, who famously utilized the antifa No Pasarán! (“They shall not pass”) slogan during the Battle for Madrid, was a Stalinist who thoroughly approved of the bloody purges against Trotskyists and anarchists because she claimed they were “fascists.”

Indeed, Antifa: What Americans Need To Know About The Alt-Left is a critical warning to every American, not just conservatives, that they are all being targeted by antifa. Just as every Communist regime has always violently targeted “wreckers” to explain policy failures, so must antifa target an ever increasing number of “fascists” as the impossible (and undesirable) goal of “equality” remains forever over the horizon.

No one can even define “racism” anymore; being “colorblind” has gone from the definition of anti-racism to proof of white supremacy within only a few years. [Colorblindness: the New Racism? By Afi-Odelia E. Scruggs, Teaching Tolerance, Fall 2009]

[T]he process of continuous social revolution has no limits. Average citizens may say they are opposed to “racism” but… that word is being continuously redefined so that almost everyone who is not actually Antifa is a “racist,” and therefore a target. Words such as “ableism,” “heteronormativity,” or “transphobia” would have drawn confused stares from the vast majority of the population even a few years ago. Today, they are seen as grounds to get someone fired from his or her job or attack him or her in the street.

As “Anti-fascism” quite explicitly defines itself as anti-liberal (in the classical sense of liberalism), it repudiates the right to free speech and takes upon itself the responsibility to enforce through violence a remarkably narrow definition of what people can and cannot say, it is of course quintessentially totalitarian. And, not surprisingly, it is Main Stream Media journalists, who themselves now operate almost entirely as commissars, who enable these terrorists by consistently providing them adoring coverage and spearheading their attack campaigns. Indeed, reporters keep running interference for Antifa even as Antifa itself keeps physically attacking them [Physical assault on journalists’ rap sheet reveal Antifa 10 – Trump Supporters 0, by John Nolte, Breitbart, August 31, 2017].

Of course, many “conservatives” don’t particularly want to hear this either. After all, Conservatism Inc. has a long history of tacitly working with Antifa to police “the movement.”  Thus National Review was silent when antifa began closing down American Renaissance conferences, even suppressing a diary item by John Derbyshire—because American Renaissance had made devastating criticisms of National Review’s cuckservatism and its betrayal of immigration patriotism that the NR girlyboys could not answer, especially while pursuing their real careers as MSM token rightists.

And the Beltway Right is hardly interested in a serious discussion of political history anyway. It’s quite content to voice platitudes about Progressives of being “the real fascists.”

But Antifa demonstrates that “anti-fascism” is not merely Left Totalitarianism, but now deeply anti-white. All efforts by well-meaning grassroots conservatives to try to prove they are not “fascist” or “racist” are doomed to failure: “By definition, Antifa must have enemies that can be dehumanized as evil and dangerous; otherwise they lose their entire reason for existence.”

Indeed, many European-Americans are starting to understand the demands for “equality” were never about equality. The goalposts will always be moved; the demands for more concessions and redistribution of wealth always increased. No matter how much conservatives (and whites in general) give, the Establishment Left, following in the train of its antifa vanguard, will always demand more.

Immigration patriots also should pay careful attention to Antifa. Many grassroots Americans continue to show a baffling naivete when it comes to the immigration debate. It’s not uncommon to hear conservatives, or even Trump supporters, say they want to “be fair” to DACA recipients or welcome legal, as opposed to illegal, immigrants. But claims that illegals are “new Americans” are just as dishonest as claims that antifa are simply “opposed to fascism.” In both cases, friendly-sounding propaganda is used to conceal a far more radical agenda.

In his weird way, and perhaps despite himself, Donald Trump has forced many Republicans into recognizing the antifa threat at last. Antifa: What Americans Need To Know About The Alt-Left is an indication that mainstream conservatives are finally waking up to the terrifying reality of the American Left’s paramilitaries.

And perhaps it is a sign average Americans will no longer allow their declared enemies to tell them what they are allowed to think, say, and hear.