OBSCENITY WARNING: Extensive use of profanity in the quoted BLM tweets.

The day after a racist monster shot 12 white policemen in Dallas, murdering five of them, in the worst mass shooting of policemen in history, Hillary Clinton went on Wolf Blitzer's show and blamed the cops.

Asked what she would do to stop police from being targeted for murder, she said: "Remember that, just 24 hours before, we had a killing, with the loss of life in Baton Rouge, in Minneapolis." As president, she said, she would "have national guidelines about the use of force by police, especially deadly force."

She couldn't take ONE DAY to talk about the cops who were murdered in Dallas?

The nicest thing Hillary could think to say about the dead cops was that they were shot while performing their most sacred duty: protecting Black Lives Matter protesters hurling abuse at them. "Those police officers were protecting a peaceful protest, a protest of authority, that is a hallmark of America."

No matter how Wolf Blitzer framed the question about the cold-blooded murder of five cops, Hillary would not stop lecturing the police for their lack of sensitivity. "It's going to take a lot of training on the part of our police officers to get back into the communities, to understand what's happening in neighborhoods."

There's a big audience for Hillary's blame-the-victim approach. Even as the Dallas massacre was happening, and for the next 24 hours, Twitter was ablaze with tweets congratulating the mass murderer for killing "pigs": 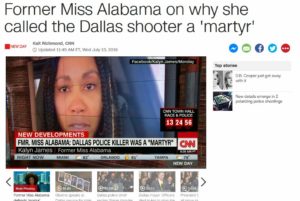 white cops gunned down in Dallas, and expressed admiration for their murderer, saying, "A lot of us feel the same way."

On CNN, Don Lemon (right) responded to the murder of five cops by complaining that he has to call cops "sir" in order "to stay alive." He then repeated the insane liberal fantasy about how unfailingly polite

black people are to the cops, compared to the abuse heaped on them by white people. "My white counterparts," Lemon said, "speak to police officers in a way that I would never in a million years do, and that is the reality of it."

Pro Tip: To avoid being arrested or shot by the police, do not violently attack them, scream expletives at them, throw bottles and rocks at them, or try to grab their guns.

The media love to point out that one out of four civilians shot by the police are black— in combination with the gigantically irrelevant fact that blacks are only 13 percent of the population. They're hoping no one will mention the awkward fact that blacks punch way above their weight in the percentage of crime they commit.

There is not a crime that blacks do not commit at rates higher than whites, Hispanics and Asians, except probably failing to properly extinguish a campfire in a national forest.

Given these crime rates, the fact that only 26 percent of civilians killed by police are black is astonishing.

In addition to not understanding basic statistical facts, the Black Lives Matter people are crazy. They're avowedly anti-police, marching through the streets shouting, "What do we want?" "DEAD COPS!" “When do we want it?" "NOW! 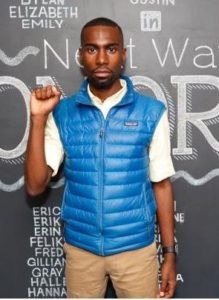 There's very little reason to imagine that most black people think any better of them than the rest of us do. BLM is attractive to college students because it's not the Black Panthers. BLM is a gay group. It was started by two lesbians and its most prominent spokesman is a gay man.

The BLM activists may gin up violent Panther types to go out and kill police, but there are no "Black Panther" groups on college campuses, whereas nearly every college has a BLM chapter.

BLM is never going to win the hearts of black America. It's just a vehicle for middle-class, mostly mixed-race college kids to act out because they're at colleges they never should have been admitted to, or because of their rejection by the black community for being gay. (Former BLM activist Shaun King was exposed as full white, pulling a Rachel Dolezal, by pretending to be black, even winning an Oprah scholarship to a historically black college.)

What we've learned from the Dallas police shooting is that Clinton is betting Republicans are too sissified to challenge her on her support for BLM. If Trump has the balls to denounce BLM and demand that Hillary disavow her support of these eunuch cop-killer enablers, he won't lose a single black vote.