On Saturday, supporters of the president gathered around the country in the Spirit of America pro-Trump demonstrations. In most places, things went off well, but not in Berkeley, where violence reigned as police stood by and watched.

A number of the pro-Trump people were beyond middle age but they were attacked nevertheless by the young anarchists.

An elderly man wearing a MAGA hat was pepper-sprayed by an antifa type. 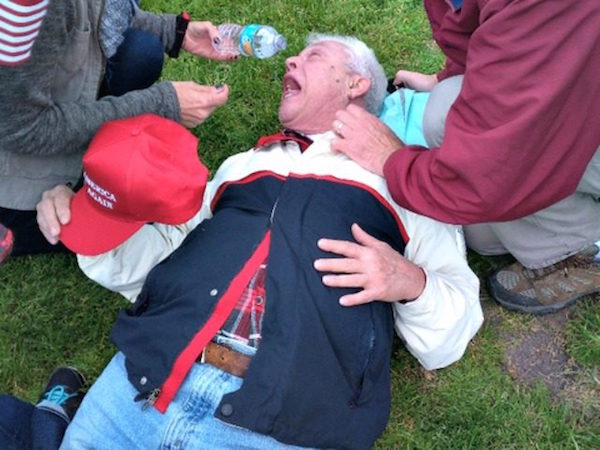 Below, Trump supporter Tom Condon becomes entangled in the center of a fight after attempting to push anti-Trump protesters back with his cane. 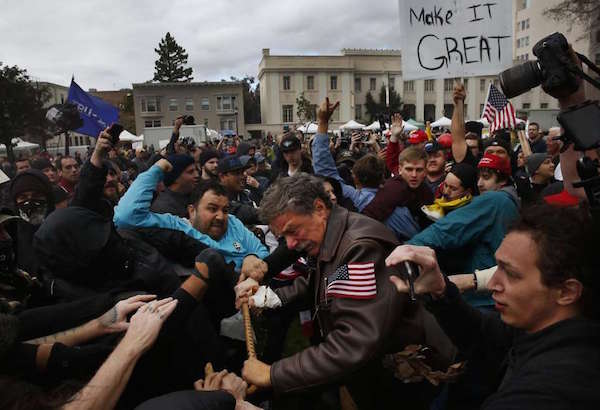 Below is a news story from the CBS station in San Francisco across the bay from Berkeley. Of particular interest was the passive attitude of the police as observed by the reporter on scene. Usually officers organize the situation so that opposing groups don’t have the opportunity to beat on each other, but the police just let the anarchy and violence happen. Does the city government want conservatives to stay out of Berkeley? Probably. Eventually the police got around to arresting 10 of the thugs.

For the most part, officers have kept back and gave a hands-off approach.

ANCHOR: We’ve seen that stance before from officers. They also didn’t move in during those violent Cal protests. So what are they saying about not moving in?

REPORTER: They’re not giving us an answer, but they’re just kind of staying at the edge of the park. We’re thinking maybe they’re concerned about their own safety, maybe they don’t want to instigate or cause the crowd to get even more violent. They’re just watching the fights happening, and a lot of folks are upset, pretty frustrated, that they weren’t moving in to try to break up the fights, exactly why, is that their strategy? We’re not exactly sure, they haven’t said much to the media.

It’s likely the Berkeley officers were merely following orders from above, just as they were during the February 1 scheduled appearance of Milo Yiannopoulos when a phalanx of masked anarchists in black marched onto the UC campus to riot and destroy property. The police were then under a “no arrest” directive, and as a result $100,000 damage was incurred. Breitbart.com explained a few days later that the city preferred property damage to lawsuits, but a larger effect of the weak policy is to create a mega-magnet for anarchists to come and create havoc: nobody will be arrested even for massive destruction.

There will probably be a public outcry against failure of the city to maintain public safety, but an effective response may not be forthcoming. Berkeley is incredibly stuck on its own special identity of hip chaos and is unlikely to accept the American value of law and order.