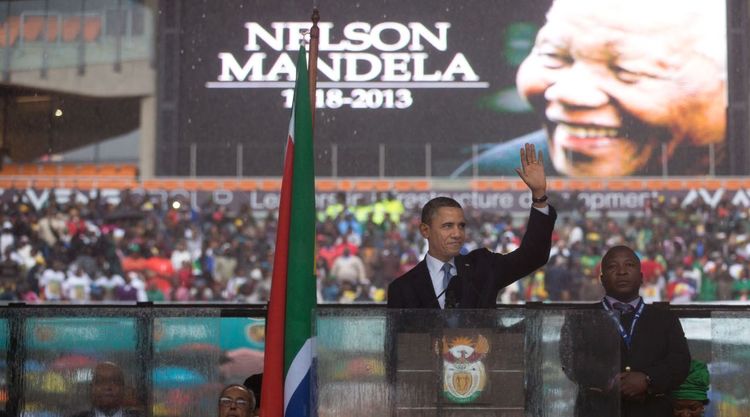 Mandela, Churchill and the War for the Future

By their heroes shall you know them.

In his eulogy, President Obama put Nelson Mandela in the company of three other heroes: Mahatma Gandhi, Martin Luther King, and Abraham Lincoln.

What did these men have in common? Three were assassinated, and all four are icons of resistance to white rule over peoples of color.

Lincoln waged the bloodiest war in American history that ended slavery. Gandhi advanced the end of British rule in India. King led the civil rights struggle that buried Jim Crow. Mandela was the leader of the revolution that overthrew apartheid.

Obama's heroes testify to his belief that the great moral struggle of the age is the struggle for racial equality.

For the neocons, the greatest man was Winston Churchill, because he stood up, almost alone, to the great evil of the age—Nazism.

Thus, to neocons, Munich was the great betrayal because it was there that Neville Chamberlain, rather than defy Hitler, agreed to the return of the Sudeten Germans to German rule. (To the Old Right, Yalta, where Churchill and FDR ceded Eastern Europe to Stalin, a monster as evil and more menacing than Hitler, was the greatest betrayal.)

But what did Churchill think of Obama's hero Gandhi?

"It is alarming and nauseating to see Mr. Gandhi, a seditious Middle Temple lawyer, now posing as a fakir of a type well known in the east, striding half naked up the steps of the Viceregal Palace ... to parlay on equal terms with the representative of the Emperor-King."

What did Churchill think of ending Western white rule of peoples of color? Here he is in 1937:

"I do not admit ... that a great wrong has been done to the Red Indians of America or the black people of Australia ... by the fact that a stronger race, a higher grade race ... has come in and taken its place."

"I have not become the King's first minister in order to preside over the liquidation of the British Empire."

In short, Dunkirk defiance aside, Churchill's convictions about the superiority of some races and civilizations, and their inherent right to rule what Kipling called "the lesser breeds without the law," was and is the antithesis of what Obama believes.

Any wonder Obama shipped that bust of Churchill that "W" kept in the Oval Office back to the British embassy. Any surprise Obama failed to show up at the funeral of Margaret Thatcher, a Churchillian who sent the fleet to retake the Falkland Islands from Argentina.

The point: Obama's vision of an ideal world and Churchill's are irreconcilable.

Second, not only is Churchill dead, his empire is dead, his world is dead, and his ideas on superior races and civilizations would be censured and censored if spoken in any international forum.

We are in Obama's world now. It is a world where not only are all races, religions and civilizations equal, but within nations the greater the diversity of races, religions, cultures and ethnic groups the better.

And not only should all have equal rights, but more equal rewards.

But though Obama's world is today, it is looking less like tomorrow.

Across the Middle East and Africa, Islamists are murdering and persecuting Christians as they do not regard Christianity as equal.

Ethnonationalism unites Chinese against Tibetans and Uighurs and propels a confrontation with the Japanese who have never been forgiven for the Rape of Nanking.

Vladimir Putin is in the crosshairs of Western secularists for seeking to revive and restore Orthodox Christianity and its moral precepts to primacy in Russian law, which likely means no Gay Pride parades in Red Square any time soon.

In a Christmas card to this writer, the Washington Post's Harold Meyerson brings up my late father's support of Spain's Gen. Francisco Franco—to reveal the son's suspect motives.

In a civil war from 1936-1939, Franco ran off a Christophobic regime of Socialists, Stalinists and Trotskyists as their comrades of the Abraham Lincoln Battalion got waxed at Jarama River and ended up on the Attorney General's List of Subversive Organizations.

Sorry about that, Harold.

Across Europe, globalism and transnationalism, as represented by the eurozone and EU, seem in retreat, as nationalism is resurgent. Now it is the UKIP, a new British independence party, which seeks to secede from the EU that is surging—at the expense of the Tories.

Let France be France! Let Britain be Britain! Let Scotland be Scotland! These are the cries coming from the hearts of Europeans rejecting mass immigration and the cacophonous madness of multiculturalism.

All men may be equal in rights. But most prefer their own faith, country, culture, civilization, and kind. They cherish and wish to maintain their own unique and separate identities. They do not want to disappear into some great amalgam of the New World Order.

Whether globalism or nationalism prevails, the big battle is coming.