The rule of law has been abolished in Baltimore, as Baltimore State’s Attorney Marilyn Mosby (right) announced six police officers would be charged because, in her words, “I heard your calls for ‘no justice, no peace.” And now that a rioters’ veto has apparently become a recognized legal principle, Establishment Democrats are rushing to embrace it, even Hillary Clinton. This puts them on a collision course with the reality of wildly disproportionate black crime—which they cannot admit, or let America acknowledge.

Hillary Clinton is now calling for body cameras for every police department in the country and an end to the “era of mass incarceration.” Of course, this constitutes a reversal of the policies of her husband, former President Bill Clinton. 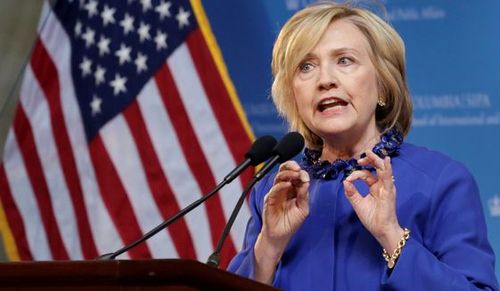 Bill Clinton is in many ways responsible for the dramatic increase in incarceration rates, notably with his support of mandatory sentencing laws and grants designed to put more cops on the streets [Hillary Clinton calls for end to mass incarceration, reversing Bill Clinton legacy, by Jonathan Allen, Vox, April 29, 2015].

And it’s not just Clinton who has to explain away prior Democratic policies. The biggest political victim of the Baltimore riots is undoubtedly former Mayor Martin O’Malley, who largely built his reputation as an effective leader by implementing the very tough on crime measures that are now under attack. O’Malley was even heckled when he returned to the city after the riots “just to be present” [O’Malley 2016 Just Committed Suicide in Baltimore, by Jackie Kucinich, The Daily Beast, April 30, 2015].

O’Malley is trying to pin the blame on Republicans and is calling for more aid to American cities, but it’s unclear how he can credibly position himself as the economic populist in the Democratic Party now that Vermont Senator (and socialist) Bernie Sanders has entered the race [Martin O’Malley defends his Baltimore record, calls for ‘agenda for American cities,’ by Michael Memoli, Los Angeles Times, May 3, 2015].

As for Sanders, he has been a longtime campaigner against mass incarceration [U.S. Prison Population Soars; Vermont Spends More on Prisons than Higher Education, Bernie Sanders Senate Website, February 28, 2008]. He’s also been implicitly condemning the 1994 Violent Crime Control and Law Enforcement Act, which created tough penalties for drug offenders and was once seen as a one of the most popular parts of Bill Clinton’s legacy [Hillary Clinton Laments ‘Missing’ Black Men as Politicians Reflect on Baltimore Unrest, by Amy Chozick and Michael Barbaro, New York Times, April 29, 2015].

But the main focus of Sanders’s run is on trade and economic populism. It’s difficult to see Sanders, an old white man from one of the whitest states in the Union, credibly trumping Hillary Clinton among black voters in Democratic primaries.

Some Republicans, notably Rand Paul and Ted Cruz, are trying to ease the mandatory sentencing that was the hallmark of Bill Clinton’s reforms. Yet they will receive no credit for it. The Democratic Establishment and all major Democratic candidates have already rallied behind the new consensus that the incarceration of blacks is fueling what 96% of Americans expect to be a “long hot summer” of racial violence [U.S. Split Along Racial Lines on Backlash Against Police, Poll Finds, by Janet Hook, Wall Street Journal, May 3, 2015]

And the Democrats already have an explanation ready to explain why they had to favor tough-on-crime policies in the past—there were too many white people. But luckily, thanks to immigration policy, The Atlantic can now sneer:

In 1992, Bill Clinton faced a far tougher electorate than Hillary will this time around. African Americans, Hispanics, and Asians, who constituted almost 25 percent of the voters in 2012, and Millennials, who also lean disproportionately left on cultural issues, were either in school or in diapers. There’s a reason Clinton reminded voters that year that his nickname was “Bubba.” It’s because in 1992, far more than today, a Democrat who didn’t appeal to Bubbas couldn’t win. And in 1992, being “tough on crime” was critical to getting most Bubbas to give a Democrat a second look.

[Hillary Clinton and the Tragic Politics of Crime, by Peter Beinart, May 1, 2015]

Of course, other than replacing the “Bubbas,” the other element here are Millennials who are lean left for a host of favors, not least the punitive repression of conservative ideas on college campuses. The result: among young conservatives and libertarians, there is little willingness to discuss openly the negative consequences of immigration, the racial realities behind crime, or anything else that doesn’t conform to politically correct dogma.

This is a problem—because the color of crime is still, as always, disproportionately black.

According to crime data by the FBI in 2013, blacks, despite being less than 14% of the national population, actually comprised a majority for all those arrested nationwide for murder and robbery [Crime in the United States 2013, United States Department of Justice, Accessed May 3, 2015].

Yet even though blacks are more likely to commit crimes, police officers are if anything more hesitant to use deadly force when confronting them. A study [PDF] that placed participants in “realistic” simulations found individuals felt more threatened by blacks, but less likely to pull the trigger because they didn’t want to be thought of as racist. Moreover, 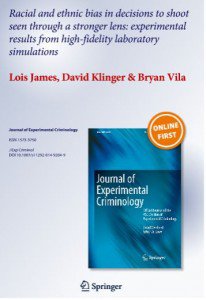 “Across these 300 interviews, I have multiple officers telling me that they didn’t shoot only because the suspect was black or the suspect was a woman, or something that would not be consistent with this narrative of cops out there running and gunning,” said Mr. Klinger…

What’s really happening here: the Social Justice Warrior (SJW) Narrative of insidious White Privilege dominating all our institutions is now essentially part of the platform of one of our two major parties. No matter how many Narrative Collapses we see in incidents like the Duke Lacrosse Case, Trayvon Martin, “Gentle Giant” Michael Brown, and with Freddie Gray in Baltimore, the Left is pursuing a moral vision that is not open to question.

And it is precisely because blacks commit more crime that we are told enforcing the law against them is immoral and racist (even when those enforcing it are black police officers.)

What Sam Francis once predicted, the age of Ethnopolitics, is upon us. Naked racial self-interest substitutes for even the pretense of objective policy analysis. The “New Democrats” of the Bill Clinton era are banished forever, as the Democratic Establishment is now openly aligned with the anti-police and anti-white left wing radicals they once rejected.

And in the ultimate political irony, it may be the impending “first female President” of the United States who deals the finishing blow to Bill Clinton’s legacy.

Baltimore RiotsGOP Share Of The White Vote
<< Previous
Next >>
LATEST