Said In Spanish: Kaeperknick-Style Protest Spreads To High School Girls’ JV Volleyball, Another Mexican Politician Meddles, Flyers Tell Mexicans Not To Help Immigrants, American Latinos Stressed Out, And An Illegal And His Dog 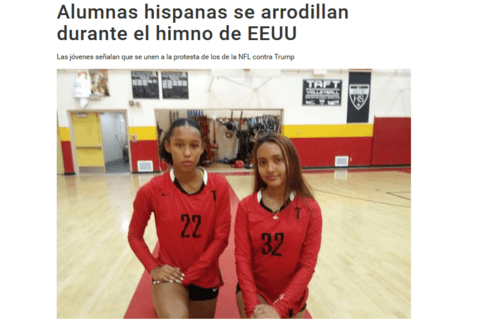 Colin Kaepernick’s #TakeAKnee movement has spread from the NFL to high school girls’ Junior Varsity volleyball. And from blacks to Latinos.

La Opinión, the biggest Spanish-language paper in the United States, gloats about how “two young people of Latino ancestry at the Taft High School in Woodland Hills, California opted to kneel during the national anthem before the beginning of a volleyball game [Alumnas hispanas se arrodillan durante el himno de EEUU, “Hispanic Students Kneel During the American National Anthem,” September 29, 2017].

Significantly, the girls said the protest was “who we are.” And they said they first felt the impulse to protest when Donald Trump was elected.

“With Trump in charge, I don’t feel secure of being Latina. I don’t feel any affection on the part of our President, so why should I show love?”, said Chacon-Salgado, whose parents are from Honduras and Costa Rica, to the Daily News. She added that she feels worried that members of her family can be threatened due to the anti-immigrant rhetoric of the current president.

Why would people be worried about “anti-immigrant rhetoric” unless the person worrying or being worried about was an illegal alien? It’s also worth noting this child of a Honduran/Costa Rican marriage appears to identify with a pan-Hispanic identity rather than an American identity. Sosa also thought her family is a target, as she is “considered Salvadoran and African-American.”

Apparently the audience’s reaction to these junior Kaepernicks were “diverse,” but some parents “supported them and praised their courage.” As did their coach.

Mexican Politician In LA To Fight For DACA

Rafael Moreno Valle, former governor of the Mexican state of Puebla (not to be confused with his grandfather of the same name, a previous governor of Puebla) is a PAN (Partido Accón Nacional) candidate for next year’s Mexican presidential election. 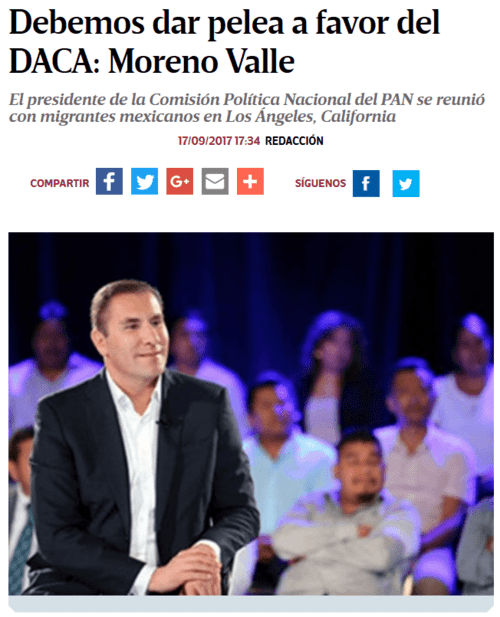 To get in touch with potential voters, he traveled to Los Angeles, which we used to think was part of the United States. In LA, he met with “Mexican migrants” and defended DACA. No American politicians protested.

“You are not alone, we are here to form a team and fight against the cancellation of DACA which puts at risk 680,000 Mexicans who were integrated into this program,” affirmed Rafael Moreno Valle upon meeting with Mexican migrants who explained their problems and presented solutions in the citizen forum #RafaTeEscucha [Rafael listens to you], which was held in this American city [Los Angeles]. “It doesn’t matter how much time you have been in this country, you are Mexicans and we have six months to work together with natural allies in the United States, to lobby for this common cause and avoid repatriation,” he stressed.

We’re constantly told DREAMers are true Americans because they don’t know their home country. Well, Moreno Valle doesn’t agree. He tells them that “It doesn’t matter how much time you have been in this country, you are Mexicans…” That’s rather clear.

Of course, he’s still fighting for these “Mexicans” (his designation) to stay in the United States.

In the “citizen forum” held on American soil, the “Mexican migrants” had plenty of sob stories about their “anguish” in “the current situation that they live in the United States.”

Well, then why not just go home to Mexico?

The “Mexican migrants” complained about “the costs of sending remittances, the inefficiency of the consulate, the impossibility of acquiring property in their country of origin through mortgage credits, or the defenselessness that they live daily.”

The cost of sending remittances they can blame on the very companies that profit off them, the problems with the consulate and property are Mexican problems, and as for the “defenselessness” of daily living, well, they are always welcome to go back to Mexico.

Gasp!— Flyers Telling People Not To Help Migrants (In Mexico) 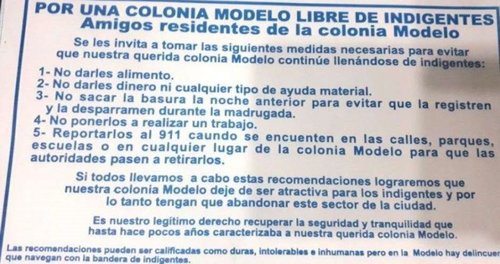 In the neighborhood “Modelo” in the city of Hermosillo, in the Mexican state of Sonora, some people were distributing flyers telling residents not to help migrants (that is, illegal aliens from south of Mexico's border) and indigent people.

You are invited to take the following measures necessary to avoid that our beloved neighborhood Modelo continue filling up with indigents: Don’t give them food. Don’t give them money or any type of material help. Don’t take the trash out the night before to keep them from going through it and scattering it in the early morning. Don’t put them to work. Report them to 911 when they are found in the streets, parks, schools or any other place in the Modelo neighborhood so the authorities can remove them. If we all carry out these recommendations we will make  our Modelo neighborhood stop attracting indigents and thus they will have to leave this part of the city. It is our legitimate right to recover the security and tranquility that until a few years ago characterized our beloved Modelo neighborhood…[these measures] can be characterized as hard, intolerable or inhumane, but in Modelo there are criminals passing themselves off as indigents. 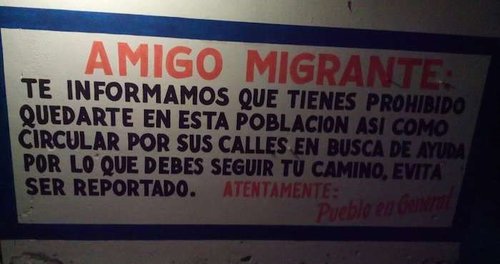 The same article reported a message appearing on a wall last March near Tierra Blanca, Veracruz, on the Gulf coast of Mexico. This one was specifically directed towards migrants:

Friend Migrant: We inform you that you are prohibited from staying in this town or from circulating through the streets in search of help so you should continue on your way, avoid being reported. Atentamente: The General Public

Can you imagine the outcry if the media discovered something similar in the United States?

That was the conclusion of a poll of the Gallup firm, which reported a 2.5% increase in daily anguish among Hispanics after the elections that brought the magnate [Trump] to the White House, an increase greater than that suffered by Caucasians (+0.4%) and African-Americans (+1.1%). Although all Americans received the result of the election of the Republican [Trump] with uneasiness [“all Americans”, really?], those who expressed a greater increase in worry in these last eight months have been Hispanics. This group reported a rise of 2.9% of these negative feelings, in contrast to 2.5% of the Caucasians and 2.4% of the African-Americans.

According to the article, Latinos are stressed from “heated rhetoric surrounding the immigration debate” and probably uncertainty about DACA, sanctuary cities and new ICE policies.

Well, if you’re legal and your family is legal, these things wouldn’t be anything to worry about, would they?

There was one interesting detail:

This deterioration of emotional well-being was much more notable among persons of Hispanic origin who responded to the questionnaire in Spanish than among those who responded in English.

Hmm, so the language we speak isn’t just a random collection of words, is it? Hispanic-origin people who are English-dominant might feel more comfortable in this country. You might even call them more assimilated.

The Heartwarming Story Of An Illegal And His Dog

In Lawrenceville, Georgia, an illegal alien is now facing deportation because of what he did to his dog.

La Opinión reports Freddy Dorantes left his dog locked in the car in the middle of a hot day and now faces deportation [Insólito: Latino Enfrenta Deportación Por Lo Que Hizo Con Su Perro, “Unusual: Latino Faces Deportation for what he did to his Dog, August 9, 2017].

Dorantes left his dog in the cab of his pickup for six hours and was discovered by police, who broke a window to release the animal. They then located Dorantes at a shopping center, arrested him for animal cruelty and discovered his illegal status. At the time of the article’s publication Dorantes was in ICE custody. The dog was taken to an animal shelter.