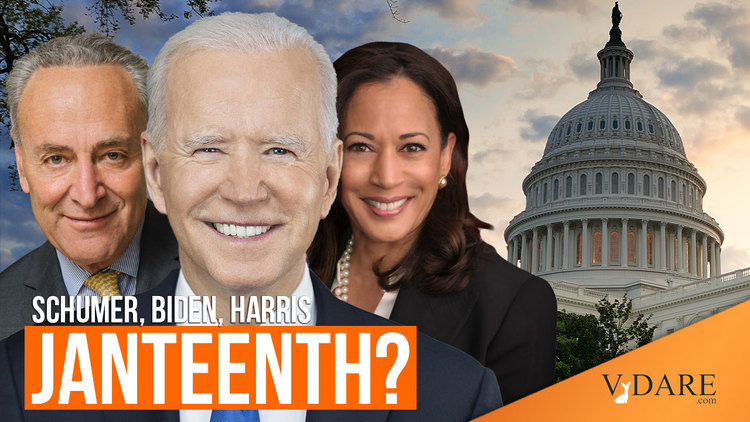 The Democrat/ Main Stream Media Complex put on sackcloth and ashes Thursday to commemorate the alleged worst attack on American democracy ever: the January 6 Capitol protests. Vice President Kamala Harris said history will remember it alongside 9/11 and Pearl Harbor as days “when our democracy came under assault.” President Joe Biden attacked Donald Trump as the enemy of democracy and vowed to ensure that another January 6 would never happen again. A litany of vigils and similar events were also held [Biden condemns Trump as a threat to democracy in speech marking one year since January 6 attack, by Maegan Vazquez, CNN, January 6, 2022]. This melodramatic nonsense—rightly derided as “Janteenth”—serves one purpose: just as Pearl Harbor prompted America to nuke Japan twice, Democrats want to nuke the Historic American Nation. Their two Weapons of Mass Destruction: tyrannical federal “voting rights” legislation that would give them a permanent electoral majority; and a domestic War On Terror that would strip dissident Americans of basic liberties. The good news: Republicans aren’t falling for it.

Thus in a letter sent to his Senate colleagues, Senate Majority Leader Chuck Schumer tied January 6 to the Democrat push to control elections, arguing that the Capitol protesters—who mainly walked around and took selfies—tried to “destroy our Republic.” He insisted Trump and the GOP continue to wage war on “our democracy” and Congress must do something:

January 6th was a symptom of a broader illness—an effort to delegitimize our election process, and the Senate must advance systemic democracy reforms to repair our republic or else the events of that day will not be an aberration—they will be the new norm.

Attorney General Merrick Garland also tied Democrat voting legislation to January 6. “It is essential that Congress act to give the department the powers we need to ensure that every eligible voter can cast a vote that counts,” he said in a hysterical speech that claimed American democracy was under attack [Merrick Garland Issues Dire Warning About Voting Rights on Eve of January 6, by Noah J. Kim, Mother Jones, January 5, 2022].

What are the “systemic democracy reforms” Schumer calls for? The key first step: abolishing the filibuster so his party can pass its “voting rights” legislation. Schumer said the Senate will vote on the filibuster abolishment by Martin Luther King Day.

But this is mostly an empty threat: Schumer doesn’t have the votes. Joe Manchin, Kyrsten Sinema, and other moderate Democrats oppose the idea.

However, Schumer probably does have the votes to pass the voting rights bill—if the filibuster is overturned. Manchin and other moderate Democrats have said they favor it [Schumer calls for 'democracy reforms' to prevent more Jan. 6-style events, by Sahil Kapur, NBC News, January 3, 2022].

The new version is in the same spirit but claims to “moderate” some provisions. It allows states to have some leeway with automatic voter registration and voter ID. For instance, states would only be required to offer automatic voter registration at the DMV rather than a host of other state agencies. The new voter ID provision will allow states to keep an ID requirement, but it will expand the forms of identification that are accepted. Otherwise, the bill still aims to make American elections more prone to fraud and more controlled by Leftist bureaucrats [Key Differences Between the For the People Act and the Freedom to Vote Act, by Daniel Weiner et al., Brennan Center, October 14, 2021].

There’s also a third voting rights bill—the John Lewis Voting Rights Advancement Act. It has narrower ambitions in that it seeks to restore provisions in the Voting Rights Act of 1965 that were struck down in court, as well as empowering bureaucrats to monitor state and local elections.

In 2013, the U.S. Supreme Court effectively nullified provisions requiring states with histories of “discrimination” to preclear any changes they made to their election laws. The John Lewis Act aims to restore the preclearance requirement and encourages non-whites to sue over any election law that might hurt their turnout [What’s in the voting rights bill named for John Lewis?, by Amy Sherman, PolitiFact, October 11, 2021].

Fortunately, these bills haven’t made it very far. Senate Republicans have blocked all three bills. Alaska Sen. Lisa Murkowski was the lone Republican to show any interest: she voted for the John Lewis Voting Rights bill in early November [Republicans Block a Second Voting Rights Bill in the Senate, by Carl Hulse, New York Times, November 3, 2021]. But Democrats hope to try again after a vote to eliminate the filibuster.

So this is why ending the filibuster is key. However, Manchin and Sinema are probably in an increasingly strong position to defy Democratic leadership with the party’s poll numbers in the tank.

Other moderate Democrats may fear the consequences of this action in an election year where Republicans are expected to do very well. Republicans could have the power to pass whatever legislation they want next year. Of course, Biden could use the veto it, but that might not be the case after the next presidential election.

So Democrats may want to rethink filibuster abolition before a Republican takes over the White House again. Moderates are at least aware of this. They also don’t want to lose their seats over the radical legislation Democrats would pass in a filibuster-less Senate.

But other Democrats are willing to gamble on this move. They think these election deforms will ensure a permanent majority for them. They won’t have to worry about elections again if they pass the “Freedom to Vote” Act. That’s why this is the bill for which they claim they need to eliminate the filibuster. Democrats exploit January 6 to get this point across. If it’s just like 9/11 and Pearl Harbor, then something radical must be done to ensure it never happens again. Democrats argue elections must be handed over to them to safeguard democracy and strike back at the democracy-hating, MAGA hordes.

Democrats also aim to use the January 6 weapon to expand the national security state and target middle Americans. Mississippi Rep. Bennie Thompson, the chairman of the January 6 Select Committee, said last Sunday that he and his fellow committee members will push for legislation to expand “intelligence gathering” to prevent another January 6 [Jan. 6 panel to recommend new intelligence-gathering legislation, by Mychael Schnell, The Hill, January 2, 2022]. He gave few details, but it shouldn’t be hard to figure out what direction he’s going in.

The January 6 Committee is already demanding private correspondence from dozens of their political enemies. The purpose is to humiliate and penalize the political opposition. They now want to give the same power to the Deep State. Just imagine what the feds could do with the new powers given to them by their Democrat allies.

The reason January 6 is an obsession for Democrats is because it’s all they have to run on this year. The economy is horrible, inflation is through the roof, the border is a disaster, and crime is only getting worse. They need to distract the American public from real life and scare them into believing Republicans will end democracy if they win the midterms. Meanwhile, Democrats will try to gain the power to legally rig elections in their favor.

Most Republicans, thankfully, see this ruse. There are some Republicans who still echo the Ruling Class line that January 6 was a terrorist attack that threatened “our democracy.” Ted Cruz made that point on the Senate floor this week, but he earned wide opprobrium from the Right [Tucker Carlson lashes out at Sen. Ted Cruz for calling January 6 'a violent terrorist attack,' by Jake Lahut, Insider, January 6, 2022] and a very difficult interview with Tucker Carlson.

These are minority voices though. The majority position is better expressed by, of all people, Sen. Lindsey Graham, who attacked Biden’s insufferable speech as “brazen politicization.”

What brazen politicization of January 6 by President Biden.

I wonder if the Taliban who now rule Afghanistan with al-Qaeda elements present, contrary to President Biden’s beliefs, are allowing this speech to be carried?

Most Republicans ignored the anniversary [GOP Leaders Ignore Jan. 6 Anniversary, by Ewan Palmer, Newsweek, January 5, 2022]. But Reps. Matt Gaetz and Marjorie Taylor Greene challenged the January 6 narrative, even describing it as a “Fedsurrection” [Gaetz on Jan. 6: 'We're ashamed of nothing,' by Dominick Mastrangelo, The Hill, January 6, 2022].

.@RepMattGaetz: "Congresswoman Greene and I are not here to celebrate January 6th. We are not here to obsess about it, but we are here to expose the truth...January 6th last year wasn't an insurrection...but it may very well have been a 'fedsurrection.'" pic.twitter.com/BZkQTmGdFi

.@DarrenJBeattie: "When the internet identified who [Ray Epps] was, and the day after https://t.co/J5eP4RBDJZ ran a report on his former fellow Oath Keeper Stewart Rhodes, the FBI scrubbed his name and his face from their public database."#Fedsurrection: https://t.co/py9Zacy4GV pic.twitter.com/UeYhpLG1hi

We will spend the rest of the year being constantly reminded by the Democrats and their media allies about January 6. It’s campaign season and they need to fearmonger.

But if they lose, we may be spared another Janteenth in 2023. Democrats will finally get the message that Americans just don’t care about it.