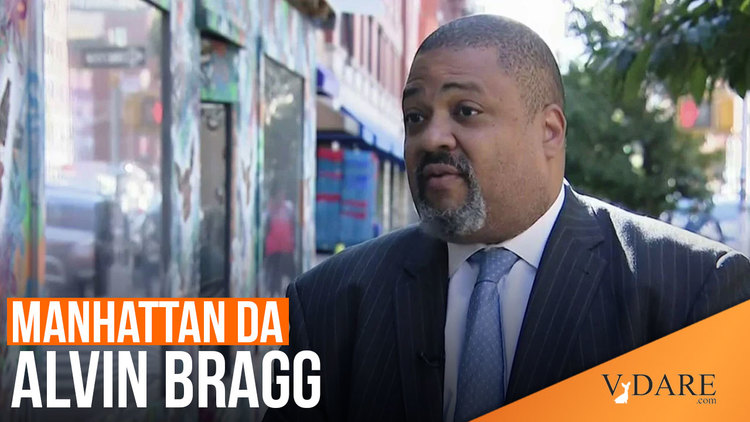 “Racial disparity” is the magic word for ensuring black individuals—who collectively commit the majority of the crime in New York City—are now protected by the brand-new black Manhattan District Attorney.

Manhattan’s new DA has ordered his prosecutors to stop seeking prison sentences for hordes of criminals and to downgrade felony charges in cases including armed robberies and drug dealing. In his first memo to staff on Monday, Alvin Bragg said his office “will not seek a carceral sentence” except with homicides and a handful of other cases, including domestic violence felonies, some sex crimes and public corruption. “This rule may be excepted only in extraordinary circumstances.”

Assistant district attorneys must also now keep in mind the “impacts of incarceration,” including whether it really does increase public safety, potential future barriers to convicts involving housing and employment, the financial cost of prison and the racial disparities over who gets time...

In cases where prosecutors do seek to put a convict behind bars, the request can be for no more than 20 years. (No prison for life.) Armed robbers who use guns or other deadly weapons to stick up stores and other businesses will be prosecuted only for petty larceny, a misdemeanor, provided no victims were seriously injured. Seriously injured.

“ADAs should use their judgment and experience to evaluate the person arrested, and identify people: who suffer from mental illness; who are unhoused; who commit crimes of poverty; or who suffer from substance use disorders. Charges should be brought consistent with the goal of providing services to such individuals.”

Mayor Eric Adams is a a former NYPD captain who was elected on a law-and-order platform. “I have a lot of respect for DA Bragg, a former prosecutor. He has a real vision.” Adams appeared alongside Bragg at the Rev. Al Sharpton’s National Action Network headquarters in Harlem after both men won their Democratic Party primary races.

Armed robberies are now viewed as petty larceny, a misdemeanor, according the new black DA of Manhattan and his first official memo upon taking office. No prison for life either, as prosecutors can only seek 20 years for those accused of a crime.