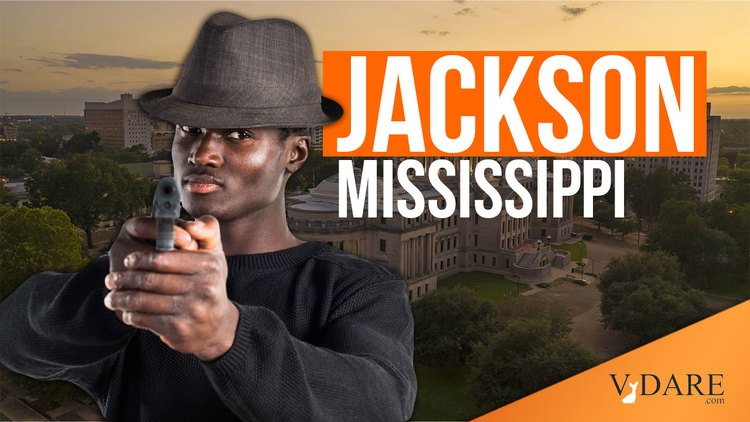 Earlier: WASHINGTON POST: "What ‘Black Panther’s’ Wakanda Can Teach Us About Africa’s History — and Its Future"

‘We’ve seen lifelong friends kill each other:’ How a state capital became one of the deadliest US cities, by  Peter Nickeas and Priya Krishnakumar,CNN, December 28, 2021

Jackson, Mississippi (CNN) Around Thanksgiving, this crisis-plagued state capital saw a series of shootings that pushed the year’s homicide total past 130, setting a grim annual record for a city that over the last two years has quietly become one of the country’s deadliest.

The killings, like so many in another record-setting year of American gun violence, are not the kind that receive national attention. A local business owner was shot outside a barbershop while sitting in his car. A few days later, a man was killed in a shooting that also wounded a 13-year-old boy. A 22-year-old inside a car was sprayed with gunfire at a gas station. A 63-year-old man whose death by gunfire is still largely unexplained.

In the state’s most populous city, a former Confederate stronghold that would later give way to thriving Black business districts and serve as a hub for the Civil Rights movement in the 1960s, residents are now grappling with a gun violence epidemic that spiked at the onset of the Covid-19 pandemic and shows no signs of abating.

“We see lifelong friends kill each other, we’ve seen a son kill his mother and sister, have seen crimes that are based on social determinants and an inability of people to be engaged in institutions in which they thrive,” Jackson Mayor Chokwe Antar Lumumba told CNN during a tour of the city.

The rising gun violence has further exposed the city’s deep-rooted social and political problems, none with easy or tidy solutions. And everyone working against this wave — from the city’s civic, law enforcement, faith, and street outreach communities — is competing not just with spiraling violence, but with a pandemic that laid bare all of society’s inequities when it became ever more difficult to address them.

There have already been 150 homicides this year through December 21, according to police, nearly all of them shootings. The city’s homicide rate is 97.6 murders per 100,000 residents, 15 times higher than the US rate of 6.5, most resulting from gunfire.

When you get up to 80 per 100,000 in a city with more than 100,000 people you’re dealing with a vanishingly small number of places with homicide rates that high,” said Richard Rosenfeld, a criminologist at the University of Missouri-St. Louis.

To put the numbers into perspective, in 2020 St. Louis was the country’s deadliest large city, cataloguing 87 homicides per 100,000, “and that was clearly at the top of the list of larger cities,” Rosenfeld said. “Jackson is now exceeding that level.”

For nearly every major American city, the end of spring in 2020 marked the beginning of an historic wave of homicides. By the end of the year, homicides were up by 29% from 2019, the largest year-over-year increase ever recorded by the FBI. Across much of the country, homicides spiked over the summer, following the Memorial Day murder of George Floyd by a Minneapolis police officer.

That heightened violence has continued through 2021 for many large cities.

More than two-thirds of the country’s most populous cities have seen more homicides in 2021 than last year, a continuation of the troubling increase in homicides that began at the onset of the pandemic in 2020, according to a CNN analysis of over 40 major cities.

Jackson, a solidly Democratic city in a state that is solidly Republican, shattered its homicide record in 2020 with 130 — the previous high of 92 homicides in 1995, about the time when homicides in America peaked.

An 82 percent black city, completely dominated by black elected and appointed officials, with a heavily majority black bureaucracy, happens to boast one of the most shocking homicide rates in not just the United States, but the entire world.

Yes, Wakanda isn’t real. What black people create, independent of white people, is 2021 Jackson, Mississippi: perhaps the most violent city in the world.

It’s a third world city, a reminder of what a day without white people in America would look like, were black individuals collectively left to their own devices.