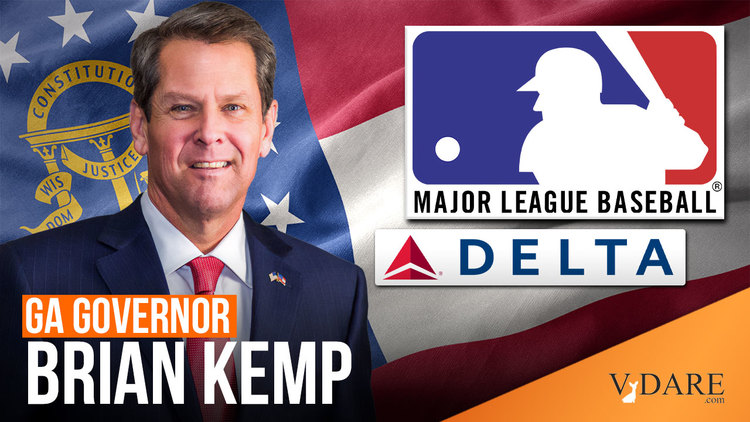 Georgia faces boycotts for passing a common-sense election reform law. Delta, Coca-Cola, and others denounced the bill and the MLB pulled its All-Star game from the state and demanded Georgia support “voting rights.” Once this is would have been enough to stampede Republicans into submission; but not this time: They are fighting back against corporate malfeasance and sticking by election reform. Republicans now realize countering electoral fraud is a matter of sheer survival. Conversely, Democrats want to pass a federal bill that would give non-citizen immigrants and convicts the right to vote and enshrine the 2020 fraud (yes, I think there was fraud) for all time. The future of the Historic American Nation depends on honest elections and its party must fight to secure it.

Georgia’s law is fairly mild. It simply requires photo ID to vote by mail, reduces the number of dubious ballot drop-off boxes, gives greater oversight to the state legislature over elections, and a few other tweaks [Sweeping changes to Georgia elections signed into law, by Mark Niesse, Atlanta Journal-Constitution, March 25, 2021]. U.S. voting laws are notoriously lax by international standards and Georgia is not alone. Iowa recently passed a similar bill and voter reform is under consideration in Texas.

Voter ID laws are popular with ordinary voters, with 72% telling pollsters they favor them—including 56% of Democrats. 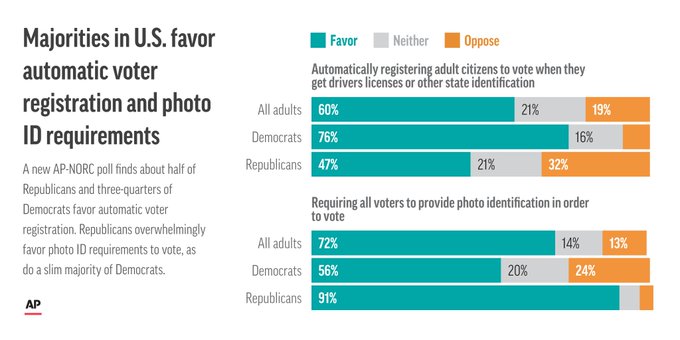 [AP-NORC Poll: Majority In Us Back Easier Voter Registration, by Christina A. Cassidy and Hannah Fingerhut, AP, April 2, 2021]

But President Biden and his Democrats claim these bills are “Jim Crow on steroids.” Thus Biden falsely claimed the Georgia bill ended voting after 5 PM, absentee ballots, and providing water to voters standing in line. Similar misinformation was spread by the Regime Media. This feeds their Narrative that the GOP wants to eliminate voting rights and destroy American democracy [Biden’s Election-Reform Deception, by Karl Rove, Wall Street Journal, March 31, 2021].

Biden has advocated two steps to counter this alleged menace: boycott the rebellious states and pass the Democrats’ new federal voting rights act. The president openly urged the MLB to punish Georgia, which the league soon did [Biden uses ESPN to slam Georgia voting law, by Howard Kurtz, Fox News, April 2, 2021]. So his first step is mostly accomplished. But the second is a bit more complicated.

Significant to VDARE.com readers, Immigrants, both legal and illegal, would be more able to vote under this plan because of automatic registration. Any person listed with a state’s welfare office or Department of Motor Vehicles would be automatically registered to vote. That means plenty of immigrants could get the sacred right to vote without necessarily proving citizenship, let alone legal residency. The bill expressly prohibits prosecuting “illegal immigrant voters who had been automatically registered,” handcuffing states’ power to protect election integrity [H.R. 1 is not 'For the People,' by Mike Lee, USA Today, March 17, 2021].

Former Vice-President Mike Pence has been pilloried for suggesting H.R.1. would give illegals the right to vote. Democrat “fact-checkers” claimed that’s false because the bill doesn’t explicitly give non-citizens that right [Pence falsely says if HR 1 passes, millions of people in US illegally will be registered to vote, by Amy Sherman, PolitiFact, March 5, 2021]. But the bill’s broad provisions can implicitly accomplish that goal.

In fact, enfranchising aliens is a long-time Democrat goal. The New York City Council has repeatedly tried to give aliens in the city the right to vote in local elections [High-profile NYC politicians support noncitizen voting in Big Apple, by Michael Gartland, New York Daily News, February 22, 2021]. It’s just a short step to wanting them to vote in all elections—as they have been doing in California thanks to automatic voter registration there [Some Noncitizens Do Wind Up Registered To Vote, by Pam Fessler, NPR, February 26, 2019].

H.R.1. would ensure permanent centralized Democratic control over every part of America. There’s no way Republicans could win back the White House and Congress if immigrants and felons can vote, and Leftist bureaucrats gerrymander every state to benefit Democrats.

The bill passed the House in early March, but right now it’s doubtful it will pass the Senate. Every House Republican voted against it and every Senate Republican opposes it. To pass it, Democrats would have to eliminate the filibuster, which also doesn’t look likely.

Everyone from Mike Pence (above) to cucky National Review writer Dan McLaughlin attacks it. 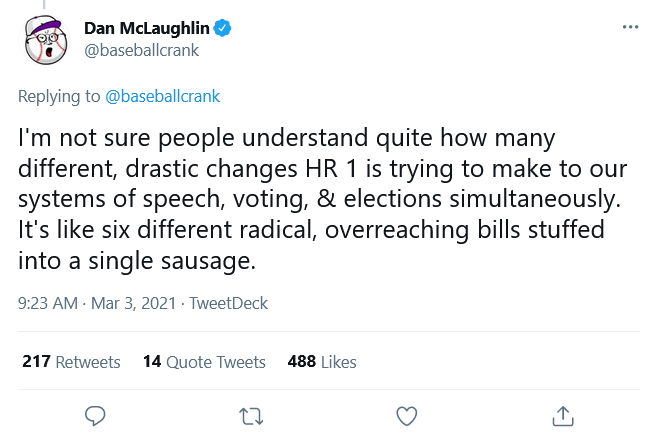 They all know that the GOP and America itself are finished if it is signed into law. It’s a particularly good sign that instead of compromising, the GOP is trying to toughen voter laws to stop immigrant, felon, and duplicate voting.

Georgia, Iowa, and Texas are all battleground states that could turn permanently blue without proper reforms.  But reform is coming at a steep cost for these states.

The Left is calling on Woke Capitalism, its new favorite weapon, to pressure states into retreating. Georgia is the prime target. The withdrawn MLB All-Star Game sends a loud and clear message to other states that may follow the Peach State’s lead. MLB commissioner Rob Manfred said in a statement:

I have decided that the best way to demonstrate our values as a sport is by relocating this year's All-Star Game and MLB draft Major League Baseball fundamentally supports voting rights for all Americans and opposes restrictions to the ballot box.

Significantly, the announcement was reportedly driven by sponsor pressure, not the players. 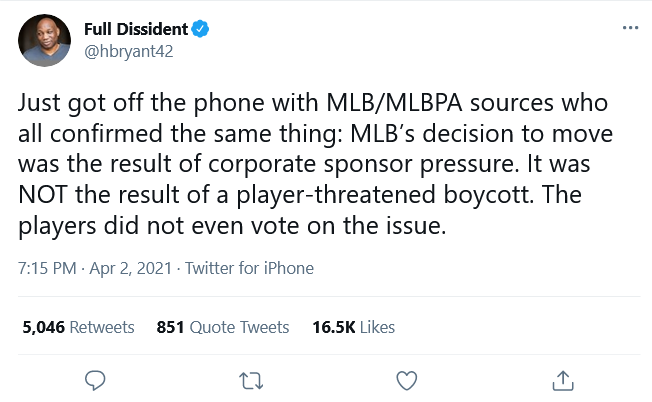 Several baseball teams issued their own statements in support of the league’s decision.

Delta Airlines and Coca-Cola, both based in Georgia, attacked the bill as an assault on democracy. Delta CEO Ed Bastian said in a public memo that

…The entire rationale for this bill was based on a lie: that there was widespread voter fraud in Georgia in the 2020 elections. This is simply not true. Unfortunately, that excuse is being used in states across the nation that are attempting to pass similar legislation to restrict voting rights. 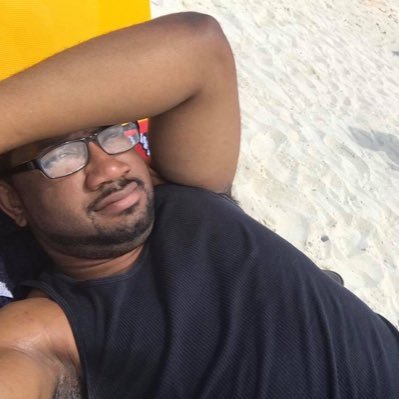 Some “objective” media outlets are shamelessly offering tips to corporations that want to punish states that stand for election integrity: 3 ways companies can help fight Georgia's restrictive new voting law, by Khristopher J. Brooks, CBS Moneywatch, April 2, 2021. CBS’s Khristopher Brooks [right, Tweet him] openly relied on Black Lives Matter activists to tell corporations things they must do right now. Their three key demands: do not donate to Republicans, “spread awareness,” and back the insidious “For the People Act.” (CBS apparently realized this article was a bit too much and subsequently edited it to sound less like BLM runs its editorial room) [Activists are calling on big companies to challenge new voting laws, by Khristopher Brooks, CBS News, April 2, 2021].

But in spite of this mounting pressure, Republicans are choosing to fight back. Thus the Georgia House voted to strip Delta of tax breaks over its pressure [Georgia House passes bill stripping Delta of tax break after airline's CEO slammed new election integrity law, by Andrew Mark Miller, Washington Examiner, April 1, 2021] This is a good sign, even though the Georgia Senate wimped out). Congressional Republicans—led by South Carolina Rep. Jeff Duncan—want to strip the MLB of its antitrust protections. Donald Trump issued a rare statement from retirement urging his supporters to boycott the league [Trump Calls for Major League Baseball Boycott, by Daniel Politi, Slate, April 3, 2021].

Even Georgia Gov. Brian Kemp, who behaved disgracefully during the 2020 election, is partially redeeming himself by standing firm against corporate bullying. He held a press conference Saturday where he blasted the state’s enemies and reaffirmed his commitment to the law [Kemp claims lies from Biden, Stacey Abrams to blame for events leaving Georgia, Graham Cawthon, WJCL, April 3, 2021].

This is quite a contrast to how Republicans have usually acted in the face of corporate backlash. For example, Then-Governor Mike Pence did a U-turn and neutered Indiana’s religious freedom bill after Big Business denounced it as anti-homosexual. And South Dakota Gov. Kristi Noem recently rejected a bill that would bar trans athletes from women’s sports due to pressure from the NCAA and corporations.

But Kemp, otherwise a typical establishmentarian, is showing far more backbone than Pence and Noem. So is the rest of the GOP. The difference: the GOP realizes that these election reform laws are critical to its survival. The GOP can continue to exist with transgender players in women’s basketball—but it can’t with millions of illegals and felons voting.

Of course, these Republicans legislators probably desire election reform for purely self-interested motives. But that doesn’t matter. The result still benefits the Historic American Nation. And we need the Stupid Party to fight for us.

Hopefully, Republicans will also begin to oppose mass immigration for the same reasons they support Georgia’s law. Continuing to import millions of future/undocumented Democrats is just as dumb as allowing millions of illegals to vote. Immigration is the ultimate form of voter fraud,

Corporations are on the opposite side for both issues. The GOP/GAP needs to realize that serving corporate interests will cause its own ruin. If it can thumb their noses at the corporations shrieking over election reform, it can do the same when they ululate about patriotic immigration reform.