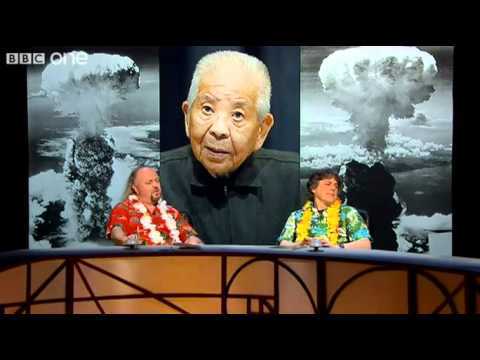 "And Even More Carefully If We Do Wish To Give It"

"With apologies to Dutch listeners, and a note to self that we must tread carefully if we wish not to give gratuitous offence, and even more carefully if we do wish to give it."

Stephen Fry, after using the phrase "double-dutch" on the BBC's The Joy Of Gibberish. Words to live by.

Fry was recently forced to apologize to the Japanese for a joke about the Hiroshima bombing that ended the war with the formerly evil empire of Japan. In a display of either astonishingly good or astonishingly bad luck, Tsutomu Yamaguchi, who died recently at 93, was bombed in both Hiroshima and Nagasaki, but survived. The UK Guardian says

[Fry]voiced amazement that Yamaguchi had been able to use public transport so soon after the attack, prompting panellists to poke fun at Britain's train services, including a joke about "the wrong kind of bomb [on the tracks]".

This led to a lot of whining and death threats from Japanese who, having forgotten Pearl Harbor, the Bataan Death March, and the Rape of Nanking, see themselves as the victims of World War II.