Living as a white guy in America after having grown up elsewhere, I must say, I don't see much ill-will towards blacks among my fellow whites. There are traces of it, I know; I read the comment threads. The vast majority of white Americans, however, wish no harm to blacks, nor any restriction of their civil rights. I never hear that from people I mix with, and I mix with all sorts. What I do hear is a constant, steady, undercurrent of resentment, expressed in guarded tones for fear of the taboo enforcers — resentment of what you can only call black privilege.

You know what I mean: the Affirmative Action slots and set-asides, the excuses and free passes, the mealy-mouthed newspaper reports about "the robber was a tall man in his thirties," all that.

You don't file your taxes, you end up in jail; Al Sharpton doesn't file his taxes, he's invited to the White House. Black privilege.

It makes for resentment. It goes against the American grain. We're supposed to be a country without a privileged class.

I was at a party the other day chatting to a middle-aged white American guy I know, a teacher in a New York City public school. He was complaining about the difficulty of disciplining kids: "He does something truly outrageous, you send him to the principal's office; an hour later he's back at his desk, laughing at you."

In situations like that, I try to encourage people to be more frank, which most people won't be without encouragement. So I asked straight out if this was the result of official guidelines — city, state, or federal — about easing up on disciplining blacks.

"Oh yeah!" said the guy, relieved to be with someone he could open up to. "A white or an Asian kid, they'd get suspended for sure. A black kid, same offense — right back in his desk an hour later." 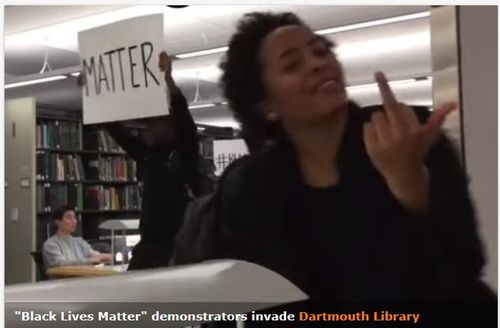 I hear it all the time. I read it, too. Here I am reading it on CampusReform.org, an excellent and very fair website, by no means Alt-Right. The story is dated June 2nd: Dartmouth gives BLM students pass for profane library protest (By Peter Fricke).

BLM is of course Black Lives Matter, George Soros's latest front in the war against normal life in the U.S.A. The profane library protest occurred last November 12th — you may remember it — when 150 BLM activists descended on the Dartmouth college library where students were engaged in quiet study and research.

The activists made a lot of noise, addressing white students with well-documented screams of "F*** you, you filthy white f***s!," and "F*** you, you racist s***!" There was a certain amount of touching and shoving, although no-one seems to have been socked in the jaw — a sad fact by itself, in my personal opinion.

Well, the administration of Dartmouth College conducted a lengthy investigation of this outrageous incident. Their conclusion was spelled out in a letter to Dartmouth alumni from Meg Ramsden [Email her] Assistant Director of Alumni Relations:

The College … after concluding its investigation with respect to the complaints and studying what was seen in the video in Baker-Berry Library … determined that there were no specific violations of the Standards of Conduct. In essence, no rules for which there are recorded and communicated sanctions were broken.

Translation: Nothing to see here, folks. Move along, please.

I leave you to imagine the consequences if 150 nonblack students had occupied the library and screamed obscenities at blacks trying to study.

Blacks, however, get away with it. Why?

More Black Privilege, news, also on CampusReform.org, we hear about Mr. and Mrs. Christakis of Yale University. Radio Derb reported on them last November. The Christakises, you may remember, supervised Silliman College, one of Yale's residential facilities.

The occasion of that November report was a protest by black students against Mrs. Christakis. The Intercultural Affairs Committee had sent out a campus-wide email warning students to be sensitive when selecting their Halloween costumes, so that nobody's feelings would be hurt by seeing a turban, a feathered headdress, or a sombrero, or — oh, heaven forbid! — anyone in blackface.

Well, Mrs. Christakis had pushed back gently against that email, sending out an email of her own to Silliman students, saying, inter alia:

American universities were once a safe space not only for maturation but also for a certain regressive, or even transgressive, experience; increasingly, it seems, they have become places of censure and prohibition … Is there no room anymore for a child or young person to be a little bit obnoxious … a little bit inappropriate or provocative or, yes, offensive?

That got the protestors out, screeching and wailing at Mrs. Christakis for her shameful, unthinkably insensitive defense of free expression.

That was last November. The protests never stopped. Mr. and Mrs. Christakis have been under some level of harassment ever since. At the Silliman College graduation ceremony May 23rd, several students refused to accept their diplomas from Mr. Christakis.

Now the Christakises have had enough. [Anti-speech activists drive Yale administrators to resign, by Peter Fricke, Campus Reform, May 26, 2016] Mr. Christakis has withdrawn from his administrative duties at Silliman, and will concentrate on his teaching and research. Mrs. Christakis is quitting college work altogether, resuming her previous career in early childhood education because—actual quote from her—"preschool students don't try to get you fired."

Hey, be careful, lady; don't give them ideas.

The Yale administration has of course been vigorous in defense of the Christakises, and in disciplining the black students who have been harassing, intimidating, and insulting them this past seven months. [Laughter.]

Just kidding there, of course. In fact Yale admin has cringed and whimpered before Black Privilege as colleges always do.

It is of course redundant to point out that if the races were reversed here—black administrators driven to resignation by screeching white brats—Interstate 95 would be backed up all the way to the New York state line with carloads of investigators and prosecutors from the Federal Department of Justice determined to root out the perpetrators and wreck their lives.

Black privilege: We're fed up with it. Is there a way back to equal, impartial treatment for all Americans? Not outcomes: innate race differences will always prevent that. But treatment?

One final, related, point: I've described myself somewhere or other as "a freedom of association absolutist." I'll allow for a small number of exceptions in public institutions like the military, but my default position is that nobody should have to associate with persons, or classes of persons, they'd rather not associate with.

That position is of course outrageously at odds with current social and political dogmas. All the power centers of our society have been working for decades now to stamp out freedom of association as I understand it.

Here's the latest example: Harvard University. Many Harvard students belong to social clubs: the usual Greek fraternities and sororities, but also a dozen or so so-called "final clubs," of which the most famous is the Porcellian, which dates back to the 1790s.

Most of these clubs are single-sex. That's got the Harvard administration mad, because … Well, let College Dean Rakesh Khurana explain. This is a quote from a May 6th letter he wrote to Harvard President Drew Faust:

The discriminatory membership policies of these organizations have led to the perpetuation of spaces that are rife with power imbalances.

Yes, there really are people who talk like that. "Spaces" … "power imbalances" … This is the cant of our age.

There's not a whole lot Harvard can do about these clubs, which are privately owned and administered. What they can do is hit out at the students who patronize them. And that's what they're doing.

Starting with the 2017 freshman class, students in these clubs will no longer be qualified for leadership positions — captain of an athletics team and such. They'll also be shut out from fellowships, like Rhodes and Fulbright Scholarships.

Sure, it's petty and spiteful. We have to make sure those spaces aren't rife with power imbalances, though.

In case you’re wondering, Rakesh Khurana is an Indian immigrant. Ms. Drew Gilpin Faust was “brought up in the South,” according to Wikipedia, but check out Steve Sailer’s scathing critique of her career here and here.