ATTN WHITE Man, I have no guilt disturbing your brunch. Its YOU that has no right to be here. #blackbrunchnyc pic.twitter.com/mFRq5Q9hbe 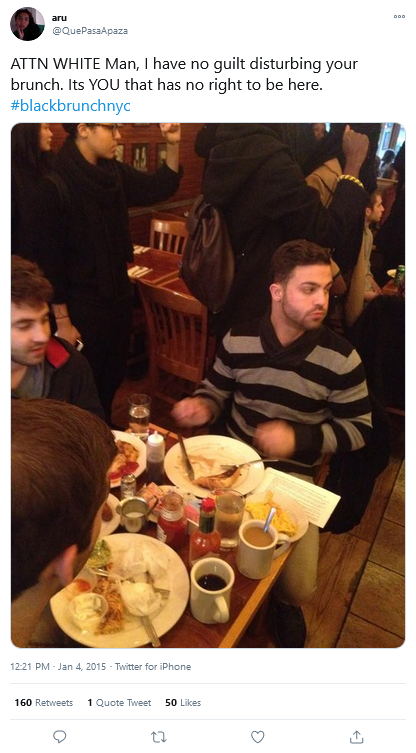 Clad in black-ops black from head to toe with fists held high, stylin' members of the so-called "Black Brunch" brigade look like they're ready to break into some old-school New Jack Swing dance moves. And 5, 6, 7, 8!

But seriously, all you hate-mongering, racist oppressors. You must banish your colonialist, imperialist and patriarchal impulses to mock. The "comrades" (yes, they really call themselves that) who don the solidarity-enhancing Black Brunch costume are sending a revolutionary, transformative message: This is war!

This weekend, an organizing manual obtained and published by the Weasel Zippers blog (which was subsequently knocked offline for 12 hours by retaliatory activists) explained the Black Brunch agenda. Only those who are "black and of the African diaspora" received the guide. Black Brunch, they were told, is "a form of resistance and a direct action tactic" to "reclaim our humanity and right to unapologetically hold space in public."

By "holding space in public," they mean storming into a private business and screaming in your face while you're spending your hard-earned money as other hardworking people try to make a living serving up a nice meal.

The farce, of course, is that this impudent "resistance" movement deliberately chooses marshmallow-soft targets where they will encounter absolutely no resistance of any kind to their trespassing.

Black Brunchers didn't stomp their way into truck stops, police cafeterias or military bases. They targeted privileged liberal enclaves in Oakland, San Francisco, Los Angeles, Baltimore and New York City over the past month to raise the consciousness of unsuspecting midmorning diners. The Black Brunch bunch earned their badges of courage by barging into coffee shops, blocking lines at hummus snack stands and even grandstanding at an Apple computer store (huh?) where sympathetic hipsters and pliant employees simply rolled over.

Note: The only clubs the enemy enslavers wielded were their club sandwiches. The only sticks in sight were cinnamon cocoa stirrers.

While annoyed parents covered their hungry toddlers' ears, the grievance-mongers whipped out their smartphones to document their disruption of "white spaces." Protest pics STAT! One defiant Black Brunch marcher asserted on Twitter: "We take up the space that's so often denied us in society and grieve collectively." Another intrepid combatant courageously castigated her enemy (from the safety of her keyboard):

"ATTN WHITE Man, I have no guilt disturbing your brunch. Its (sic) YOU that has no right to be here."

Actually, several photos of the protests showed non-white customers and employees suffering along with the rest of the Privileged White Supremacists. But no matter. No justice, no quiche!

Opposing racism now means practicing it in the most obnoxious manner possible. The Black Brunch bigots painted every innocent customer as a practitioner of "genocide." One participant ordered people of color to "STAND in deference and solidarity." Another accused a black restaurant manager of "internaliz(ing) white supremacy."

This self-indulgent overreach is a hallmark of modern leftist organizers. During the Bush administration, the illegal-alien activist movement was overrun by reconquistadors burning American flags and chanting La Raza hate slogans as they demanded full amnesty and government benefits. Under President Obama, Occupy Wall Street devolved into a circus of rape tents and defecators.

Post-Ferguson, the social justice mob has now looted and burned down stores in its own working-class neighborhoods, cheered the execution of white and minority police officers, and alienated its erstwhile allies with destructive temper tantrums. In Portland, left-wing agitators threw a hissy fit at Democratic Sen. Ron Wyden's town hall—just as a 100-year-old veteran was being honored for his World War II service.

These entitled thugs have beclowned themselves, plain and simple. Their worst enemies are the ones in the reflections of the windows they're smashing. The worst racists are the ones smirking in their own Instagram selfies.

Earth to Black Brunch brats: You're not righteous. You're just rude.