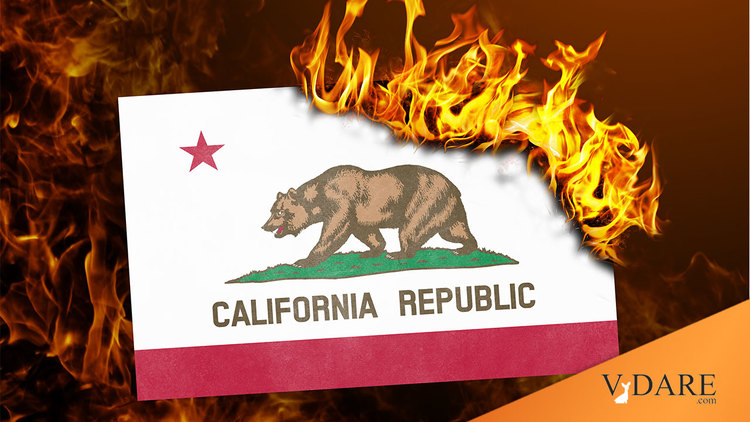 By the late 1960s and early 1970s, the rot had long set in in California in general and the San Francisco Bay Area in particular. Street crime had exploded. Then came the Manson murders and other serial killings, the drug culture and biker gangs, and the student riots at Berkeley. And black criminal terror had begun, manifested in the Black Panther Party’s cop murders, the mayoralty of Lionel Wilson in Oakland, the Symbionese Liberation Army’s political terrorism and assassinations, and open race war in such horrors as the black-on-white Zebra Murders. It all seemed to start in California and now it manifests itself across America today in such crimes as Darrell Brooks’ Christmas Parade Massacre. But it was immigration that destroyed the California I knew and loved as a child.

I remember the crimes and chaos, watching the news as a wide-eyed child, from the Patty Hearst and Chowchilla kidnappings to the dire warnings from everyone I knew never to venture into Oakland. I remember forest fires, stagflation, bums on the streets of San Francisco, and the American Civil Liberties Union’s visit to my high school, telling students they had a “right” to smoke tobacco.

It was a crazy time. I listened to adults talk about what was going on, but they were mostly things happening somewhere else, outside of my happy suburb. I was a happy child in my small corner of the world, which for me, and the white people insulated in the rural towns and growing suburbs outside the Bay Area, was still a paradise.

We had great schools and teachers, well-funded with academic and behavior standards that were enforced. The lifestyle was perfect for kids. Lots of other children were around to play with. Adults looked out after children.

Vacations were in a resort town in the Sierra Nevada mountains, complete with local lake, in a cabin that my grandparents and their children built mostly themselves during the Eisenhower Era’s prosperity. It was a friendly place with an outdoor movie theater and miniature golf. We hiked and spent lazy days at the lake.

Back when life in California revolved around the growing and harvesting seasons—when we ate plums, oranges, apricots, and nectarines only seasonally—city and countryside lived in harmony. (California’s population was only 20 million in 1970 vs. nearly 40 million in 2020.) Industry was on the coast, agriculture was inland. One looked forward to summer and the harvest when fruit was ready to be eaten, rather than harvested early to get it to market before it was ripe.

The San Francisco Bay Area had perfect weather; few days were too hot or too cold. One did not really need air conditioning except a few days of the year. My family subscribed to three newspapers: the San Francisco Chronicle, the Oakland Tribune, and the local Alameda Times-Star. We also had U.S. News and World Report, the most moderate and straightforward of the three major weekly news magazines. Now, all the newspapers and weeklies are shadows of themselves.

Back then, I read them all. I knew what was going on in the world at large. But my mostly white small suburb, lots of children, and strong churches were the center of my life. The “diversity” in my small town was the Chinese-American family with the only Chinese restaurant.

Not that our family ever ate out. My mother made pizza from scratch, putting the covered dough on a table for the sun to warm it while it rose. A Filipino family ran one of the corner stores, and a Samoan family down the street always insisted that one come in for a bite to eat. But most of the small businesses—the grocer, the butcher, and the toy store nearby—were owned and run by white men and family who were members of and lived in the community. (Unbeknownst to me, VDARE.com’s future Editor Peter Brimelow had moved to the San Francisco Peninsula, enrolled in Stanford and was also enjoying the California life.)

My uncles on my mother’s side were in the nascent computer industry in San Jose and the Peninsula. Visits to them were always fun. They lived in suburbs that abutted the still widespread agriculture. South of Hayward, most of the East Bay were fields of vegetable crops, while in the South Bay and Peninsula, stone fruit fed the cities and suburbs. Children did not flood the fields to raid the delicious crops.

The paving-over of the San Francisco Bay area is now complete. Now, not a field or stream is to be found from Richmond in the north down to San Jose in the East Bay. Similarly, except for the designated green space in the hills of the Peninsula, most of it west of the 280 Freeway, the Peninsula has been paved over either to house the very expensive cheap labor imported for the tech and service industries, or to house those fleeing the lowlands of the Peninsula for the much more expensive mansions of the tech and political elite in the hills.

Immigration destroyed my California. When I was young, we had a few Vietnamese refugees, but the floodgates opened after the Reagan Amnesty in 1986. The once-verdant Central Valley is on its way to being another San Francisco Bay Area, thanks to Third World immigrants, mostly Hispanics and Indians, as well as the whites fleeing the Bay area. Suburbanization proceeds apace. Soon the farms will be gone, just as they’re gone from the Bay Area. The upper middle class is moving into the Sierra Nevada mountains, where formerly rural communities are now commuter colonies for those who don’t want to be near the blacks and immigrants in the crime-infested Bay Area—where high rents are driving them too into the Central Valley.

Despite massive wealth, the tech industry, and the best restaurants in America, and the ousting of communist District Attorney Chesa Boudin—son of two of the worst terrorists of the 1970s, David Gilbert and Kathy Boudin—San Francisco continues to freefall.

I left it not three months ago. But going back to visit friends and eat sushi—good sushi is rare as hen’s teeth in Florida—the city had worsened even in that short time. The Geary Corridor was once a second Chinatown, with restaurants and thriving small businesses, mostly the ever-present Chinese grocer. The Chinese don’t buy frozen or canned fruit and vegetables. Many white small businesses such as delis, cobblers, insurance agencies are there, too. But the Flu Manchu pandemic closures made the Corridor a ghost town, and now it’s overrun by homeless drug addicts and the ever-present black thugs who break into parked cars without fear of punishment.

This is why I cry for California, and why I moved to the Free State of Florida, as they call it here. Florida has issues, notably in-migration from Americans who are also causing the state to pave over. Yet where I live, black criminals are not coddled, homelessness is not tolerated, the roads are free of potholes, graffiti does not mar buildings, and, notably, police strictly enforce the law. Officers are on patrol, not racing from crime scene to crime scene as they do in San Francisco or Los Angeles, where they are prohibited from enforcing laws against the petty crimes that slowly destroy a community.

The small-town paradise in which I grew up is gone, mostly because of immigration and the leftist tyranny that immigrants brought not only to the physical space, but also to the political space.  California… Stanford University,… the Bay Area… none are the same.

Federale’s opinions do not represent those of the Department of Homeland Security or the federal government, and are an exercise of rights protected by the 1st Amendment to the Constitution of the United States.