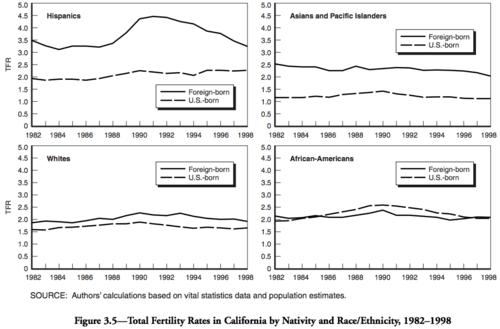 This graph is from p. 26 of the Public Policy Institute of California’s 2002 book, Understanding the Future of Californians’ Fertility: The Role of Immigrants by PPIC demographers Laura E. Hill and Hans P. Johnson. They calculated the Total Fertility Rates (babies per woman per lifetime) by ethnicity in California from 1982 onward, demonstrating the huge pig-in-a-python bulge among foreign-born Hispanics that followed the 1986 amnesty legislation. This had a massive impact on California’s public schools, first overcrowding them, then leading to a colossally expensive school construction program (e.g., the $578,000,000 Robert Kennedy Schools building on Wilshire Blvd.). Hill and Johnson write on pp. 27-28:

And the demographers go on to explain how the amnesty caused this:

“Why did total fertility rates increase so dramatically for Hispanic immigrants? First, the composition of the Hispanic immigrant population in California changed as a result of the Immigration Reform and Control Act (IRCA) of 1986. In California alone, 1.6 million unauthorized immigrants applied for amnesty (legal immigrant status) under this act. The vast majority were young men, and many were agricultural workers who settled permanently in the United States. Previous research indicates that many of those granted amnesty were joined later by spouses and relatives in the United States… As a result, many young adult Hispanic women came to California during the late 1980s. We also know that unauthorized immigrants tend to have less education than other immigrants and that they are more likely to come from rural areas. Both characteristics are associated with high levels of fertility. As a result, changes in the composition of the Hispanic immigration population probably increased fertility rates.

“Another possible reason for the sudden increase in fertility rates for Hispanic immigrants is also related to IRCA. Because many of those granted amnesty and their spouses had been apart for some time, their reunion in California prompted a “catch-up” effect in the timing of births…”

I’ve been pointing out this piece of history repetitiously since 2002. But it’s never ever caught on. It’s just too alien to the reigning pieties to even think about the subject.

I should be a consultant to some New Media firm in San Francisco to determine what won’t catch on and go viral. They would just show me memes that they are considering promoting. Anything I find interesting would immediately go in the circular file as a hopeless waste of time.