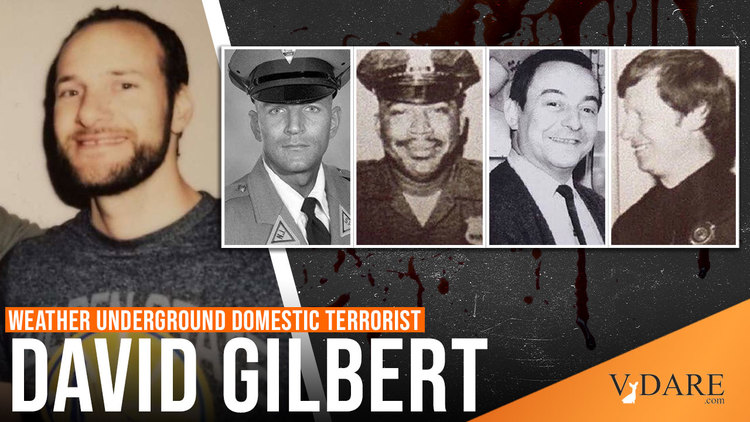 Earlier: Ann Coulter On Chesa Boudin: How To Get Into Harvard Without Good S.A.T. Scores—Have Communist Terrorist Parents!

Disgraced Andrew Cuomo abandoned the New York governor's mansion last week, leaving nearly 15,000 dead nursing home residents in his wake as a result of a catastrophic executive order forcing their facilities to take in COVID-19-infected patients. He also left behind a bevy of female underlings with a mountain of sordid sexual harassment allegations. And, reportedly, Cuomo also ditched his poor dog, whom two state troopers claim he tried to pawn off to any willing taker.

But that's not all.

In the dark of night, safe from public scrutiny or accountability, Coward Cuomo granted clemency to one of the radical left's most notorious anti-cop convicts—a man whose family's elite privilege I've chronicled for the past 19 years. David Gilbert is the Weather Underground domestic terrorist sentenced to 75 years-to-life in prison for his role in the infamous 1981 Brink's robbery in Nyack, New York. Gilbert and his wife, Kathy Boudin, were leaders in the 1960s group of rich-kid agitators who bombed government buildings and corporate headquarters and aided convicted felons in jailbreaks.

The married militants acted as chauffeurs for the Black Liberation Army robbers who held up a Brink's truck at a Rockland County mall and stole more than $1.6 million. Two of the holdup victims gunned down in the botched Brink's robbery were police officers. One was a private security guard. All three were military veterans from working-class backgrounds.

As I've noted previously in my columns dating back to 2002, Gilbert and Boudin's abandoned son, Chesa, is the pampered Rhodes Scholar and now pro-criminal district attorney in San Francisco who has faithfully whitewashed his biological parents' crimes (and those of his unrepentant adoptive parents, Weather Underground poster couple Bill Ayers and Bernardine Dohrn).

What a steaming crock of San Francisco street manure.

Gilbert was defiant at trial and has called himself a "political prisoner" for the entirety of his 40-year imprisonment, which he has spent advising Black Lives Matter leaders and other fledgling Marxist militant groups. Gilbert called the deadly shootings and robbery "revolutionary expropriation." As one of his sycophants explained, the domestic terrorist crimes were "aimed at supplying financial support for the Black Revolutionary Army, a militant spin-off from the Black Panther Party."

Chesimard was convicted and sentenced to life in 1977 but escaped from prison two years later with help from violent left-wing accomplices. One of those thugs, Black Liberation Army killer Tyrone Rison, admitted to participating in a series of armored-car robberies, including a $250,000 heist in the Bronx on June 2, 1981, that left a Brink's guard dead. Rison also confessed to taking part in the planning of the Brink's robbery in which Boudin said his father and mother meant "no harm."

I remind you, again, as I have for the past two decades, that police officers Waverly Brown and Edward O'Grady and Brink's guard Peter Paige were murdered during the homicidal siege. Brown, who served in the Air Force after the Korean War, had two grown daughters and a teenage son. O'Grady, who served in the Marines and did two tours of duty in Vietnam, left behind a wife and three children—6, 2 and 6 months old. Paige, a Navy veteran, also left behind a wife and three kids—19, 16 and 9.

If you care to take a stand against Cuomo's last act of remorseless corruption and against the anarchotyranny that grips our country still today, please consider contributing to the O'Grady-Brown Memorial Scholarship Fund, which honors the memory of the fallen Nyack Police Department officers by supporting students pursuing careers in law enforcement. More information at http://www.ogradybrown.com.