It should come as no surprise that Stanford has followed the University at California, Berkeley (UCB), in suppressing free speech, and insulting a distinguished alumnus as well.   Just as VDARE.com's conference was cancelled at Tenaya Lodge in Yosemite, (illegally, by the way as Tenaya Lodge is a Federal contractor and on Federal property) so did Stanford University, who once thought they were superior to UCB in academics and sports.  But Stanford has been reduced to the also ran to UCB's virulent Cultural Marxism.

Stanford though thinks too much of itself.  It is nothing but the obedient servant of radicals like Jesse Jackson who shut down Western Civilization studies at Stanford in 1996 and the puerile student body who  recently voted not to bring back Western Civilization.

And this just in—VDARE.com Editor Peter Brimelow’s alma mater, Stanford’s  Graduate School Of Business, just cancelled a debate between Brimelow and Tim Kane of the Hoover Institution to be held by the Stanford chapter of the  Adam Smith Society, citing the destruction of Berkeley as the reason they’ve been scared off. [VDARE.com Conference Cancellation Update: Two Rays Of Hope!, Lydia Brimelow, VDare, February 6, 2017]

This is an example of the heckler's veto, or more accurately the terrorists' veto of freedom of speech.  But just as the Terrorist Veto of the speech at UCB by Milo  Yiannopoulos was not so much a Terrorist Veto, but a conspiracy between the terrorists and the UCB administration and the lesbian university police chief to use the threat of violence or violence that was allowed by inaction to occur to squash Milo's speech, so the administrators at Stanford did the same.

But just as the UCB Police allowed the violence in Berkeley to happen, and had the resources to quash to violence quickly and effectively, so the Stanford Department of Public Safety (DPS), a private police department, an accredited and authorized law enforcement authority deputized as Santa Clara County Deputy Sheriffs, but could have easily quashed any violence or provided the necessary security, especially given the Department's bragging about their skill and abilities for presidential visits and major events at the 50,0000 capacity Stanford Stadium. 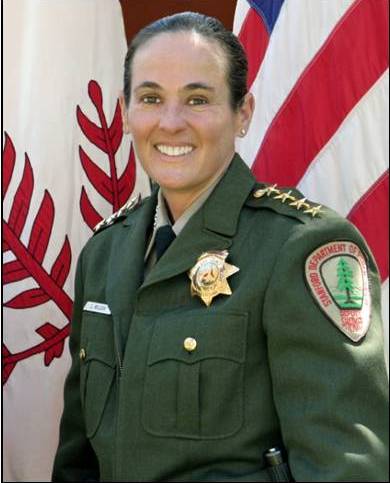 So, if Stanford GSB Dean Jonathan Levin [Email him ] told the student group that Stanford could not provide security, he was lying.  I know this because I worked with the Stanford DPS before, and they can get the job done. (And bring a world of hurt on rioters if necessary.)  And Stanford could easily forestall any riots or violence by letting students know before hand that such activity would violate the Honor Code and result in expulsion.