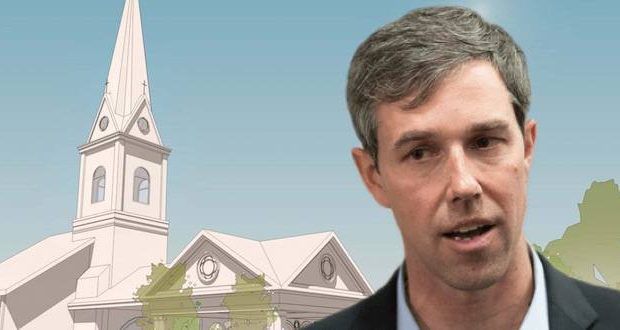 It’s not surprising that Robert “Beto” O’Rourke wanted to apply an ideological test on churches, it’s just surprising he felt so comfortable saying so. Even liberal journalists admit stripping tax-exempt status from churches that oppose homosexual marriage is unconstitutional. However, there has been a concerted effort in the Main Stream Media from the New York Times on down to strip organizations they don’t like, notably your humble servants at VDARE.com, of tax-exempt status on political grounds. Some random kritarch could decree it at any moment. What’s more, selective law enforcement is not some forthcoming nightmare, but an existing reality of American life. If it wasn’t, Leftist churches and organizations that already engage in illegal activity would be suffering a price.

Beto O’Rourke is making open promises of repression a staple of his failing campaign. First it was, “Hell yes, we’re going to take your AR-15” [O’Rourke’s debate-stage vow: ‘Hell yes, we’re going to take your AR-15, by Paul Steinhauser, Fox News, September 12, 2019]. Then, in a CNN/"Human Rights Campaign" LGBTQ  Town Hall, in response to a question about whether religious institutions that oppose same-sex marriage should lose tax exempt status, he said, “Yes, there can be no reward, no benefit, no tax break for anyone or any institution, any organization in America that denies the full human rights of every single one of us.” [N.B. “anyone”—VDARE.com emphasis added]

Beto O’Rourke on religious institutions losing tax-exempt status for opposing same-sex marriage: "There can be no reward, no benefit, no tax break for anyone ... that denies the full human rights and the full civil rights of every single one of us" #EqualityTownHall pic.twitter.com/tjwVGqv5h0

Of course, “human rights” no longer includes things like freedom of speech, freedom of religion, or due process, all of which journofa seem to associate with “Nazis.”

Yet let’s be fair. O’Rourke’s open totalitarianism was too much even for the MSM, which almost unanimously decried O’Rourke’s plan as blatantly unconstitutional or simply wild.

Of course, it’s not “apocalyptic” if there really are people out to get you. Pat Buchanan has long predicted civil disobedience from committed Christians (and, presumably, other faith groups) on this issue. The LA Times’ McGough and others just seem frustrated because O’Rourke is saying too much, too quickly; they’d rather see the conservative boiling frogs lulled into a false sense of security rather than leaping out of danger.

We at VDARE.com have no such illusions. Journalists are already coming for us brandishing their knives. The New York Times has already featured law professors arguing that “white supremacist” groups (meaning anyone they don’t like) should have their tax-exempt status revoked because of their “odiousness.” They base this claim on the ill-conceived and unanimous declaration against “white nationalism” the majority-GOP Congress pushed through after the Democrat-sponsored riot in Charlottesville in 2017. To them, this constitutes proof that white advocacy is counter to public policy. The New York Times did not allow VDARE.com’s Peter Brimelow and American Renaissance’s Jared Taylor a full response to the charge of “white supremacy,” only grudgingly printing a Letter To The Editor.

In fact, these same two professors, Samuel Brunson and David Herzig, had also made the explicit argument that this approach can be used against religious institutions that “discriminate” [A Diachronic Approach to Bob Jones: Religious Tax Exemptions after Obergefell, Indiana Law Journal, February 3, 2017].

National Review’s editors claimed “Beto Proposes to Oppress Church with State” [October 11, 2019]. Well, like it or not boys, you’re in the same trench as us. Ben Shapiro went full-on fedposting, saying he’d meet O’Rourke with a gun if he tried to force his child into “LGBQ indoctrination.” (As a moderate conservative, I disavow such rhetoric.)

That got publicity, but many reporters overlooked that Shapiro also said he might leave the country. Easy for him to say, he has somewhere to go. What about us?

[I]f the IRS were to begin revoking groups’ tax exemptions based on their exercise of speech that is not protected, such as libel or incitement of immediate criminal conduct, it would be obliged to apply such a policy neutrally as to content — which means a lot of groups quite different from the one targeted in the test-case controversy will find their ox gored. The legal precedents have developed in cases involving a wide range of both progressive and conservative litigants, and understandably so, because if principles in this area are to be principles, they must protect speakers of many different points of view, not just the popular or emollient. Either that, or they will in effect protect none.

As The Week’s Bonnie Kristian noted, despite the applause from the audience at the debate, “Beto’s” proposed policy would have effects not “limited to white, Republican Protestants” because it would also affect black churches and perhaps even “some of the very gay Americans whom O’Rourke purports to protect” [Why Beto O’Rourke’s gay marriage idea collapses under scrutiny, October 11, 2019].

Reason added that “viewpoint discrimination” is a dangerous tool because it’s already been used against homosexual groups, the same people who now want to wield it [The legal-historical amnesia of using tax exemptions to punish political beliefs, by Dale Carpenter, October 11, 2019].

These are solid, well-grounded arguments made in good faith. They are also irrelevant. They are examples of what I call the “what, not who” fallacy. They presuppose that the law will be equally applied. However, in today’s system, “Who? Whom?” are the only questions that matter.

There’s no question that on present course America’s increasingly Third World courts will simply eventually declare that because of the inherent evil of whiteness, certain groups must be stripped of legal protection. We’re already operating in a post-legal environment, where the letter of the law and constitutional guarantees are irrelevant. Judges can simply create policy out of whatever they want.

Already, if the ban on explicitly political activity was enforced against black churches, Democratic Get-Out-The-Vote efforts would be gutted. At the same time the Obama Administration was selectively targeting Tea Party groups, it coached the Conference of National Black Churches on how to be politically active and keep their tax exemption.

Many churches have simply become tax shelters for far-Left causes, having long abandoned actual religious belief. This often includes sheltering illegal immigrants. One  naïve, pro-immigration American was killed by an illegal immigrant who was charged with “careless driving resulting in death” and driving with a revoked license [Colorado immigration advocate killed in crash with Salvadoran who once sought sanctuary in church: report, by Lucia Sang, Fox News, August 9, 2019].  He had previously been sheltered by the Unitarians.

Everyone reading this, from the Leftist vigilantes monitoring us to the most stalwart patriot, knows that the law simply does not apply to some people. If it did, we wouldn’t have an illegal immigration crisis.

Until the entire system is changed, the best we can do in this environment is fight for the constitutional guarantees we still have. Mainstream and religious conservatives who normally virtue-signal against us have a stake in our fight, whether they like it or not.

We are the shield that is guarding religious conservatives from IRS action. If they think they will be permitted to make a separate peace, Beto O’Rourke just told them they are sadly mistaken.