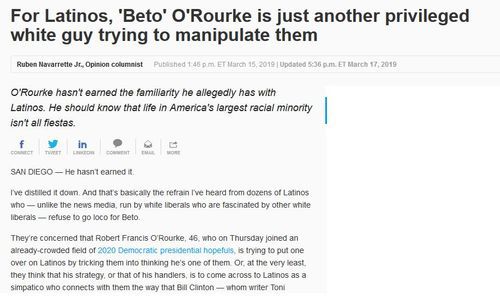 It's hard to know who to root against on this one. Maybe just sit back and watch.

I refer to professional Hispanic Pontificator Ruben Navarette, of whom we've written much at VDARE.COM through the years (see here) who is taking on Beto O'Rourke, accusing him of "stolen valor" for using a Spanish nickname and trying to pass himself off as Hispanic.

Stolen valor, for a nickname?

The Navarette column is entitled For Latinos, 'Beto' O'Rourke is just another privileged white guy trying to manipulate them [USA Today, March 15, 2019] and it just goes downhill from there:

He hasn’t earned it.

I’ve distilled it down. And that’s basically the refrain I’ve heard from dozens of Latinos who — unlike the news media, run by white liberals who are fascinated by other white liberals — refuse to go loco for Beto.

There you go. Navarette has talked to "dozens of Latinos" who "refuse to go loco for Beto" and concludes that Beto "hasn't earned it".

I'm not for Beto either, but not for the same reasons.

They’re concerned that Robert Francis O’Rourke, 46, who on Thursday [March 14] joined an already-crowded field of 2020 Democratic presidential hopefuls, is trying to put one over on Latinos by tricking them into thinking he’s one of them. Or, at the very least, they think that his strategy, or that of his handlers, is to come across to Latinos as a simpatico who connects with them the way that Bill Clinton — whom writer Toni Morrison mischievously dubbed “our first black president” — connected with African-Americans. At least until Barack Obama came along, and the Clinton machine tried, and failed, to destroy him.

So is that the deal? Is O’Rourke aiming to become America’s first Latino president?

No. Navarette will have none of that.

Now Navarette is ready to tell us what "actual Latinos" have to say.

What actual Latinos tell me is that they resent the presumptuousness of this supposed familiarity we’re told Beto feels with a community that he has done, at best, a mediocre job of representing when he had the chance.

Note that Latinos are a "community" that must be represented. And Navarette doesn't mean representing an electoral district, he means representing Latinos as Latinos. So does that mean that Latinos have different interests from those of other Americans?

For instance, at a time when Latinos feel under siege by ethnocentrism and anti-immigrant demagoguery, where was O’Rourke on the explosive immigration issue during his three terms in the House of Representatives? Judging from the comments by lawmakers who served with him, it appears he was in hiding. But hey, let’s cut the guy some slack for going AWOL when Latinos needed him. O’Rourke hails from the border city of El Paso, Texas. Where would anyone encounter immigrants in a place like that? The Democrat is also criticized for not reaching out to Latino voters in Texas during his Senate race last year against incumbent Ted Cruz, perhaps thinking he had them in the bag and so he could take them for granted.

Now Navarette is ready to quote some of these "actual Latinos" who have rejected Beto.

One Mexican-American professor who teaches at a university in San Diego, echoing a critique leveled by Cruz and many others, was bothered that the politician called himself "Beto." He said it seems O'Rourke is taking advantage of his nickname to pretend to be something he’s not.

Another professor and lawyer, who is Panamanian-American, said O'Rourke hasn't lived the life of a Hispanic man. As a white male, his life was easier (as he himself acknowledges). And it still is.

A Mexican-American woman who works in public relations told me O'Rourke seems condescending. Given his privilege, it is irritating that he seems to pretend that he knows and understands what bothers a demographic he’s not part of.

The Beto backlash reminds of the idea of stolen valor, the righteous outrage felt by combat veterans when others who didn’t see action claim medals they don’t deserve. You see, being a member of America’s largest minority — especially in the Trump era — isn’t all fiestas and churros. And if you haven’t had your ticket punched, you don’t get to take the ride.

Oh, and who is in charge of the ticket punching. Who determines who is an authentic Latino who has has had his "ticket punched"? I guess it's Navarette. Now, about the Beto nickname:

Now let’s deal with this business about the name. Who, or what, gave birth to the legend of Beto?

Robert Francis prefers to be called by that name, and he and his army of supporters — the Beto bots — swear it has nothing to do with politics. They even point to the fact that O’Rourke seems to have first gotten tagged with the moniker when he was a child, showing off a photo of him as a boy wearing a sweatshirt with the name “Beto” on it.

What they appear not as eager to talk about, however, is the fact that Patrick O’Rourke — Robert Francis’ father — once explained that he was the one who gave his son the nickname in the first place and the reason had a lot to do with politics, as well as geography. According to The Dallas Morning News, the patriarch reasoned that if his son ever ran for office in El Paso, the odds of being elected in that largely Mexican-American city were far greater with a name like Beto.

When told of his father’s words, O’Rourke shrugged them off, calling his father “farsighted.”

I’d use different words, like cynical and dishonest and manipulative.

So Patrick O'Rourke called his son "Beto" so his son could run for office and pander to Latinos? Sounds like he was really planning ahead.

Or you could look at it as a form of assimilation, with Americans assimilating to Latino culture. Like Jeb Bush registering himself as Hispanic.

Shouldn't Navarette, who has declared the Hispanicization of the United States as inevitable (see here) be pleased?

It's certainly not respectful to assume people can be so easily fooled. And, as any real Latino can tell you, respect goes a long way in our community. O’Rourke should take the time to get to know us better. If he did, more Latinos might have a better impression of him.