By Jared Taylor and Peter Brimelow 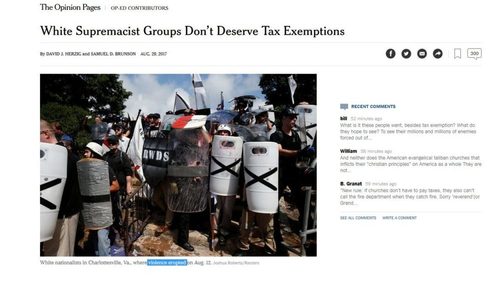 In their August 29 op-ed, law professors David J. Herzig [Email him] and Samuel D. Brunson  [Email him]  argue that the IRS should revoke the tax-exempt status of our organizations, New Century Foundation (NCF) and VDARE Foundation. Most of their article is name-calling: They claim that we are “white supremacists” and “racists,” who promote “despicable views,” and that NCF conferences attract “neo-Nazis, white supremacists, Ku Klux Klan members, Holocaust deniers, and eugenicists.”

Anyone who has actually read our material or attended our conferences will laugh at this overwrought language, and, indeed, the sole quotation from either organization that the authors claim proves “white supremacy”—from NCF’s statement of purpose—does nothing of the kind: “We also believe the European-American majority has legitimate group interests now being ignored.” Would this statement be “supremacist” if it were about Hispanics or blacks?

The authors claim that we promote “viewpoints [that] are fundamentally untethered from American values” and that violate “fundamental public policy.” Anyone who uses words such as “neo-Nazi,” “supremacist,” or “Ku Klux Klan” in connection with the work of our foundations has obviously not tried to understand our viewpoints, and is therefore not qualified to judge them. The VDARE Foundation, for example, focuses on immigration and has long supported policies very close to those on which President Trump ran—and won. Do the authors think President Trump and his 63 million voters are “white supremacists”?

The authors cite the Supreme Court’s 1983 decision to revoke tax exemption for Bob Jones University as precedent for revoking ours. However, Bob Jones was engaging in conduct that the Court found to be racially discriminatory. We are not engaging in any such conduct; we are exercising the right of free speech. The IRS lacks statutory authority to withdraw a tax exemption based on educational activates, and it would violate the First Amendment if it were to try.

Even the authors of the op-ed would surely concede that we do not promote violence or illegal behavior. Therefore, even if all the hair-raising things they say about us were true—and they are not—revoking our exemptions would be unconstitutional discrimination based on viewpoint.

The authors’ proposal comes on the heels of a concerted effort by giant internet companies to “deplatform” websites that promote views with which they disagree. Both NCF and VDARE Foundation have been cut off by Amazon Affiliates, PayPal, and MailChimp. Facebook suspended NCF’s account and YouTube put one of its videos into formal quarantine.

Some internet companies are now so big that they are, in effect, utilities. One could argue that they have a public duty not to refuse service except to users who violate obscenity, incitement, or defamation laws. If Google or Facebook can cut off law-abiding users—strictly based on viewpoint—why shouldn’t the electric company have the same right?

Now, David Herzig and Samuel Brunson want to enlist the IRS as part of a public-private effort to make it as difficult as possible to promote certain points of view. While NCF and VDARE do not agree on all issues, we believe that both our foundations are an important part of the debate about the demographic future of the United States. In fact, we are dismayed that there is essentially no debate on this vital question.

We already live in an era in which “controversial” people are violently prevented from speaking at universities, and internet companies try to silence dissidents. The authors of the op-ed clearly want the United States government to join in this shameful effort to curtail debate.

Post
We Call This Treason: Mayorkas Admits 12,000+ Illegal Aliens Released in USA—After Promising They Would be Repatriated

Post
Goldman Sachs/Ozy Scam: If This Isn't Proof Of White Privilege, I Don't Know What Is