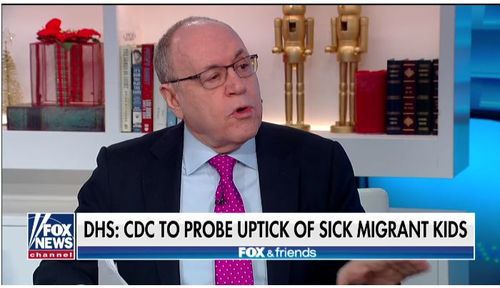 Sick Migrant Kids Get Lots Of Media Attention; US Public Health, Not So Much

Public health is a topic that gets little attention these days except for warnings about self-inflicted problems like obesity and alcoholism. The danger from infectious disease may seem like a distant memory or a Third World trouble. But now, open borders threaten all Americans with communicable illnesses once thought defeated by modern medical science.

The United States is becoming the Third World as it fills with its people and problems. Open borders are an invitation to billions of humans on earth.

There has been huge outrage in the liberal press about the deaths in the last month of two illegal alien kids while in US government custody. Democrat Presidential wanna-be Beto O’Rourke remarked on the situation, “I want to make sure that we put the well-being and welfare of those kids before any other concern.”

What about the well-being of American kids who are your constituents, Congressman O’Rourke?

America is not the welfare office for the world — it’s our home.

Dr. Marc Siegel discussed the problem of public health under siege during a recent interview on Fox News:

DR. MARC SIEGEL: Just in the last month alone: 5,000 unaccompanied children crossing the border illegally and 25,000 families. Well guess what — they have health problems. I mean, what’s going on in the camps down in Mexico — there’s flu around right now. I looked up flu in Mexico, there’s an upsurge of flu right now; there’s respiratory infections; there’s strep throats going on; there is mosquito-borne diseases that we see; dengue fever; there’s a risk of tuberculosis; there’s hepatitis. All this going on and we’re not screening, we’re not able to screen the people coming in, no matter how much the authorities try, no matter how much CDC now gets involved and also the US Coast Guard Med Corp was sent down there. That’s going to be an enormous help. It’s a humanitarian crisis because we can’t control the amount of people coming in.

KATIE PAVLICH: Doctor, the suggestion is that you have any concerns about the diseases that could be brought into United States by an unvetted caravan, that you’re bigoted, you’re not empathetic, but are these very serious health issues that everybody should be concerned about no matter what country you live in?

DR. SIEGEL: Well you’re talking to a physician here, and I don’t look at it politically. I say flu, let’s start with flu season. These are unvaccinated people; I say let’s try to vaccinate them. I’m not on TV saying let’s vaccinated everyone in the United States, but nobody’s vaccinated at the border, so they’re gonna spread influenza right now, they’re gonna spread respiratory infections, again the other the other diseases I mentioned. I think it’s a humanitarian crisis, but these are contagious diseases as well as other health problems that our hospitals aren’t equipped to deal with.

Now the eight-year-old boy was sent out from a New Mexico hospital with what I think was probably the flu — that’s the hospital’s fault, and Border Patrol is getting a lot of heat for that. They’re not physicians, and they have 1500 EMTs, emergency medical technicians, working for the Border Patrol that are there to screen people and get them to hospitals, but then the hospitals have to have the ability to take take care of them.

PETE HEGSETH: But all of it’s politicized, so this this young boy dies which we all agree is a tragedy and suddenly it’s it’s the policy of the United States. How do we get past that?

DR. SIEGEL: I think we get past that by talking about it right now just like this — that it’s actually a health crisis, it’s not a political crisis, and if you were to look at it politically you’d have to say that the United States has a long history of screening people. I can show you pictures from Ellis Island two hundred years ago where we’re looking for tuberculosis; doctors that didn’t even know what to do with it. Now we have the medical ability to treat these diseases, but we have to have the the physicians and the nurses in place to do so.

It’s a humanitarian crisis. It’s a disgrace to actually blame this on the Customs and Border Protection. What do they have to do with it? They’re doing tremendous work down there.

PAVLICH: The Department of Homeland Security is also been pressuring Mexico to start screening inside of their shelters, but can you talk a little bit about that?

DR. SIEGEL: Okay, because I don’t think we know what’s going on there.

PAVLICH: I don’t think we do, but can you talk a little bit about how disease can spread more rampantly when you have a large group of people who aren’t in the best sanitary conditions that we’ve seen in Tijuana, the shelters in Mexico as you just said, we don’t know exactly what’s going on. The shelters in the United States are far superior to the ones that they’re stopping in along the way whether it’s in tents or something else, so does make this situation worse?

DR. SIEGEL: So you just handled the medical side very well, definitely. I actually think that that’s what it is — it’s that they’re going from one camp to the next, we can’t track people, that they’re huddled close together, that there’s not proper hygiene. If you look inside of one of these stations, you see water, you see food, you see bedding, but not a lot of sanitation and not a lot of concern about it infectious disease.

Guess what happens — a cough travels 12 feet. If you have the flu, 25 percent of the people that you encounter get the flu. People are misdiagnosing these problems. Contagions will spread like wildfire in situations where there’s people huddled close together, especially if there’s heat there. We need more medical attention to this, not more political.