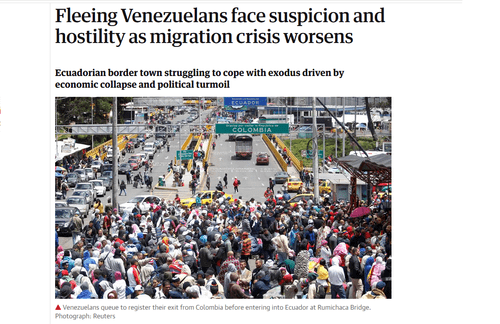 In Rules for Radicals, Saul Alinsky declares, "One's concern with the ethics of means and ends varies inversely with one's personal interest in the issue." This is especially true when it comes to immigration. It's very easy to virtue signal about the need to accept an unlimited number of refugees when you aren't the one paying for it or being forced to live with them. It's quite another thing when it is happening in your backyard.

Now, because of the massive amount of Failure Migration taking place because of the collapse of Venezuela, many of the Latin American countries that fiercely opposed immigration control measures in the United States are now defending their own borders.

Monica Showalter notes in The American Thinker that the same countries who sued Arizona over Prop 200 are now far more restrictionist than anything seen in the American southwest.

Remember how Arizona Governor Jan Brewer got piled on by 17 Latin American nations in 2010, condemning her state for attempting to enforce federal immigration law based on the reality that Arizona was being overrun by illegals and the Obama administration was doing nothing? It was bad enough that the Obama administration sued her state to end the law, something it only did with partial success. But then Latin states such as Brazil, Colombia, Peru, and Ecuador joined the fun, piously weighing in to sign on to a highly questionable Friend of the Court brief led by Mexico, condemning Arizona for trying to enforce U.S. immigration law...

Ecuador has announced that anyone entering its country is going to need a passport. No more entries without papers, given that 500,000 of them have already gotten in. "This is going to skyrocket," said one Ecuadoran official. After that, Peru, which just recently saw 5,000 Venezuelan border crossings without papers in one day, announced the same bid to enforce borders. It follows from Colombia tightening its passport requirements, and both Colombia and Brazil just plain sealing their borders to make the human waves stop. Chile, too, tightened entry rules after it got flooded. The latest news is that Brazil is now deploying troops to fight the migrants.

Comically, Colombia, which has pretty much let all comers in and expected them to fan out across the continent, says it is upset about Peru's and Ecuador's new passport requirements, because, well, they now get to keep the million or so people who had been ready to move onward...It probably doesn't help that a Colombian judge recently ruled that the incomers were fully entitled to the benefits of Colombia's vast health care system without having paid anything in.

[Remember how Brazil, Ecuador, and Peru condemned Arizona over illegal immigration in 2010, August 19, 2018]

There are common themes we find in each one of these mass immigration catastrophes.

We have emigration from a failed society both imposing costs on neighboring countries and reducing incentives on the indigenous ruling class to change behavior.

We have a rise in immigration restrictionism in direct proportion to how much it affects each particular country.

We have each country trying to pass the migrants onto their neighbors, much like the European Union and Angela Merkel always urge a "collective" response to immigration. Of course, this is an implict acknowledgement migrants are a cost, not a source of strength.

Finally, we have judges ruling that random immigrants suddenly are entitled to massive welfare benefits in their new country, which of course increases the incentives for migration.

It also hastens the collapse of domestic social welfare institutions, which creates more political radicalism and demands for redistribution of wealth, which then creates another wave of failure migration.

More broadly, we then have the destruction of advanced successful countries because of the importation of people from less successful societies. The end result is that there end up being no successful countries at all [Argentina: A Mirror of your future, by Gustavo Semeria, American Renaissance, April 14, 2017]

Mass immigration is usually both the result of catastrophe and a catastrophe in itself. The world can't continue like this.