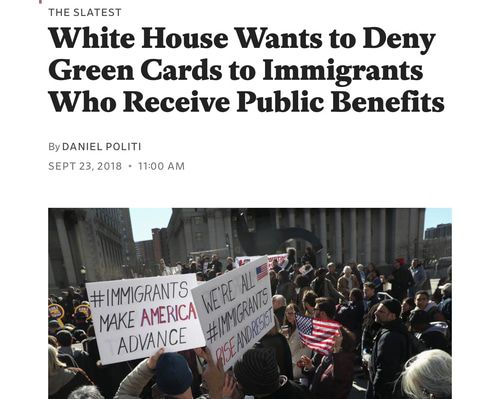 There's been a spate of articles in recent days complaining that the Trump Administration is moving to prevent welfare recipients from obtaining green cards. We are in one of those Narrative Shift moments.

It seems just yesterday that the Left was arguing that immigrants don't use welfare [Immigrants Don't Drain Welfare. They Fund It. by Laura Reston, The New Republic, September 3, 2015]

Now, we are being told they do use welfare. In fact, they desperately need it, and you are a monster if you think there's a problem with this.

A typical passage from Slate:

Immigrant advocates immediately raised concern that even mentioning the proposed new rule could push low-income immigrants to avoid requesting public benefits out of fear that it could jeopardize their chances of receiving a green card in the future. Although the move shouldn’t affect those who already have green cards, advocates are also concerned they will stop using public benefits to be on the safe side. And those who would most likely be affected would be children of immigrants who are in the United States legally.

“This would force families—including citizen children—to choose between getting the help they need and remaining in their communities,” said Diane Yentel, president of the National Low Income Housing Coalition. “The last thing the federal government should do is punish families that have fallen on hard times for feeding their children or keeping a roof over their heads and avoiding homelessness.”

Of course, the "citizen children" should not be citizens at all, and the most important step that needs to be taken is repealing birthright citizenship. Yet leaving that aside, why are welfare recipients even considered for green cards? After all, being a "public charge" was historically one of the reasons used to exclude potential immigrants.

Even National Review, which has cucked hard on birthright citizenship, thinks this is a bridge too far.

Special cases such as refugees aside, there is no reason whatsoever for the U.S. to welcome immigrants who cannot support themselves without taxpayer subsidies. Current policy does a horrible job of implementing this principle, and therefore we endorse the Trump administration’s new effort to tighten the policy up...

Our laws say that immigrants are ineligible for visas and green cards if they are likely to become dependent on the safety net funded by U.S. taxpayers. It’s time to start enforcing that policy.

[Immigrants should support themselves, by The Editors, September 24 2018]

The indispensable Daniel Horowitz at Conservative Review forcefully argued last month that even the idea of immigrants receiving welfare would have been horrifying to the Founding Fathers.

Immigration is an elective policy of a sovereign nation. It should benefit America and never create a public charge. That notion is one of the most foundational principles of our country. It dates back to colonial times and has been enforced by the states since the founding and then by the federal government when it fully reclaimed immigration in the 1880s. That immigrants shouldn’t be a public charge is still the law on the books, yet it’s rarely enforced. Now that the Trump administration is seeking to enforce the law, suddenly the Left is screaming about denying immigrants their rightful citizenship...

It’s quite entertaining to watch the open-borders crowd go from explaining how these are the most prosperous immigrants of all time to telling us that the proposal would dramatically cut immigration. Obviously, this is an admission that for decades they have been lying to us about the nature of many of the immigrants coming to the country and just how many of them receive welfare.

Immigration has rocketed up to the top issue on the minds of voters this cycle. There are so many winning messages Republicans can disseminate for the next 100 days on stopping the fleecing of America.

[Welfare for immigrants is alien to our laws, history, and traditions, August 8, 2018]