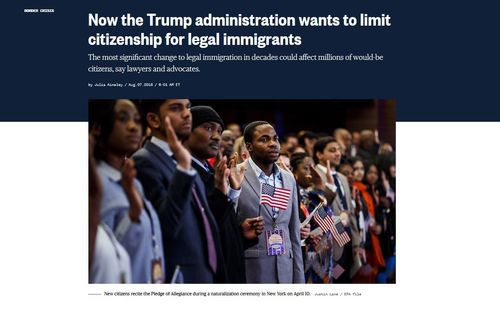 There’s a lot a sitting administration can do just by enforcing laws that are  already on the books. Like the public charge law.

Whatever one thinks about it, at least welfare for citizens is for American citizens.

As for welfare for non-citizens and naturalized immigrants, you have to ask, why are we selecting immigrants who go on the dole?

Well, the Trump Administration is about to do something about that.

The Trump administration is expected to issue a proposal in coming weeks that would make it harder for legal immigrants to become citizens or get green cards if they have ever used a range of popular public welfare programs, including Obamacare, four sources with knowledge of the plan told NBC News. The move, which would not need congressional approval, is part of White House senior adviser Stephen Miller's plan to limit the number of migrants who obtain legal status in the U.S. each year.

Stephen Miller, remember, is the one who schooled Jim Acosta on the Statue of Liberty. See Has Stephen Miller Been Reading VDARE.Com?

Details of the rulemaking proposal are still being finalized, but based on a recent draft seen last week and described to NBC News, immigrants living legally in the U.S. who have ever used or whose household members have ever used Obamacare, children's health insurance, food stamps and other benefits could be hindered from obtaining legal status in the U.S. Immigration lawyers and advocates and public health researchers say it would be the biggest change to the legal immigration system in decades and estimate that more than 20 million immigrants could be affected. They say it would fall particularly hard on immigrants working jobs that don't pay enough to support their families.

Aren’t we constantly lectured that immigrants come here to work and not to get on welfare? But these immigration lawyers and activists and reasearchers “estimate that more than 20 million immigrants could be affected.”

A spokeswoman for the Department of Homeland Security said: "The administration is committed to enforcing existing immigration law, which is clearly intended to protect the American taxpayer by ensuring that foreign nationals seeking to enter or remain in the U.S are self-sufficient. Any proposed changes would ensure that the government takes the responsibility of being good stewards of taxpayer funds seriously and adjudicates immigration benefit requests in accordance with the law." Miller, along with several of his former congressional colleagues who now hold prominent positions in the Trump administration, have long sought to decrease the number of immigrants who obtain legal status in the U.S. each year. And even before the rule is in place, the administration has made it more difficult for immigrants to gain green cards and for green-card holders to gain citizenship.

The article reports that the Trump Administration has already reduced the quantity of immigrants receiving green cards by 20% just by being stricter with existing immigration law. This has mostly gone on under the radar, and hasn’t even required congressional participation.

In fiscal year 2016, the last full fiscal year under the Obama administration, 1.2 million immigrants became lawful permanent residents, or green-card holders, and 753,060 became naturalized U.S. citizens, according to data from U.S. Citizenship and Immigration Services. Data from the first quarter of fiscal year 2018 indicates that the administration is on track for a decline in immigrants granted green cards by 20 percent. Data for the first two quarters of fiscal year 2018 for immigrants obtaining naturalized citizenship shows little change compared to the same period of 2016. U.S. Citizenship and Immigration Services says they expect naturalization numbers to rise in the latter half of the year based on previous trends.

The NBC article quotes immigration lawyers who have of course taken note of this.

Four immigration lawyers practicing in Massachusetts, Virginia, Tennessee and California told NBC News they have noticed a spike in the number of their clients being rejected when seeking green cards and naturalized citizenship.

In the latter part of the article, where some readers may not even arrive, the legal concept of a “public charge” is finally mentioned. In other words, the Trump Administration wants to enforce the law that is already on the books.

Though its effects could be far-reaching, the proposal to limit citizenship to immigrants who have not used public assistance does not appear to need congressional approval. As the Clinton administration did in 1999, the Trump administration would be redefining the term "public charge," which first emerged in immigration law in the 1800s in order to shield the U.S. from burdening too many immigrants who could not contribute to society.

Actually, the public charge concept has been a part of American law since the 1600s. It’s today’s mass immigration meets the welfare state that’s the big anomaly.

As on so many other issues, VDARE.COM has been way ahead of the game on the public charge issue. See this article from way back in 2001: Whatever Happened To Deporting Immigrants As a Public Charge? So consider donating to VDARE.COM, here. Things we’ve been writing about for years are finally in the public discourse and we need to keep up the pressure.

Rosemary Jenks, executive vice president of NumbersUSA, which promotes limited immigration, said the new rule and the increased scrutiny around green card and citizenship applications are all part of a new focus at DHS on enforcing the law and preventing fraud. "Applications for renewal or adjustment of status that have been filed with the government before are being re-examined to look for fraud," Jenks said.

Yes, fraud, that’s another all-too-common aspect of our immigration system. And the Trump Administration is doing something about it, and immigration lawyers are taking note.

In light of this, immigration attorneys are cautioning their clients before moving from green-card status to citizenship. Rose Hernandez is the supervising attorney at the Tennessee Immigrant and Refugee Rights Coalition's naturalization clinic. She said the clinic's model has completely changed in light of the crackdown. She now sends six information requests to government agencies to check on green-card holders' backgrounds before she advises them to file for citizenship. If the government finds something she doesn't, the fear is the applicants could lose their green cards and be sent home.

Of course, immigration lawyers don’t want public charge law enforced. But then they wouldn’t, would they?

And other immigration attorneys are preparing to push back fiercely against the public charge rule.

"Any policy forcing millions of families to choose between the denial of status and food or health care would exacerbate serious problems such as hunger, unmet health needs, child poverty and homelessness, with lasting consequences for families' wellbeing and long-term success and community prosperity," said the National Immigration Law Center in a statement.

So how is it fair to American taxpayer/citizens to import millions of immigrants who go on the dole?

Why are we selecting immigrants who go on welfare?