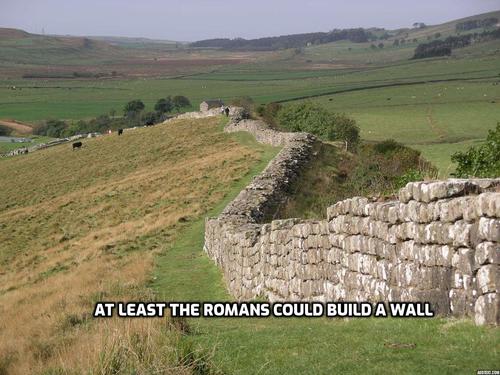 See, earlier: "Actually, There Has Always Been Migration"—But In Those Days They Called It Invading!

Can we have a quick reality check and acknowledge that what is happening to America is a million times worse than what's happening in Europe and is of much greater consequence?

Conservatives regularly point to the mass migration afflicting Europe as if it's the Ghost of Christmas Future for America. Since waves of Third World migrants began sweeping into the European Union, we've seen terrorism, knifings, rape gangs and riots popping up all over the birthplace of Western civilization. Sweden has gone from a country where rape was essentially nonexistent to the Rape Capital of the World.

It's sweet of Americans to be so concerned about Europe, but maybe they should look at their own country. On account of a mass immigration policy imposed on us by our government, the United States has undergone a transformation unprecedented in all of world history.

From 1620 to 1970, the U.S. was demographically stable—not to be confused with "a nation of immigrants." The country was about 85% to 90% white, almost entirely British, German, French and Dutch, and 10% to 15% African American. (The American Indian population, technically in their own nations, steadily plummeted—an example of how vast numbers of new people can displace the old, both accidentally and on purpose.)

In a generation, the white majority has nearly disappeared, while the black percentage has remained about the same, with more than 90% of African Americans still native-born. White Americans are one border surge away from becoming a minority in their own country.

In 2016, non-Hispanic whites were 61.3% of the population and 54% of all births. That was two years ago, before Trump came in and flung open the border to all of Latin America, especially children and pregnant ladies hoping to have an anchor baby.

Back in 1995, the Census Bureau estimated that whites would decline to about 64% of the population by 2020. Today, the Census Bureau projects the nation will be less than 60% white by then. We’re moving faster than even La Raza could have hoped!

This isn't about race—though it might be of some concern to the rapidly diminishing white population that our cultural overlords are so tormented by "whiteness."

This stunning demographic replacement matters because American culture is the envy of the world. Not only was this wonderful culture created by white Western Europeans, but merely asking immigrants to assimilate to it is generally considered a hate crime.

If everyone assimilated to our culture, who cares what race they are? But given sufficient numbers, they don't. They don't need to, and we certainly aren’t asking them to. The reason we successfully assimilated not-so-different European cultures was that we controlled the numbers—essentially stopping immigration for 50 years while we forged an American character.

What we're witnessing in Europe is that continent's first brush with the joys of diversity.

When did it become deplorable, Walmart-y behavior to care about your own country? Not to care more, but merely to care as much as you do about the rest of the world?

It seems as if progress is inevitable, that things always get better and never retrogress. But the Roman Empire had philosophers, literature, science, great buildings, statues and works of art. It had advanced communication, plumbing and transportation systems. It had a universal set of measures, laws and rules.

And then the Dark Ages came. In the blink of an eye, all that was lost. The people no longer had the technological know-how even to repair bridges and aqueducts built by the Romans. They had lost the ability to make cement. They lost many of the works of Aristotle. Roads and plumbing fell into disrepair. Statues crumbled. Nikki Haley would be happy!

Only centuries later did civilization begin to reassert itself, barely climbing back to the accomplishments of several centuries earlier.

Whatever the causes of the fall of the Roman Empire, one thing is for damn sure: There were not vast bands of powerful Romans prattling about "Roman privilege," demanding that the Huns be given preference over Romans and writing articles with titles like "Abolish the Romans!"

That is the driving impulse of one of our two major political parties. The other party can't bestir itself to care about anything other than tax cuts, abortion and moving our embassy to Jerusalem.