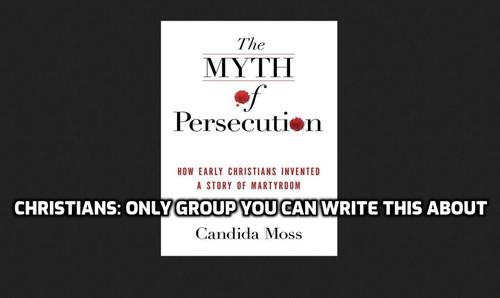 Christians And The "Myth Of Persecution" : The ONLY Group You Can Write That About 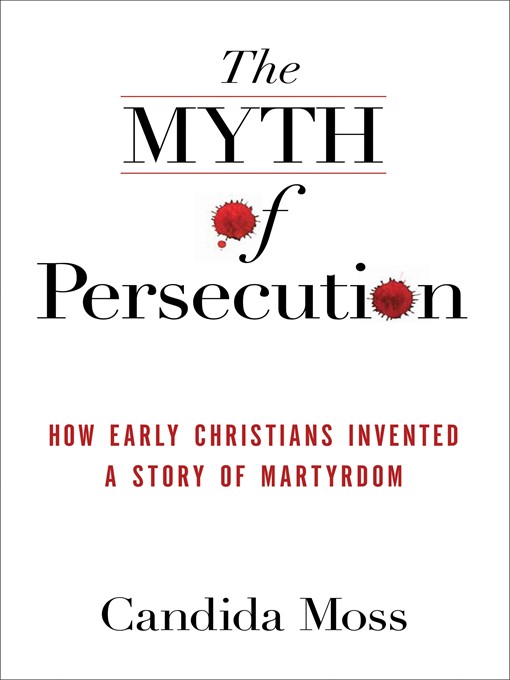 Professor Candida Moss [Email |Twitter] has written a book about Christians (published 2013) called The Myth Of Persecution. She's not calling modern day Christophobia (War on Christmas, etc.) a myth. She's not calling the international persecution of Christians by Muslims a myth, either. She's calling the persecutions in the Bible like the stoning to death of St. Stephen  (Acts of the Apostles) and the Catholic history of martyrs (The Roman Martyrology) a myth.

I'll present her thesis below, and say that I don't know how much of the Acts and the Martyrology are true of exaggerated, but I do know that Christians are the only group in modern society about whom you can safely write a book called "The Myth Of Persecution".

Furthermore, the allegation is that the early Christians exaggerated their earlier persecutions after they achieved power.

In The Myth of Persecution, Candida Moss, a leading expert on early Christianity, reveals how the early church exaggerated, invented, and forged stories of Christian martyrs and how the dangerous legacy of a martyrdom complex is employed today to silence dissent and galvanize a new generation of culture warriors.

According to cherished church tradition and popular belief, before the Emperor Constantine made Christianity legal in the fourth century, early Christians were systematically persecuted by a brutal Roman Empire intent on their destruction. As the story goes, vast numbers of believers were thrown to the lions, tortured, or burned alive because they refused to renounce Christ. These saints, Christianity's inspirational heroes, are still venerated today.

Moss, however, exposes that the "Age of Martyrs" is a fiction—there was no sustained 300-year-long effort by the Romans to persecute Christians. Instead, these stories were pious exaggerations; highly stylized rewritings of Jewish, Greek, and Roman noble death traditions; and even forgeries designed to marginalize heretics, inspire the faithful, and fund churches.

The traditional story of persecution is still taught in Sunday school classes, celebrated in sermons, and employed by church leaders, politicians, and media pundits who insist that Christians were—and always will be—persecuted by a hostile, secular world. While violence against Christians does occur in select parts of the world today, the rhetoric of persecution is both misleading and rooted in an inaccurate history of the early church. Moss urges modern Christians to abandon the conspiratorial assumption that the world is out to get Christians and, rather, embrace the consolation, moral instruction, and spiritual guidance that these martyrdom stories provide.