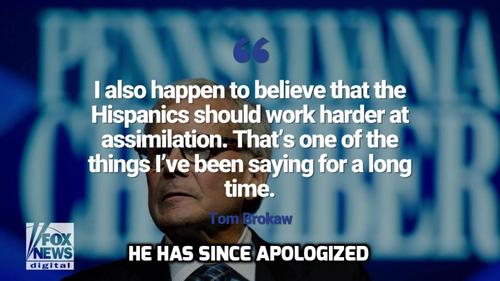 VDARE Radio: Tom Brokaw And The End Of Assimilation

Tom Brokaw is about an Establishment figure as you can get. He provided a hagiographic glow around World War II with his book The Greatest Generation and is representative of a type—the liberal, nostalgic, Baby Boomer Democrat that wants to take the country leftward at a leisurely pace. Needless to say, he’s also a huge proponent of more immigration. [Tom Brokaw, pro-illegal immigration hack , 24Ahead, December 26, 2006]

However, today Tom Brokaw finds himself the latest prominent figure being subjected to an outrage cycle from the Main Stream Media. He’s denounced as a racist, a bigot, and a xenophobe. His crime? In a recent interview, he suggested Hispanics should speak English.

I also happen to believe that the Hispanics should work harder at assimilation. That’s one of the things I’ve been saying for a long time. You know, they ought not to be just codified in their communities but make sure that all their kids are learning to speak English, and that they feel comfortable in the communities. And that’s going to take outreach on both sides, frankly.

Well, it appears Hispanics don’t want outreach. Brokaw was blasted for suggesting that Hispanics should learn English. Instead, we are told, Americans should learn Spanish.

Thousands of people agreed with these sentiments. This isn’t the language of assimilation or even immigration. It is the language of conquest. The message here is that Americans are to be displaced in their own country and that they are not allowed to resist it.

In fact, even voicing the sentiment that people in this country should speak English can cost you your career. Lawyer Aaron Schlossberg had the national media descend on him when he said restaurant workers should speak English to customers. The same thing happened to a random woman in a Walmart who wanted Hmong to speak English while in America. Another professor. just had her career ended because she suggested international students should speak English [Duke University professor removed over ‘Speak English’ email, by Helier Cheung, CNN, January 28, 2019] Each one of these rather petty incidents becomes national news, and journalists do their best to ruin the person caught in the center.

Obviously, if we can’t even speak the same language, it’s useless to speak of Americans as sharing one national identity. What is even more frustrating where Republicans dropped the ball when they had a majority in both the House and Senate. Establishing English as the national language is a common sense policy that for some insane reason, the GOP sees fit to ignore every time it has the chance to do something. It’s especially remarkable since President Donald Trump made it an issue in the campaign, famously lecturing Jeb Bush during a debate, “We speak English here, not Spanish.”

It would also be a sign that America is here to stay and isn’t just a landmass that is going to be conquered by the Third World.

I suspect most people, Republicans and Democrats, want America to stay an English-speaking country. President Trump looks like he could use a victory, and an issue. Why not take this up? And let the radical leftists and the journalists explain why having one language that Americans of all races can speak is somehow “racist.”