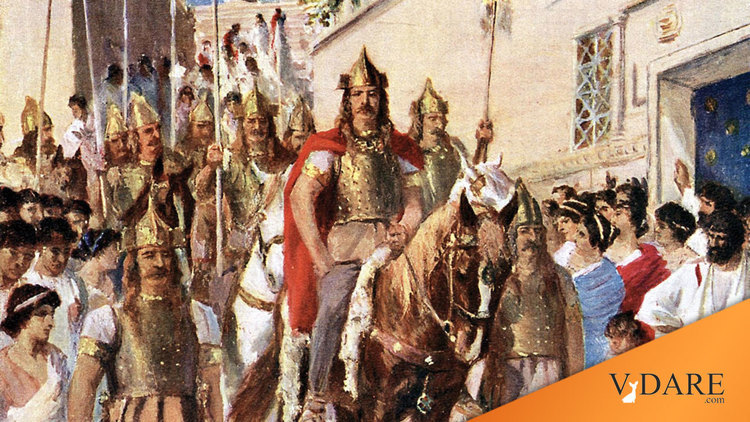 [Peter Brimelow writes: Great minds emote alike: the Wall Street Journal's James Tarantoad has just belatedly crawled (scroll down to ninth item) into the media chorus about immigrant soldiers described by Sam Francis in this column. Tarantoad concludes: "Therein lies a lesson for those who complain of American 'unilateralism': We are the world." Gee – and I thought we were America! That must be why he calls me a "nativist nabob."  I call it "Tarantreason."]

If the war with Iraq has accomplished nothing else, it has offered a bottomless bonanza for media celebrations of the New World America that the military side of the war is pounding into reality.

The New World America is what the United States will be after it is transformed by mass immigration and racial and sexual liberation into a multicultural, multiracial, unisex order managed by the global state.

The national media have missed no chance to preach about the role that immigrants, non-whites, and women are playing in the war. "A New War Brings New Role for Women," chirped a headline in the New York Times soon after the incident that led to the capture of Pfc. Jessica Lynch and the death of her sister-in-arms, Pfc. Lori Piestewa.

With the latter, a Hopi Indian, the New World media got a double-header of a sort, with the Washington Post carrying at least two large stories on her and the reaction to her death within her tribe: They believe her spirit returned home in an unseasonable snow storm soon after she died.

The New York Times featured a story headlined "Latinos Gave Their Lives To New Land," while the Post also informed us in a headline that "For Immigrants, [the war is] a Special Sacrifice."

What happened to the dozens of native Americans who gave their lives to their old land and why the war is any more of a sacrifice for immigrants than for non-immigrants was never very clear.

But some of the real loyalties of the immigrant members of the armed forces killed or missing in action in Iraq were.

Pfc. Diego Fernando Rincon from Colombia "flew a Colombian flag" from his civilian car. Marine Lance Cpl. Jesus A. Suarez Del Solar returned to Mexico just before signing up and "bought a figurine of the Aztec warrior he considered himself to be."  After living in the United States for six years and serving in the Marines for two, Cpl. Del Solar still refused to become an American citizen. "He was a proud Mexican," his father told the Post.

Of the 71 Americans killed in the war by the beginning of this week, eight (11 percent) were immigrants, while two immigrants were missing and two others had been captured.  Of the 12, only four were American citizens.  According to the Defense Department, nearly 3 percent of the active-duty military is composed of immigrants.

The desire to be an Aztec warrior is by no means the common motivation of most of them. The armed services appeal to the theme of upward mobility in recruiting messages, and (thanks to an executive order signed by President Bush last year) you can apply for U.S. citizenship after three years of service - two years earlier than civilian immigrants.

A member of the U.S. Army commented on the role of immigrants in the armed forces on VDARE.COM:

"Their loyalty is to the service, not the country," he wrote. "They would have no qualms about turning their weapons on U.S. citizens. A hundred years ago this meant some strikers might get fired on. Today what you see being unleashed on Iraq could be used on some place in the U.S. if the will of the central government was being thwarted."

Just so. As the Roman Empire neared its end, its armies also were filled with aliens who felt no loyalty to Rome and its institutions and in fact may have harbored age-old hatreds for them. Any soldier with the skills and money could win the legions over and become emperor himself — which is why so few rulers of the empire in its latter days died in their beds.

Much the same pattern is beginning to appear in the American army, which is already 3 percent non-American and will become even less American as mass immigration continues.

Today, even Americans join the army for the benefits offered, from high pay to learning job skills to enjoying a few years as a publicly-paid tourist.

Mass immigration is one of the costs of empire, as Rome discovered and as Great Britain and Western Europe are discovering today.

For the emerging American empire, the multicultural and multiracial mixture of peoples is not out of line with the historical pattern.

The difference, perhaps, is that earlier empires and their rulers were unable to see what was happening to their own peoples and cultures even as it happened.

Our rulers don't have that excuse.