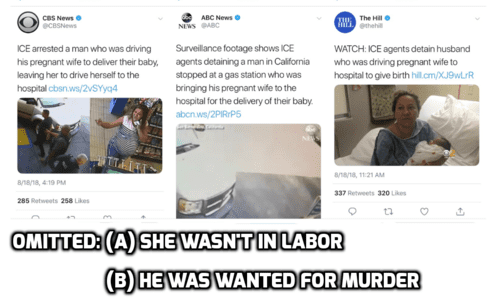 Man arrested by ICE while taking pregnant wife to hospital for delivery. That is the lead in many of the sob story media reports of a Mexican illegal alien's arrest.

Only after reading a number of paragraphs down do the reports mention that the pregnant wife, Maria del Carmen Venegas, was having a non-emergency C-section. That is, she was not in labor, she had a doctor’s appointment to give birth—at your expense. [San Bernardino man arrested while taking pregnant wife to hospital wanted for murder in Mexico, ICE says, By Amy Powell, ABC7.com, August 18, 2018]

Moreover, ICE says there is an outstanding warrant for homicide in Mexico for el padre, Joel Arrona-Lara.

Other miscellaneous items from this sob story are that this couple has been in the United States for 12 years. They are both illegal aliens and the newest child is number five. Neither Arrona-Lara nor his wife appear to speak English. She is 32 years old and he is 35. They have been busy.

What no reports include is that poor women, regardless of immigration status, receive Medicaid-funded delivery of their babies. They also receive five years of food subsidies under WIC, Women’s Infants Supplemental Food program. All US-born children are eligible for cash welfare benefits, SNAP, (food stamps) and Medicaid if they are poor and all five of the children are US-born.

This family of seven is a huge taxpayer burden and education costs have just begun. In California, educating one child costs $10K. So, 5 times $10K equals $50,000 per year in education costs alone. As Mr. Lara is the sole support of his family and works making bounce houses according to one article, we can be sure that he pays virtually no taxes.

The mother, Maria del Carmen Venegas, says that her husband has no criminal record and that the Mexican government is confusing him with his brother. Of course, Joel Arrona-Lara is criminal as he is in the country illegally.

This family is a huge burden on taxpayers and the husband may be a murderer. He needs to be deported and judging from the comment sections, most readers agree.