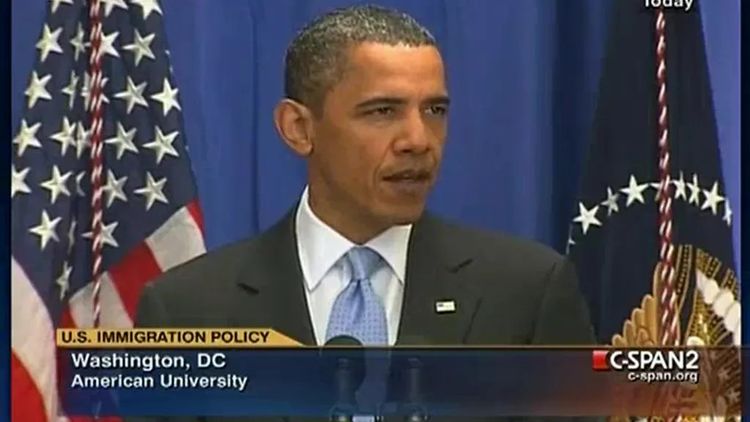 Obama Wrong—U.S. Not "A Nation Of Immigrants"

In his immigration speech on Thursday, President Obama heralded America as a "nation of immigrants" defined not by blood or birth, but by "fidelity to the shared values that we all hold so dear."

If only it were so. Left-wing academics and activists spurned assimilation as a common goal long ago. Their fidelity lies with bilingualism (a euphemism for native language maintenance over English-first instruction), identity politics, ethnic militancy and a borderless continent.

Obama blames "politics" for the intractable immigration debate. Whose politics? The amnesty mob has taken to ambushing congressional offices this week to scream at lawmakers to choose "reform" (giving a blanket path to citizenship to millions of illegal aliens) or "racism" (their description of any and every legislative measure to stiffen sanctions for and deter the acts of border-jumping, visa-overstaying and deportation-evading).

Is there no middle ground for all sides to agree that clearing naturalization application backlogs should take priority over expanding illegal alien benefits, or that tracking and deporting violent illegal alien criminals should take precedence over handing out driver's licenses to illegal aliens, or that streamlining the employee citizenship verification process for businesses (E-verify) and fixing outdated visa tracking databases should come before indiscriminately expanding temporary visa and guest worker programs?

Must every response to even the most modest of immigration enforcement measures be "RAAAAACIST"?

Further, as I've noted many times over the years when debating both Democrats and Republicans who fall back on empty phrases to justify putting the amnesty cart before the enforcement horse, we are not a "nation of immigrants." This is both a factual error and a warm-and-fuzzy non sequitur. Eighty-five percent of the residents currently in the United States were born here.

Even if we were a "nation of immigrants," it does not explain why we should be against sensible immigration control. The Founding Fathers were emphatically insistent on protecting the country against indiscriminate mass immigration. They insisted on assimilation as a pre-condition, not an afterthought. Historian John Fonte assembled their wisdom, and it bears repeating this Independence Day weekend:

As pro-amnesty extremists moan that "we didn't cross the borders, the borders crossed us" and illegal alien marchers haul foreign flags above Old Glory, President Obama pretends that the "common national sentiment" our Founding Fathers embraced still binds us all together.

Many of us still have faith in a strong, sovereign America—the unhyphenated, the law-abiding, the gratitude-filled sons and daughters and grandchildren of legal immigrants for whom such distinctions still matter.

But it's no thanks to the assimilation saboteurs who put "one world" over "one nation under God."