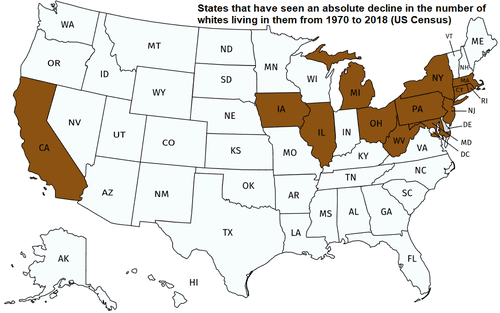 Audacious Epigone: States That Have Lost White People Since 1970

The indefatigable Ron Unz stirred the pot by publishing his formerly private missive from last year addressed to those on the alt right. Ron points out that even as California has become considerably less white over the last fifty years, white racial consciousness has even less purchase in the state now than it did then. If exposure to non-whites doesn’t lead to racial consciousness in whites, what will?

Part of the explanation is that blacks tend to cause whites more problems than Hispanics and Asians do. As the latter have moved into the state they’ve pushed the former out. Another part of the explanation is that whites most amenable to any sort of white consciousness are the whites who have been leaving the state over that same period. The US is a big, mostly empty country with a seemingly endless opportunity for white flight.

Relatedly, I’d had the vague impression that California was the only state in the country to have seen an absolute decline in the size of the non-Hispanic white population over the last fifty years. After all, the country has added over 120,000,000 people since 1970.

Vague impressions don’t cut it for a quant blog, though, so I crunched the numbers. As it turns out, thirteen states have fewer white people living in them today than they did in 1970. We’re not talking in terms of population percentages here–every state except for the Imperial Capital has seen a decline in its white population share over the last half century–we’re talking in terms of absolute numbers of white people: Another way of putting this is that 100% of the population growth over the last fifty years in New York, Illinois, New Jersey, Pennsylvania, Massachusetts, California, Connecticut, Ohio, Michigan, Rhode Island, Iowa, Maryland, and West Virginia has come from non-whites. From 1970 to 2018, California lost 427,000 whites while adding an utterly transformative 20,250,000 non-whites.